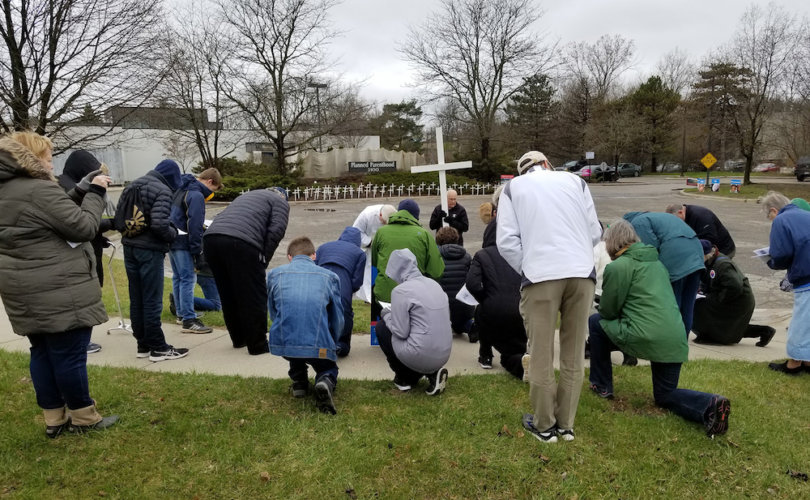 April 26, 2019 (LifeSiteNews) — The “Way of the Cross for Victims of Abortion” prayer services organized at abortion facilities across the nation last Friday bore fruit once again for the pro-life movement.

Thousands were expected to take part and local leaders reported higher attendance than in past years. They attribute this to the impact of the release of the movie Unplanned, along with the ongoing fight against extreme pro-abortion legislation in several U.S. states.

In all, 87 “Way of the Cross” services were held in 33 states on Good Friday.

The Pro-Life Action League coordinated the nationwide pro-life vigil, as it has annually since 2014.

There were many highlights from the various local sites.

Unborn children were saved from abortion during prayer services in Grand Rapids, Michigan, and Orange, California.

One of them was Bishop Daniel Conlon of the Diocese of Joliet, who led a group of 450 pro-life supporters outside THE largest abortion facility in the Midwest operated by Planned Parenthood in Aurora, Illinois.

That makes this one of the largest pro-life events to be held at Planned Parenthood Aurora since it opened in 2007, local organizers said, and the crowd included many who were attending this kind of public pro-life activity for the first time.

Illinois is one of the states where a fight is in progress at the state capitol over legislation to expand abortion. Local pro-lifers think that this, along with response to the Unplanned movie, and the fact Bishop Conlon took part had a hand in inspiring participation in Aurora.

Unplanned, based upon the story of Abby Johnson, a Planned Parenthood manager turned pro-life advocate, was credited for inspiring the National Pro-Life Candlelight Vigil, which took place April 13 at 166 Planned Parenthood abortion facilities in 40 states.

An estimated crowd of 3,800 people participated in the “Good Friday Way of the Cross for Victims of Abortion” in St. Paul, Minnesota, in a daylong event sponsored by Pro-Life Action Ministries.

Prayer service participants gathered in all types of weather — rain, shine, and in the case of Tallahassee, Florida, even a tornado warning.

For several participating cities, the “Good Friday Way of the Cross” is a decades-old tradition. It has been observed since 1999 in St. Louis, Missouri, since 1989 in Rochester, New York, and since 1973 in Pittsburgh, Pennsylvania.