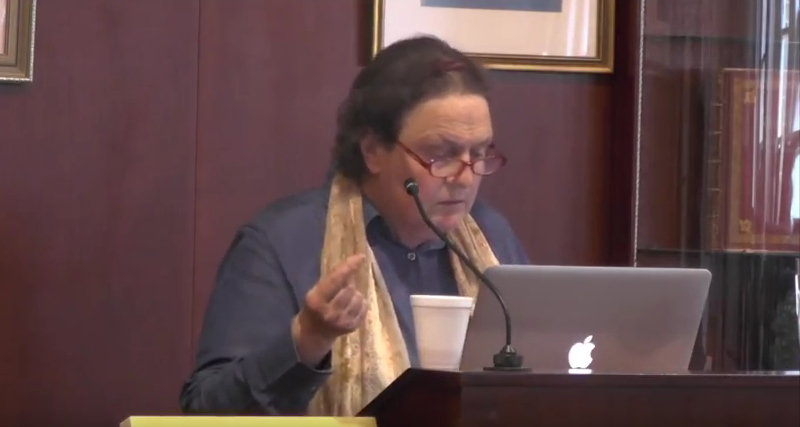 Dr. Anna M. Silvas, a professor at the University of New England and one of the world’s experts on the Church Fathers, delivered an especially blunt criticism of the exhortation.

June 14, 2016 (LifeSiteNews)—Prominent Catholic philosophers and a world  expert on the Church Fathers have joined the growing chorus of voices expressing deep concerns over the implications of Pope Francis’s controversial exhortation Amoris Laetitia.

“What was certain before has become problematic,” due to the pope’s signature ambiguity, wrote Dr. Jude P. Dougherty, the dean emeritus of the School of Philosophy at The Catholic University of America, in a column at The Wanderer.

The seeming “internal waffling” going on inside the Church over the issue of Holy Communion for the divorced and remarried is undermining the Church’s moral authority, Dougherty wrote, at a time when “Western civilization itself, detached from its classical sources, seems to be at stake.”

Following the release of Amoris Laetitia, cardinals and bishops who had argued for a change in sacramental practice claimed victory, arguing that footnote 351 of Amoris Laetitia opened the door for a significant change toward the sacraments for those in unions the Church teaches are objectively sinful.

Many orthodox Catholic writers agreed that Amoris Laetitia contradicts Church teaching on the issue and expressed concern that it will lead to sacrilege and rupture within the church.

With “one stroke of a pen,” Pope Francis turned “chaos into principle” and is leading the Church “into the direction of schism,” said Professor Robert Spaemann, a leading Catholic philosopher and close friend of Pope Emeritus Benedict XVI. Such a schism would not be “at the periphery, but in the middle of the Church,” he warned, asserting that Amoris Laetitia is a clear “breach” with Church teaching.

“His academic positions apart, what gives Robert Spaemann authority is the natural law tradition which he represents and to which the Church herself is accountable,” wrote Dougherty.

The Church did not invent morality, but over the centuries it has promulgated the highest moral principles known to mankind. Clearly, discipline related to the divinely instituted sacraments is her province. Through the sacraments she has taught and promoted personal moral behavior. That achievement has contributed beyond measure to the creation of Western culture.

‘We have lost all foothold’ like Alice in Wonderland

Dr. Anna M. Silvas, a professor at the University of New England and at the Australian Catholic University and one of the world’s top experts on the Church Fathers, delivered an especially blunt criticism of Amoris Laetitia “before a packed crowd with bishops and priests” in Melbourne Australia. Prominent Italian Catholic journalist Sandro Magister re-published the entire commentary on his blog Chiesa and called it “a must-read. Brilliant, acute, expert, straightforward. A luminous example of that “parresìa” which is the duty of every baptized person.”

Silvas wrote that Amoris Laetitia undermines Church doctrine by embracing Cardinal Walter Kasper’s proposal that those in unions the Church considers to be adulterous be permitted in some circumstances to receive Holy Communion.

She criticized the document’s ambiguity and subjectivism, Pope Francis’s “language of emotion” that is more reflective of the “mentality of the popular media” than the Church Fathers, and Amoris Laetitia’s “long tracts of homespun avuncular advice that could be given by any secular journalist without the faith” that are often completely bereft of any mention of Christ.

“Even the most pious reading of ‘Amoris Laetitia’ cannot say that it has avoided ambiguity,” wrote Silva.

Silva also dissected Amoris Laetitia’s introduction of the notion that one can be in an objective situation of mortal sin yet still be living and growing in God’s grace. The Catechism of the Catholic Church teaches that mortal sin “results in the loss of charity and the privation of sanctifying grace, that is, of the state of grace. If it is not redeemed by repentance and God's forgiveness, it causes exclusion from Christ's kingdom and the eternal death of hell” (CCC 1861).

The new doctrine that Pope Francis had flagged a little earlier he now repeats and reasserts: a person can be in an objective situation of mortal sin – for that is what he is speaking about – and still be living and growing in God’s grace, all the ‘while receiving the help of the Church’, which, the infamous footnote 351 declares, can include, ‘in certain cases’, both confession and holy communion. I am sure that there are by now many busily attempting to ‘interpret’ all this according to a ‘hermeneutic of continuity’, to show its harmony, I presume, with Tradition. I might add that in this n. 305, Pope Francis quotes himself four times. In fact, it appears that Pope Francis’ most frequently cited reference through ‘Amoris laetitia’ is himself, and that in itself is interesting.

“I feel that we have lost all foothold, and fallen like Alice into a parallel universe, where nothing is quite what it seems to be,” wrote Silva.

Quoting the words of Jesus Christ, “Whoever divorces his wife and marries another, commits adultery against her” (Mk 10:11) and the apostle Paul, “She will be called an adulteress if she lives with another man while her husband is alive” (Rom 7:3), Silva wrote:

Like a deafening absence, the term “adultery” is entirely absent from the lexicon of “Amoris Laetitia”. Instead we have something called “’irregular’ unions”, or “irregular situations”, with the “irregular” in double quotation marks as if to distance the author even from this usage.

“If you love me”, says our Lord, keep my commandments (Jn 14:15), and the Gospel and Letters of John repeats this admonition of our Lord in various ways. It means, not that our conduct is justified by our subjective feelings, but rather, our subjective disposition is verified in our conduct, i.e., in the obediential act. Alas, as we look into AL, we find that “commandments” too are entirely absent from its lexicon, as is also obedience. Instead we have something called “ideals”, appearing repeatedly throughout the document.

Other key words I miss too from the language of this document: the fear of the Lord. You know, that awe of the sovereign reality of God that is the beginning of wisdom, one of the gifts of the Holy Spirit in confirmation. But indeed this holy fear has long vanished from a vast sweep of modern catholic discourse. It is a semitic idiom for “eulabeia” and “eusebia” in Greek, or in Latin, “pietas” and “religio”, the core of a Godward disposition, the very spirit of religion.

Another register of language is also missing in “Amoris Laetitia” is that of eternal salvation. There are no immortal souls in need of eternal salvation to be found in this document! True, we do have “eternal life” and “eternity” nominated in nn. 166 and 168 as the seemingly inevitable “fulfillment” of a child’s destiny, but with no hint that any of the imperatives of grace and struggle, in short, of eternal salvation, are involved in getting there.

The real Pharisees: ‘Cardinal Kasper and his allies’

“The entire tenor of chapter eight is problematic, not just n. 304 and footnote 351,” wrote Silva of the exhortation’s most controversial portion. “As soon as I finished it, I thought to myself: Clear as a bell: Pope Francis wanted some form of the Kasper proposal from the beginning.”

“Here it is. Kasper has won,” she continued. “It all explains Pope Francis’ terse comments at the end of the 2015 Synod, when he censured narrow-minded ‘pharisees’ – evidently those who had frustrated a better outcome according to his agenda. ‘Pharisees’? The sloppiness of his language! They were the modernists, in a way, of Judaism, the masters of ten thousand nuances – and most pertinently, those who tenaciously upheld the practice of divorce and remarriage. The real analogues of the pharisees in this whole affair are Kasper and his allies.”

Throughout his papacy, Pope Francis has criticized “narrow-minded,” “rigid” Catholics. In his closing speech at the 2015 Synod on the Family, Pope Francis condemned Catholics who “hide behind the Church’s teachings” and “sit in the chair of Moses and judge, sometimes with superiority and superficiality, difficult cases and wounded families.”

Footnote 351 implies that in an objective situation of sin, “it is possible for the miscreant to be subjectively innocent,” wrote Dougherty. But the problem this footnote presents is that of a confessor who “may become aware that a penitent has not confessed a sin because he has no idea that it is a sin. If this be the case, the penitent can validly receive absolution.”

In other words, if a Catholic doesn’t know that his conduct is sinful, then he’s not fully liable for it.

“But the confessor is obliged to set matters straight by correcting the malformed conscience and by guiding the penitent through the process of forming a correct conscience,” continued Dougherty. “The key question then becomes: ‘Can this doctrinally well-founded practice be extended to the divorced and remarried?’ The answer is ‘No.’ The penitent, once made aware that his conduct is at odds with the teaching of the Church, must refrain from Holy Communion.”

The next battle: Church recognition of same-sex unions?

Amoris Laetitia seems to embrace situational ethics—the notion that morality varies by circumstance—by corrupting and twisting the teachings of Pope St. John Paul II and the Second Vatican Council, Silva wrote. The historian predicted that the Church will soon face a similar battle over same-sex unions.

“If it is possible to construct a justification of states of objective adultery, on the basis of recognizing ‘the constructive elements in those situations not yet corresponding to the Church’s teaching on marriage’ (n. 292), ‘when such unions attain a particular stability, legally recognized, are characterized by deep affection and responsibility for their offspring’ (n. 293) etc., how long can you defer applying exactly the same line or reasoning to same-sex partnerships?” she asked.

Church leaders “will have to make practical dispositions in regard to the thorny issues of ‘Amoris Laetitia,’” and they have an obligation to speak the truth, Silva concluded. Silva warned bishops that they must be prepared for the persecution that can come from within the Church for defending the faith:

…in our own minds, we should have no doubt teaching of the Gospel is, and ever will be. Obviously, whatever strategy of pressing for an official clarification of projected pastoral practice that can be devised, must be tried. I particularly urge this on bishops. Some of you may find yourselves in very difficult situations in regard to your peers, almost calling for the virtues of a confessor of the faith. Are you ready for the whipping, figuratively speaking, you may incur? You could of course, choose the illusory safety of conventional shallowness and superficial good cheer, a great temptation of ecclesiastics as company men. I don’t advise it. The times are serious, perhaps much more serious than we suspect. We are being put to the test. “The Lord is here. He is calling you”.