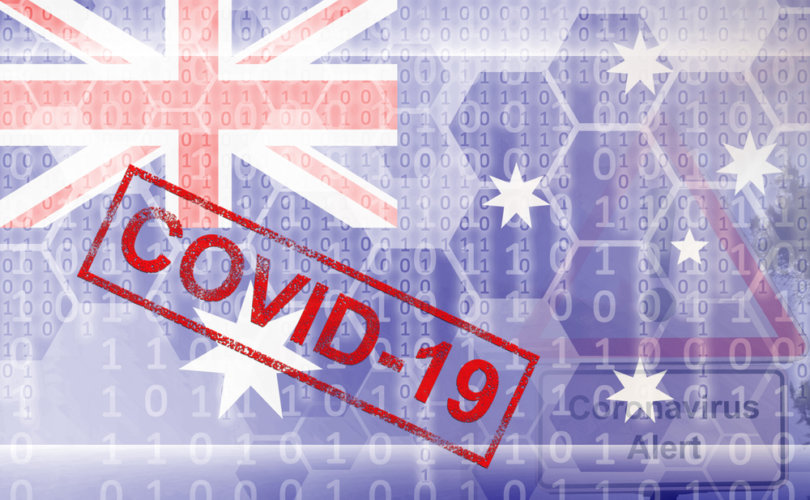 (LifeSiteNews) — Over 20 countries answered Australia’s December 4 SOS call to protest the tyrannical restrictions being imposed on Australian citizens under the banner of COVID safety measures.

Crowds of hundreds and thousands of people gathered in front of Australian embassies and consulates across Europe, Asia, and North America in response to a worldwide call for help and to increase the visibility of the harsh and increasingly punitive measures which Australians have been subjected to in the wake of the coronavirus crisis.

Protestors in Finland, Britain, Spain, the Netherlands, Portugal, the U.S., Canada, South Africa, Russia, Germany, France, Ireland, Italy, Mexico, Japan, Romania, Israel, and others all joined together to speak with one voice in support of the freedom of Australians to make their own medical decisions without facing penalties, with many noting that Australia is being used as a kind of test ground for a broader implementation of COVID passport systems and quarantine camps.

At the Australian consulate in New York City, hundreds of protestors could be seen gathered, waving Australian flags in solidarity with those Down Under and displaying signs with messages which read: “We are with you” and “How long until this comes to America?”

The group can be heard chanting “free Australia!”

Rallying the crowd, a speaker said fighting for Australia means fighting for Americans and others around the world who are subject to encroaching tyranny.

“Here in New York City, we fight … for liberals, fight for conservatives, fight for religious people, fight for everybody to have the right to say ‘No,’” he added, in reference to the choice to take the abortion-tainted COVID jabs. “The right to choose, that is all that that we are looking for. And in Australia right now, that right to choose has gone.”

#sosfromaustralia : SOS Australia/Anti-Mandate protesters from New York are marching to Times Square from the Australian consulate where they held a rally… pic.twitter.com/QHPvX26bw9

Portuguese man Alfredo Rodrigues shared a video message explaining that more than 100 people gathered before the Australian embassy in Lisbon, the nation’s capital, in answer to the SOS.

“You are nice people, and that is probably the reason you are suffering so much,” Rodrigues commented. “Because the people that are doing all these wrongs [to] you are cowards … because they know you don’t react violently and that’s why it’s so difficult for us to see, to watch the news on how you are being treated in this incredible country that you have built with your blood, sweat, and tears.”

Continuing, Rodrigues said that the Portuguese stand with Australia since “your fight is our fight.” “Count on us, we count on you. Stand your ground, don’t give up … We are going to win this war, this battle, which is the battle of our lives.”

A group from Romania protested outside the Australian consulate in Bucharest, holding signs showing that Romanians have responded to Australia’s distress call and calling for an end to the lockdowns and medical tyranny plaguing the island nation.

Prominent European politicians spoke out publicly, deriding the cruel and totalitarian regime sweeping across the once flourishing democracy as being in “clear violation of human and citizen rights.”

Earlier in the year, Polish members of parliament from the pro-freedom Confederation Liberty and Independence Party came together in front of Warsaw’s Australian embassy, criticizing the Australian government’s use of lockdowns as “totalitarianism” and comparing their radical political tactics to those of North Korea.

Confederation Chairman Jakub Kulesza recognized the brutality of the Australian police force, which he said has taken to “oppress, harass, and attack peaceful citizens by depriving them of their fundamental freedoms and liberties.”

In all, Kulesza noted that the panorama of measures in place apparently to stop the spread of the virus have been to no avail, since the country has seen “record increases in these infections,” all of which demonstrates that “drastic restrictions do not make sense.”

“It’s hard to call it anything else but madness,” he added.

Christine Anderson, a German Member of the European Parliament, spoke out on December 4 in support of Australia’s protest, blasting the Australian government’s restrictions as not being “about breaking the fourth wave; it is all about breaking people.”

“Australia does not need a ‘no COVID strategy.’ What Australia needs is a ‘no oppression strategy,’” Anderson charged. “I will do whatever I can to make it known to the world that your once-free and liberal democracy has been transformed into a totalitarian regime which tramples on human rights, civil liberties, and the rule of law.”

Addressing those who might believe that the restrictions are in the best interests of the public, Anderson explained that “at no point in history have the people forcing others into compliance been the good guys.”

“The welfare of humanity has always been the alibi of tyrants,” she continued. “Do you not realize that this vaccine does not protect you from COVID? It does, however, protect you from governmental oppression … for now that is, but don’t think for even a second that this is not going to change tomorrow.”

Standing in support with Australia’s fight for freedom, Anderson urged listeners to “stop our governments from transforming our free and democratic societies into totalitarian regimes.”