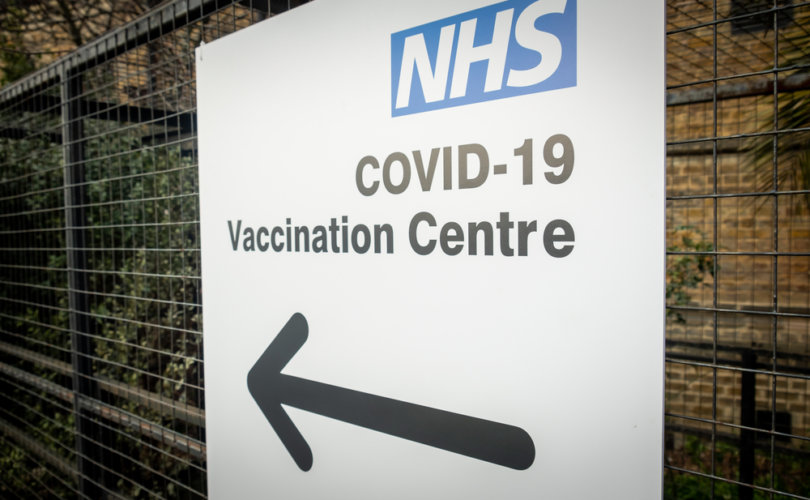 SHEFFIELD, England (LifeSiteNews) – Healthcare staff at Britain’s National Health Service (NHS) gathered in protest outside a hospital in Sheffield earlier this month ahead of a sweeping “no jab, no job” mandate for frontline workers set to force more than 80,000 staff members into unemployment on April 1.

Health workers and concerned citizens alike gathered to protest the punishing measures, which will require staff who come into contact with the public to have received a full regimen of abortion-tainted COVID shots before April 1, meaning that the NHS could start laying people off as early as February 3, the latest date to have received the first shot before being able to have the second in time for the deadline.

An NHS cardiographer at the protest warned that the health service will become crippled by the mandate, with so many jobs at risk. “We stand to lose a lot of staff. Just in my department alone [there are] around 10 of us, but I know there’s around 1,500 or more just in Sheffield [who] are going to be forced to either take the jab or lose their jobs.”

She added that her experience with patients in the last few months has convinced her not to receive one of the experimental shots, especially given that she considers herself to have antibodies against the novel coronavirus.

“I don’t want the jab because I’ve seen patients come in … probably 20 patients a day, and three of those on average come in with things like palpitations, arrhythmias” after their inoculation, she warned. “But I’ve also seen two patients that have had blood clots from the injection, and I only went back to work in October after maternity. So, yeah, it scares me that they’re going to sack us for what really is something that should be personal choice.”

A student nurse preparing to complete her course later this year explained that she is being forced out of her degree if she won’t submit to the jab mandate, despite having only six months left before graduating and a looming shortage of nurses within the health system.

“I just don’t agree with all this forced vaccination. I think it’s wrong and I feel like we need to be heard,” the student said.

One protester complained that “we are losing our medical freedom,” with the introduction of medical-based segregation, arguing that “whether you’re NHS staff or just a member of the public [we should] have the right to choose over what is put in our bodies.”

Continuing, she observed that “NHS staff for the last 21 [or] 22 months have been fine to look after ill people in hospital and care homes everywhere, and suddenly they’re not going to be good enough after the first of April.”

Another member of the pubic at the demonstration agreed, adding that “we believe that everybody has the right to choose” when it comes to taking the shots.

A retired NHS employee and his two daughters, both of whom are nurses within the system, joined the protest, with the father revealing that his daughters are both prepared to sacrifice their employment before taking one of the experimental shots.

With both daughters having decided against the jab, he said that the NHS is “putting immense pressure on them at work to be vaccinated.”

“By the third of February,” he continued, “they will receive 12 weeks’ notice and they’ll be sacked. It’s just bullying; they bully them into something they’re not going to do [but] they’re quite prepared to give their jobs up.”

The system, he said, is already “on its knees now, so it’ll just collapse.”

A longtime employee of the NHS added her voice to calls for the mandate to be stopped, stating that, having worked for the health system for many years, she has “always followed every rule, regulation, but I do feel now that my human rights are being infringed upon because I don’t want to take an experimental vaccine.”

Speaking about the risks involved with the jabs, one demonstrator noted that there is no clear evidence that the jabs are providing the protection claimed by government officials, and that, while some of the science surrounding the shots is unclear, the choice to take an injection should be at the individual’s discretion.

He said that normally, with surgeries for example, “doctors always explain to you that there is some risk with this, and it’s your choice if you’re going to have the procedure. Vaccines are no different.”

“Some vaccines are very, very good. They’ve saved millions of people. Some vaccines, the evidence is perhaps not so clear and there have been in history vaccines which have been actually harmful.”

He added that, with vaccination, “there is always a risk, and as a person, you always have to be the one who makes that choice because it’s your own body, it’s your own health, and you have to live with that the rest of your life if something goes wrong.”

Indeed, the U.S. Vaccine Adverse Event Reporting System (VAERS) has recorded some 1,033,994 injuries after reception of the available jabs against COVID-19, including 21,745 deaths.

Data emanating from several countries that have introduced vaccine passes show that the jabs do not lead to a reduction in so-called viral cases, including the U.K., which earlier this month reported record infections and higher COVID rates among vaccinated people in all age groups over 18 years old. The vaccinated have likewise come to dominate COVID hospitalizations and deaths in the U.K. and other highly vaccinated European nations, as well as parts of the United States.

Leading medical experts have also warned of serious injuries linked to the injections. The spike proteins in mRNA COVID vaccines, like those produced by Moderna and Pfizer, are “pathogenic” and “lethal to some,” Texas cardiologist and COVID-19 expert Dr. Peter McCullough lamented last fall.