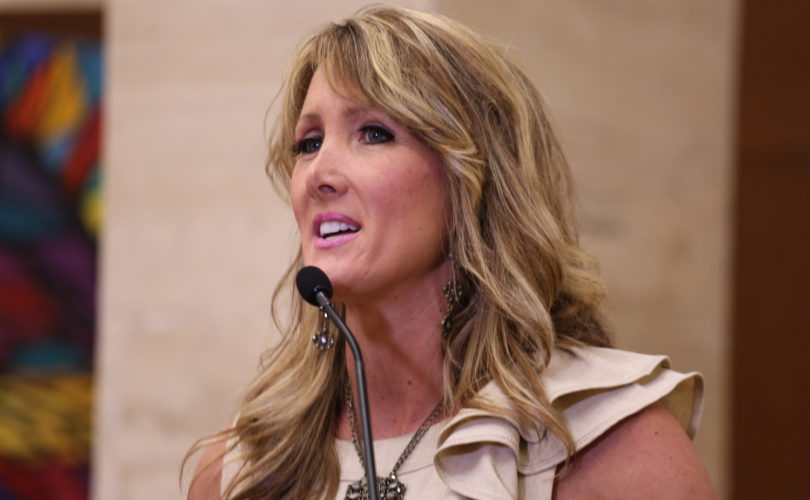 WASHINGTON, D.C., Jan. 24, 2013 (LifeSiteNews.com) – Pro-life leader Rebecca Kiessling, who was conceived in rape when her mother was abducted at knifepoint, says pro-lifers are guilty of discrimination if they are willing to compromise by including exceptions for rape in pro-life legislation.

Speaking at the Law of Life Summit in Washington, D.C. the day before the 40th annual March for Life, she lamented that “so many people, pro-life people … think nothing of discriminating against children who are conceived in rape.”

“Let me tell you, to those who think that sometimes you just need to compromise: we are not cannon fodder,” said Kiessling, who is a national spokesperson for Personhood USA and an attorney with Alliance Defending Freedom. “You do not get to put us out on the front lines and take a giant step back, and you do not discriminate.”

The question of exceptions such as rape and incest divides pro-life leaders. Many argue for restricting abortion as much as possible, even if it means passing imperfect laws that the movement would not pursue as an end goal.

One of the more prominent examples in the U.S. is the Hyde amendment, which prohibits the federal government from funding abortion except in cases of rape, incest, and the life of the mother. The exceptions were added in 1993 as a compromise with President Bill Clinton to save the amendment.

But others argue that the rape exception amounts to unjust discrimination, and is thus intrinsically evil, so cannot be justified even in pursuit of the laudable goal of restricting abortion.

In her brief address, Kiessling said her mother tried to get an abortion but was only saved because, at the time, Michigan had a total ban on abortion.

“My birth mother did not choose life for me, she chose abortion,” she explained. “Pro-life leaders chose life for me. Those who, without even knowing of my exact existence, recognized that mine was a life worth saving. And they made sure abortion was illegal in Michigan even in cases of rape. One hundred percent pro-life, no exceptions, no compromise. I owe my life to them. And that’s why I try to do the same for others.”

Commenting on the argument that it’s extreme to “force” a woman to carry her rapist’s baby, she said, “We are not the rapist’s baby. I’m my mother’s child, I’m a child of God.”

“I think it’s extreme to tell another living human being that they are garbage,” she continued. “That they’re not worthy of living, and that they didn’t deserve to be protected. They are the ones who are being extreme, and we need to be prepared to point that out.”