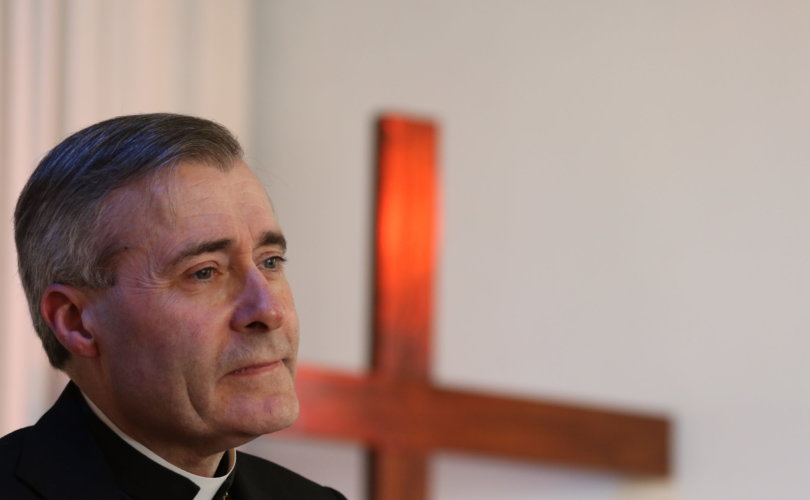 SHREWSBURY, England, October 12, 2016 (LifeSiteNews) — While the Catholic Church must minister to people with real psychological confusion over their sexuality, it “can never compromise the truth” that our gender and sexuality are God-given and flow directly from our biological bodies, Bishop Mark Davies of Shrewsbury told educators in parishes and private Catholic schools in his diocese.

Once described by the Catholic Herald as “probably the most passionately orthodox bishop in England today,” Davies echoed the great English Catholic apologist G.K. Chesterton in stating, “I have often warned that, in that vacuum left by the loss of Christian faith within contemporary society, new ideologies would emerge.”

(Chesterton wrote, “When men choose not to believe in God, they do not thereafter believe in nothing, they then become capable of believing in anything.”)

Bishop Davies went on to cite “the Popes, from Saint John Paul II to Pope Francis” [who] have warned that the radical ideology of gender would challenge the truth about the human person. In this short letter, I write to remind you of their word.”

While Pope Francis’ admonitions regarding “gender ideology” are well known, Bishop Davies relied on Pope Benedict XVI for a definitive explanation for the “thinking” behind the raft of national and local laws proliferating in Western democracies. In a December 12, 2012, address to the Roman curia, Benedict said:

“According to this philosophy, sex is no longer a given element of nature that man has to accept and personally make sense of; it is a social role that we choose for ourselves, whereas in the past it was chosen for us by society.”

Calling this a “profound falsehood” and an “anthropological revolution,” Benedict said it empowered believers to “dispute that they have a nature, given by their bodily identity, that serves as a defining element of the human being.”

Bishop Davies also quotes Pope Francis in his letter to the Church, The Joy of Love. Gender ideology, Francis warned, “denies the difference and reciprocity in nature of a man and a woman and envisages a society without sexual differences, thereby eliminating the anthropological basis of the family. This ideology leads to educational programs and legislative enactments that promote a personal identity and emotional intimacy radically separated from the biological difference between male and female.”

Bishop Davies said Pope John Paul II provided “a providential guide” to resist gender ideology in his Theology of the Body, where he stated, “No amount of scientific exploration can replace the truth that our bodies reveal us, giving form to our innermost being a unique personality.”

He also cited John Paul II making this prescient statement in his 1994 Letter to Families that seems to anticipate gender ideology. “Modern rationalism does not tolerate mystery. It does not accept the mystery of man as male and female, nor is it willing to admit that the full truth about man has been revealed in Jesus Christ.”

Bishop Davies is careful to insist, “We must always show genuine love and understanding to those who are swayed or fall victim to the errors of our times. However, we can never compromise the truth of our faith nor allow the truth about the human person to be obscured, for that would be a false charity.”

Bishop Davies ends his exemplary letters to school principals and religious education directors by promising that early in the new year the Diocese of Shrewsbury would organize study sessions to reflect on “the implications of this radical, ideological challenge.”