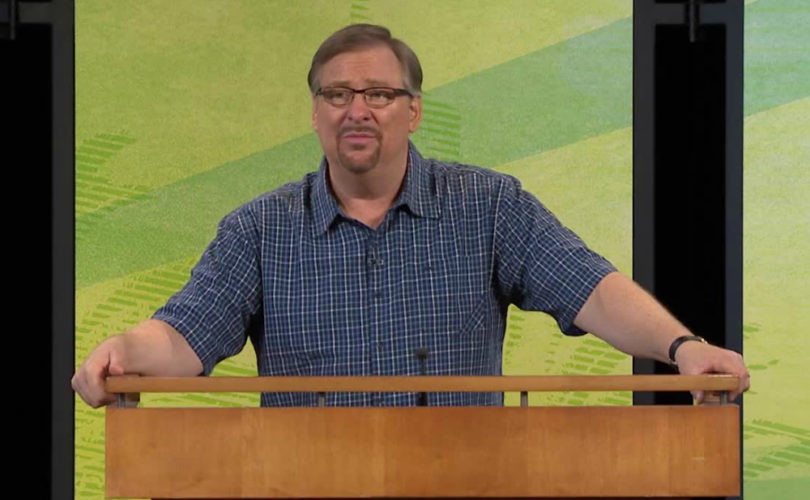 Two prominent Protestant pastors defended marriage at the Vatican, saying the Church must fight against the sexual revolution and stand for Biblical truth about marriage and sexuality.

“To redefine marriage would destroy the picture that God intends for marriage to portray, and we cannot cave on this issue,” Warren said. “It's a picture of Christ and his Church.”

“What are we going to do about this?” he said, according to a report from Christian Today. “The Church cannot cower in silence. The stakes are too high.”

Never give up and never give in, was Warren’s message, saying the Church cannot be salt and light in a crumbling culture if it caves in to the sexual revolution and fails to provide a counter-cultural witness.

Warren called it a “total myth” to have to compromise and give up on biblical truth and marriage in order to evangelize.

Pope Francis convened the Vatican conference, titled, “An International Interreligious Colloquium on The Complementarity of Man and Woman,” a month after the Extraordinary Synod on the Family, which closed surrounded by controversy over its communication handling, controversial proposals made by some at the synod, and wide media speculation that the Synod meant the Catholic Church would change its approach toward homosexuality and Communion for divorced and remarried Catholics.

Warren cited doctrine at the Humanum conference familiar to Catholics as Pope St. John Paul II’s Theology of the Body, explaining that God reveals his presence and his character through marriage.

Warren said too that gender ideology “confuses our identity and destroys our dignity” and that the covenant of marriage and the act of sex parallel an intimate relationship with God.

“Marriage can only be between a man and a woman,” he told the Vatican gathering, quoting Ephesians chapter five, which brands marriage as a reflection of Christ's love for the Church.

“This is the deepest meaning of marriage. This is the most profound purpose of marriage,” Warren said. “And this is the strongest reason why marriage can only be between a man and a woman.”

Warren went on to say that no other relationship, including that of parent and child, can depict this intimate union of Christ and his Church.

Moore denounced the sexual revolution’s damage to sexual relationships and the family.

He said sexual liberation had created “a culture obsessed with sex” that had led to a “boredom of sex shorn of mystery,” according to Charisma News.

He told the Vatican conference that the sexual revolution appeared to have imposed a “new patriarchy” that enabled men to “pursue a Darwinian fantasy of the predatory alpha male” for the pursuit of “power, prestige and personal pleasure.”

“Does anyone really believe these things will empower women and children?” he asked. “We see the wreckage of sexuality as self-expression all around us, and we will see more yet.”

He talked after the conference about absent fatherhood, saying every congregation he knows is realizing the harm caused by “deadbeat fathers” who desert their responsibilities after a divorce.

Warren expressed the unending truth of marriage as designed by God at the conference, and spoke of how this is degraded by many today.

“The Bible says you are to honor marriage,” he said. “Sadly, today we all know marriage is dishonored by a lot of people.”

“It's dismissed as archaic, man-made tradition. It's denounced as an enemy of women, it's demeaned in movies and television and it's delayed out of fear that it will limit one's personal freedom,” Warren continued. “So today instead of being honored, marriage is ridiculed, resented, rejected and redefined.”

Addressing the issue of remaining steadfast in the face of today’s culture, Warren told those meeting at the Vatican that “the only way to always be relevant, is to be eternal.”

“The Church must remain strong in its values, and continue to uphold the traditional teaching of marriage and the male-female relationship, despite cultural pressures,” Warren stressed. “It should lead the crowd, not follow it.”

The Humanum conference ran from November 17-19 and gathered some 30 speakers from roughly two dozen countries.