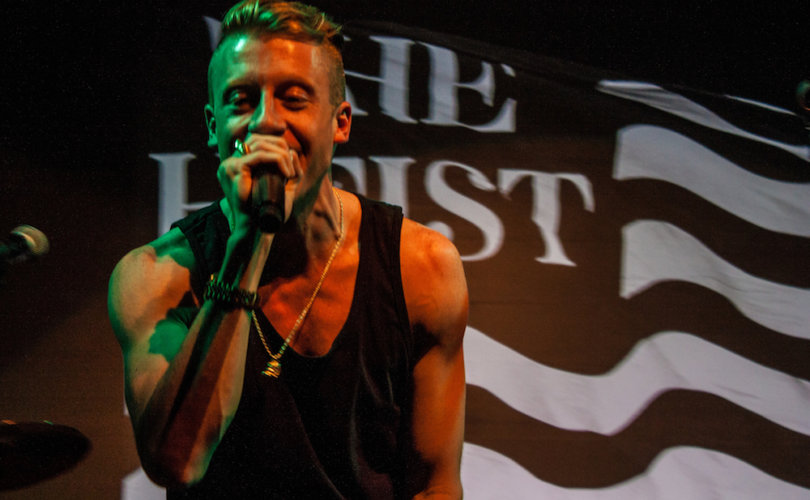 TORONTO, October 12, 2016 (LifeSiteNews) —  U.S. rapper Macklemore, whose song “Same Love” became an anthem for the campaign for homosexual “marriage” in the United States, will perform at WE Day Toronto on October 19, an event expected to draw some 20,000 students ages 12 and up from public and Catholic schools across the region.

Another performer in the multi-star lineup at the Air Canada Centre is U.S. rapper and dancer Jason Derulo, whose repertoire includes such ditties as “Talk Dirty” and “Get Ugly,” and who has let it be known he finds it annoying not to have sex on the first date.

Some will remember the Seattle-based rapper Macklemore performing “Same Love” at the January 2014 Grammy Awards, making the sign of the cross as he intoned: “If  you preach hate at the service/Those words aren’t anointed/And that holy water that you soak in, is then poisoned,” while 33 couples, many of them homosexual pairings, were “married” by Queen Latifah and serenaded by Madonna in a white satin tuxedo and white cowboy hat.

The emotional audience, many moved to tears and all to a standing ovation, included an enthusiatic Craig Kielburger, the famed child rights activist from a Catholic family (as is Macklemore) who at age 12 founded with his brother Mark the Free the Children charity to fight child poverty and oppression.

In July 2016, Free the Children was rebranded and, along with the Me to We “social enterprise,” became WE — a movement that “empowers people to change the world.”

WE Days are the “manifestation” of WE, and the high-energy, stadium-sized, dazzling and rapidly multiplying events feature celebrities, entertainers, and motivational speakers who exhort their idealistic and impressionable audience to be agents of change.

The students “earn” their right to attend WE Day by signing on to the WE Schools program, in which they commit to one global and local action for change during the academic year.

But as Tanya Granic-Allen, president of the parents’ advocacy group, Parents As First Educators (PAFE), pointed out: “Changing the world doesn’t have to involve a school trip to witness vulgarity.”

“Macklemore’s music includes extreme profanity, God-bashing, and immoral propaganda. I doubt there’s a parent out there who wouldn’t have an issue with the WE Day lineup,” Granic-Allen, a mother of four, told LifeSiteNews in an email.

“Certainly, many parents in Ontario would be shocked to hear their children are being taken on a field trip to listen to an artist whose repertoire includes ‘Fake ID’ and ‘Penis Song,’” she observed.

“Is this what Kathleen Wynne had in mind when she was asking students to use the proper names of genitalia?” added Granic-Allen, with a nod to an ongoing battle between parents’ rights groups and the Liberal premier over her radical sex-ed curriculum, rolled out in the fall of 2015.

“Some of the charitable outcomes of the WE Day initiatives are wonderful,” Granic-Allen pointed out.  “However, throwing the good and the vulgar at students hardly makes for a proper educational experience.”

WE lists a number of Catholic school boards as educational partners, including Ottawa, Toronto, Halton, Edmonton, Calgary, and the Archdiocese of Chicago Catholic Schools in the U.S.

The Toronto District Catholic School Board did not return a request for comment from LifeSiteNews by deadline.

And aside from Macklemore’s pro-homosexual “marriage” campaigning, and the mega-show’s penchant for booking celebrities with questionable class — rapper Big Sean in Toronto, Jennifer Lopez in Vancouver in 2014, Kardinal Offishall in Ottawa in 2015 — or abortion advocates such as Harry Potter film star Emma Watson in Ottawa 2015  — there are other troubling issues with WE and its Days.

Mark Kielburger admitted in March 2011 in a letter to the Ottawa Catholic School Board that the then Free the Children charity stocked contraceptives at their Baraka Medical Clinic clinics in Kenya. The Kenyan bishops asked Canadian and U.S. Catholics to stop funding the charity for this reason.

The brothers signed a Mother’s Day Manifesto in 2011 denouncing the Conservatives’ planned funding cuts to the International Planned Parenthood Federation, describing the abortion provider as “an organization that provides reproductive health services abroad,” and the government’s action “paternalistic refusal to offer women in Africa the same rights offered to women in Canada.”

The Kielburgers stated in 2012 that they are Catholic but take no position on abortion.

In 2014, the organization defended the hire of an employee who worked directly with children while moonlighting as a graphic sex-show performer in a homosexual-themed troupe. The employee stepped down only after LifeSiteNews went public with the story.

Liberal Prime Minister Justin Trudeau, a self-proclaimed Catholic who is an abortion extremist, appeared at WE Day Ottawa in November 2015. Trudeau, who does not allow Canadians with pro-life convictions to run as candidates in his party, promoted increased abortion access in Canada, and internationally, and is enshrining transgender rights and the gender ideology into law.

There are 10 WE Days scheduled across Canada for the 2016-17 school year, four in the United States and one in London, England.