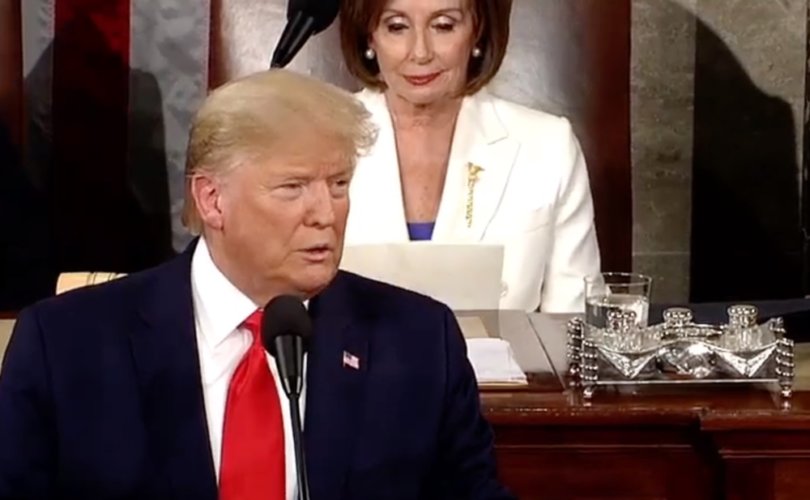 WASHINGTON, D.C., February 4, 2020 (LifeSiteNews) – President Donald Trump pledged his administration will continue to defend religious liberty Tuesday night, as part of “reasserting the culture of American freedom” in his annual State of the Union address.

“With every action my administration is restoring the rule of law and reasserting the culture of American freedom,” the president said, noting that he and the Republican Senate “have confirmed a record number of 187 new federal judges to uphold our Constitution as written,” with “many” additional jurists “in the pipeline.”

“My administration is also defending religious liberty, and that includes the constitutional right to pray in public schools,” Trump continued. “In America, we don’t punish prayer. We don’t tear down crosses. We don’t ban symbols of faith. We don’t muzzle preachers and pastors. “In America, we celebrate faith. We cherish religion. We lift our voices in prayer, and we raise our sights to the glory of God.”

To conservatives, judicial nominees have been a highlight of Trump’s presidency, with most of his picks greatly pleasing pro-life and pro-family advocates. Religious liberty has also been a priority of this administration, from lifting the Obama administration’s contraception mandate to establishing a White House office tasked with fielding the concerns of religious Americans and monitoring threats as they arise.

Last month, the administration released a guidance affirming students have the right to pray in public schools.

Earlier in his address, Trump called on Congress to ban late-term abortions, declaring “we must all agree that every human life is a sacred gift from God.”