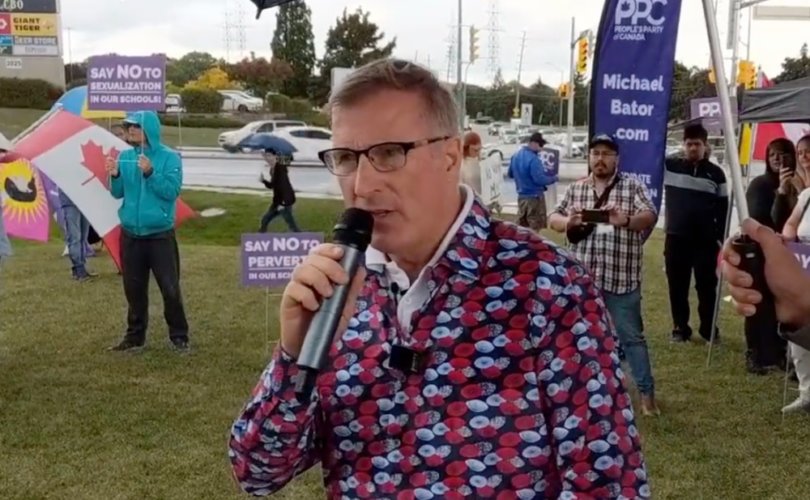 (Editor’s note: Contained in the article is a link to a tweet showing disturbing footage of the teacher wearing the fake breasts. Reader discretion is advised.)

(LifeSiteNews) – Maxime Bernier, the leader of the People’s Party of Canada, blasted a Canadian high school teacher who showed up to school wearing massive prosthetic breasts, saying the “pervert”  instructor should “stay home.”

“What we are asking for here today, is to have that teacher – just say to him, ‘good-bye, stay at home. We don’t want you in our school,’” said Bernier at a rally in Burlington, Ontario this Sunday.

As a result, last Friday hundreds of students and parents parents held a protest outside Trafalgar High School.

Fox News host Tucker Carlson called the school board “disgusting” for not doing anything about Lemieux. Carlson called Lemieux “a man abusing children in the classroom.”

Bernier was notably the only main federally active political figure in Canada to immediately denounce the teachers’ dress, and on Sunday blasted the school board for saying they could not do anything about the teacher.

“You cannot do any discrimination against the gender fluidity. So that’s why that’s why it is telling us I cannot do anything about that. Yes, you can. Yes, we can, that’s why we are here. We are asking for common sense to prevail, that must be the end of that wokeism all across the country.”

On Friday, Ontario’s Education Minister Stephen Lecce was asked about the Oakville teacher. He said that he has asked the Ontario College of Teachers to review its professional conduct provisions.

“In this province, in our schools, we celebrate our differences and we also believe that there must be the highest standards of professionalism in front of our kids,” said Lecce.

“And on that basis, I’ve asked the Ontario College of Teachers to review and to consider strengthening those provisions with respect to professional conduct which we think would be in the interest of all kids in Ontario.”

At the Sunday rally, Bernier also took a shot at what he called “establishment elected politicians” for staying silent regarding the Oakville teacher, saying “they are nowhere to be seen.”

“Today, it’s not popular speaking against wokeism, and all these establishment politicians, they’re doing politics based on consensus and they are politically correct,” said Bernier.

“Shame on them, shame on them and they will come on outside, when we will win that fight.”

Bernier: Schools should be safe places for kids, free of ‘perverts’

Last Friday, Bernier also took to social media to blast Lemieux as a “pervert” who should not be allowed to be around kids.

“You must have seen pictures of this pervert go viral on the Internet the past few days. This man is a teacher at Oakville, Trafalgar High School in Ontario, where he wears his hypersexualized and grotesque costume every day at school,” said Bernier in a video posted to Twitter.

“School must be a safe place for our kids. It is not the case with that teacher, he is using school to promote is sick sexual fantasies. So we must stop that, and that’s why I’m leading a protest this Sunday.”

On Friday, Bernier said he will “never” use pronouns that were “invented by weirdos,” and will only use “he and she”

“Forget about ‘ze’ ‘xir’ ‘sie’ ‘hir’ ‘ey’ and all the other invented pronouns,” tweeted Bernier.

“Nobody is going to force me to change how I speak to adapt to 25 different types of weirdos. I’m never going to use pronouns other than ‘he’ and ‘she.’”

In a recent blog post, Bernier noted that it is unfair to the students that the teacher “gets off on presenting himself as a highly-sexualized and grotesque caricature of a woman in front of minors.”

“Not only is this an obscene mockery of womanhood, but it also perverts the entire atmosphere at the school. Parents MUST stand against the sexualization of their children’s learning environment!”

Jack Fonseca, Campaign Life Coalition’s director of political operations, warned at the time Bill C-16 would amount to attacks on the family and Christians.

“Mark my words, this law will not be used as some sort of ‘shield’ to defend vulnerable transsexuals, but rather as a weapon with which to bludgeon people of faith and free-thinking Canadians who refuse to deny truth,” he told LifeSiteNews.

Last month, the Trudeau government said it would fund LGBT groups to the tune of $100 million.