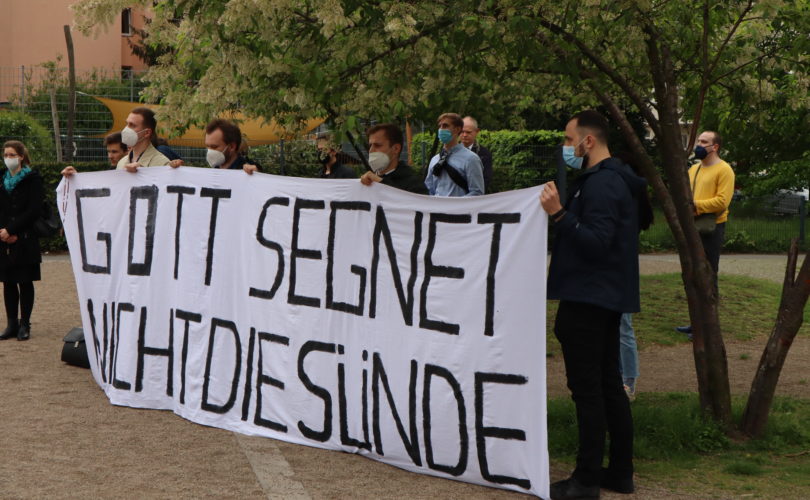 BERLIN, Germany, May 18, 2021 (LifeSiteNews) — Young faithful Catholics gathered in Berlin on May 16 to prayerfully protest against the same-sex blessings being given in Catholic churches in violation of the Vatican’s recent ruling, and reminding worshippers that “God does not bless sin.”

The group of sixteen Catholics, nearly all young, came together from across the Archdiocese of Berlin to pray in front of the Jesuit church of St. Canisius in Berlin, where a “blessing service” was held on Sunday May 16. The service was part of the “Love Wins” initiative, a coordinated series of events where same-sex couples were given blessings by dozens of Catholics priests, in retaliation to the Vatican’s March 15 re-iteration of the Church’s ban on blessings for same-sex couples.

Petitioning for the unity of the Church, the conversion of all those involved in the illicit blessings, and for atonement against this violation of the Church’s teaching, the young Catholics recited a number of prayers, including the rosary, the prayer to St. Michael, the Litany of St. Joseph, and the Marian hymn Salve Regina.

“The times are over when Catholics let everything melt over them without comment. We lay people also have a role to play, as the Church has been emphasizing more and more in recent decades,” commented one of the young men praying.

They held a home-made banner, inscribed with the words “God does not bless sin,” a phrase taken directly from the Congregation for the Doctrine of the Faith’s own document. Standing a few meters away from the entrance to the church, which had its doors open the whole time due to COVID restrictions, the group was able to see and hear the entire event inside the church.

The event itself was Mass, including the distribution of Communion. However, the group described it as “a real abomination,” mentioning that it featured a pseudo-sermon by a woman, “cheesy” songs with harp accompaniment, Communion in the hand, and rose petals strewn at the exit.

In addition to this, the celebrant referred to God as both male and female, “God, who is our loving father and loving mother.” During the sign of peace, the priest allowed “lovers” to embrace and kiss each other.

Outside, the group prayed aloud throughout the Mass, except during the consecration and the distribution of Communion.

The blessing of same-sex couples took place after the homily, as the priest approached each member of the congregation, asked some questions of them, and then extended his hands in blessing. He did this to people who came on their own, or in pairs, and the blessing lasted about 20 minutes.

In comments provided to LifeSiteNews, one member of the group stated that by performing this blessing, “the priests who do so are not fulfilling their mandate to guide the faithful entrusted to them.”

He added that such priests were “misusing the Church as a stage to promote a false understanding of love, thus obscuring the real message of Christ,” which was harmful to everyone in the Church as a whole. “Therefore, we have asked the Mother of God to bring the Psalter we have prayed before the throne of her Son as an atonement for the offense, and as a plea for the conversion of the participants.”

The reaction to the group of faithful Catholics included some looks of curiosity and disinterest, but only a few people approached the group to engage in conversation.

Another of the group mentioned how such a protest was vital: “When the teachings of the Church are so openly violated, we young Catholics in particular must not stand idly by, but bear witness for Christ the King. It was an uplifting and encouraging experience for me to publicly stand up for the truth with other Catholics.”

The protest itself had been planned for several days, and was pre-empted the week before on a smaller scale, when two other parishes in Berlin also had blessings for same-sex couples. At these events, the Catholics protesting outside the churches were fewer in number due to the impromptu nature of the protest, but were able to hold signs reading “God does not bless sin” and “Roma locuta, causa finita,” that is, “Rome has spoken, the case is closed.”

However, no matter the size of the group, one of those protesting on May 16 stated that the demonstration was still important. “I showed up at the protest because even though I knew it would be just a few of us and that the majority of Catholics wouldn’t do anything to stop the horrendous event, I wanted resistance to be present,” she said.

“When I read about these kinds of sacrilegious events online, I always think to myself: Is there not a single Catholic there opposing this act? And I feel hopeless. With my presence I want people to know that not all Catholics are indifferent, and that some of us will continue to defend our Church.”

This faithful opposition to clerics defying the teaching of the Catholic Church is not the first such protest, as days before, young Catholics in Vienna, Austria, did likewise. Responding to Vienna’s oldest Catholic church flying the rainbow flag from its bell tower, the Christus Vincit group made a banner in response.

Bearing the inscriptions “God does not bless sin” and “Roma locuta, causa finita,” the group fixed it to the church at night, in order to “echo the voice of the Church.”

The group criticized Vienna Cardinal Christoph Schönborn’s opposition to the ban on blessings, saying the cardinal showed more concern for the “feelings” of people with same-sex attraction than for their eternal salvation.

In an interview with LifeSiteNews, the group, all aged around 24, explained that they wished “to remind some Catholic officials what the unchangeable teaching of the Catholic Church is.” Christus Vincit noted that contrary to the arguments that approval of same-sex blessings is an act of love, such statements “are not only harmful to the Church but also — and this is very important to us — to people with a homosexual orientation who are misled by them.”