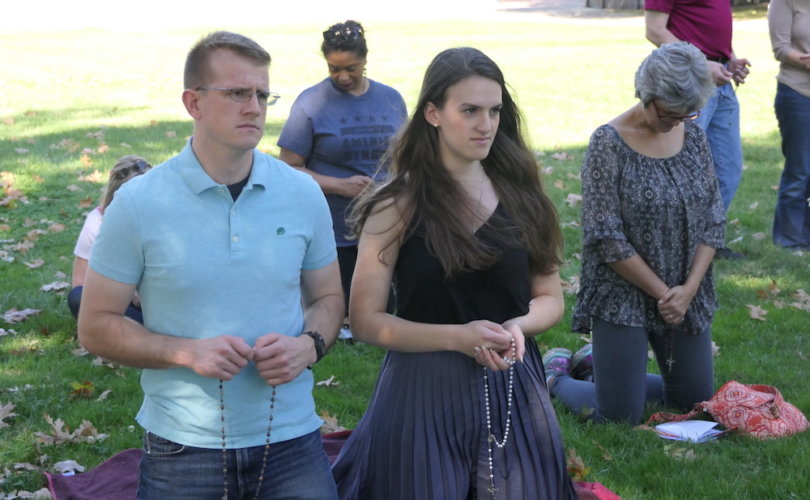 WASHINGTON, D.C., October 9, 2017 (LifeSiteNews) – Around 250 people spread out across Upper Senate Park on Saturday to pray for life, marriage, and religious freedom in the United States.

The crowd prayed all four mysteries of the rosary, consecrated themselves to the Blessed Virgin Mary, and prayed for America to embrace “holiness.”

The final rosary prayed was the last one of the second annual 54-day rosary novena for America leading up to this rally. Catholic evangelist Doug Barry led that rosary and encouraged the crowd to follow the messages of approved apparitions of Our Lady and be spiritually prepared for whatever may come.

“We all realize how far from true north the conscience of our country has gone,” John Hinterlong of Burbank, California, told LifeSiteNews. He traveled with seven others across the country to attend the rally.

America won’t be “steered back by screaming and yelling and being violent,” he said. “Our country needs prayers. And we need to come together as (the) people of a nation who love our country and love God … only then will our nation heal.”

Hinterlong said he prayed the rosary novena last year and realized how powerful it was.

According to the rally’s organizers, more than 44,000 people participated in the novena and received daily emails reminding them to pray.

Sister slams 'nuns on the bus': 'we need nuns on their knees, in their chapels'

The rally, which took place on the Feast Day of Our Lady of the Rosary, finished with a particularly rousing speech from Sister Mary Brigid Callan, director of development for the Diocese of Steubenville, Ohio. Callan then led the crowd in St. Maximilian Kolbe’s prayer of consecration to Our Lady.

Callan said saints and heroes are needed now more than ever given the state of the Church.

“Our shepherds often seem more lost than us sheep, and so many religious are hardly (examples) to follow,” she said.

Callan also took aim at bishops who care more about money than the salvation of souls.

“We don’t need bishops benefiting from bulging bank accounts: we need bishops who boast only in the cross of Christ!” she said.

“St. Maximilian Kolbe knew what we needed — real Catholics,” said Callan. She read a quote from the martyred saint:

“Be a Catholic: When you kneel before an altar, do it in such a way that others may be able to recognize that you know before whom you kneel.”

Father Frank Pavone, national director of Priests for Life, led the crowd in praying the Joyful Mysteries “for a ‘yes’ to life from conception to natural death.”

“We at Priests for Life work every single day with the disciples of Jesus Christ who serve in that building,” said Pavone, pointing to the U.S. Capitol.

“The laws that are passed here … if they are just, we must follow (them),” said Pavone. “But those laws and those lawmakers must also follow the law which is above them, which is above us, which our founding fathers made clear is higher than any human law: the law of God Himself.”

Monsignor Charles Pope led the sorrowful mysteries “for religious freedom and an end to religious persecution.”

Jim and Joy Pinto, EWTN co-hosts, led the crowd in the luminous mysteries “for families, supernatural grace, and the sacraments.”

“My life is not my own,” Joy Pinto explained. “I’ve been bought with a great price, and to Jesus alone do I belong.”

She laughed, “And you know, when you get married, you give up half your life. When you have children, you give up the other half of your life. And you’re left with no life. But that’s the point – that you have no life, that you are marked as Christ’s own, and you make a difference.”

Pinto said prayer is essential for the graces needed to get through everyday life and fight the culture of death.

“We need Jesus,” she said. “We need our Blessed Mother praying for us. I don’t want to wake up and just be a good wife. I wanna be the best wife!”

“The devil is at your door like a roaring lion,” Pinto continued. “And he’s seeking to destroy your marriage. He wants to destroy life and babies in the womb. And then he comes after your family. We are in a battle and I say draw your sword, that you would be ready, that you would do this until your dying breath.”

The rosary rally took place the same day hundreds thousands of Catholics formed a human chain along Poland’s border, praying the rosary to “save Poland and the whole world.”

It also took place while evangelicals gathered on the National Mall for a four-day prayer event called “Awaken the Dawn.” Part of the event was dedicated to praying for an end to abortion, according to its website. Dr. Alevda King, a pro-life activist and the niece of Dr. Martin Luther King Jr., spoke.