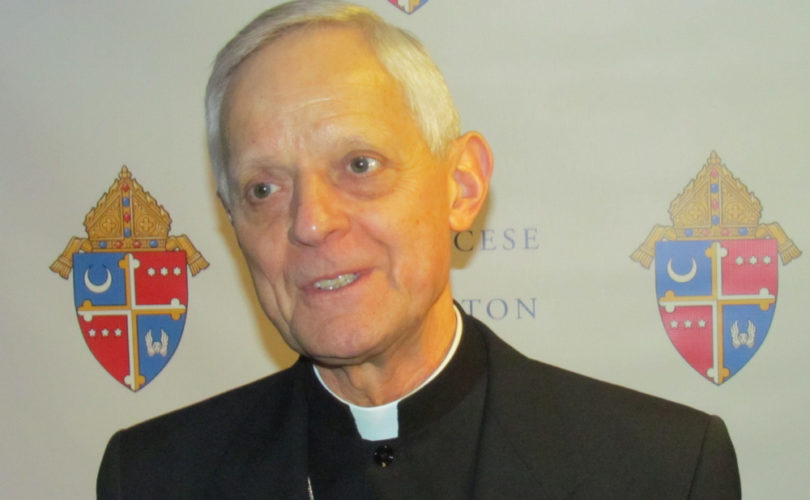 WASHINGTON, D.C., May 29, 2015 (LifeSiteNews.com) — The Catholic faith is deemed intolerable today, while “tolerance” is held up as the supreme civic virtue, Washington, D.C. Cardinal Donald Wuerl said in a new pastoral letter. While prejudice has been all but outlawed, anti-Catholicism gets a pass, he writes.

Focused on Catholic identity and how it’s come to face widespread challenges today, the cardinal’s letter said Christ did not change his message because someone found it hard to accept, and neither can the Church.

“The many challenges Catholics face demonstrate the need to be vigilant,” Cardinal Wuerl stated. “No Christian should be forced to accept a secular view of life with its own vision of morality. No Catholic institution should be denied its freedom simply because it wishes to follow the Catholic faith.”

Released on Pentecost, the 30-plus page text, titled Being Catholic Today: Catholic Identity in an Age of Challenge, touches on what it means to be Catholic, freedom, particularly religious freedom, and the strong animus against Catholics’ beliefs and their right to follow their faith.

“When we come to the institutions of the Church – its parishes, schools, universities, charitable organizations, health care facilities and more – these too must reflect a genuine Catholic identity with visible communion with the Church, both universal and local, and fidelity to Catholic teaching,” Cardinal Wuerl said.

“The Church does not require others to believe or live by her teaching,” he said. “But we do ask for and insist on the freedom to present and publically demonstrate our faith in our Catholic schools and faith based institutions. Those who participate in the ministry of our institutions also share in the obligation to help them achieve their goals and purpose.”

In his pastoral letter, the cardinal measured the damage to Catholic identity and fidelity to Church teaching after the Second Vatican Council, and how it affects challenges to the faith today.

“When I was a young priest in the 1960s and 1970s, there was much experimentation and confusion in the Church. Teachers and clergy were encouraged by some to communicate an experience of God’s love, but to do it without reference to the Creed, the sacraments, or Church tradition,” he stated. “It did not work very well. Catholics grew up with the impression that their heritage was little more than warm, vaguely positive feelings about God.”

Those years left many Catholics spiritually and intellectually weak, unable to withstand the “tsunami of secularism” that came in recent decades, the cardinal said, and many people were lost, the result of failure to teach them about right and wrong.

“This left many no longer able to admit that we are sinners who need Jesus because many no longer know what sin is. This lived experience of people not being fully or correctly presented the truth of the faith illustrates why we are called to the New Evangelization,” Cardinal Wuerl continued. “It also demonstrates why it is so crucial that we reassert and strengthen our Catholic identity, and that our freedom to do so be respected in society and in law.”

Catholic teaching is being labeled with a newly-created definition of “discrimination,” he said, and religious freedom is being violated by laws seeking to restrict Catholics in carrying out Church ministries.

“While people may disagree with us and choose to follow their own moral path, respect for freedom of choice should not require that we set aside our own faith convictions and freedom in order to satisfy every demand of those who have other beliefs,” said Cardinal Wuerl. “The Church has the right to recognition and protection of her true Catholic identity.”

Cardinal Wuerl has faced strong criticism from the pro-life movement in the past on the issue of Catholic identity in the public square. The cardinal is one of the leading proponents of giving Communion to Catholics who publicly promote grave moral evils, such as pro-abortion politicians.

In 2012 Cardinal Wuerl removed one of his priest’s faculties after the priest refused Communion to a lesbian woman who approached him before Mass to inform him that she was living in a homosexual relationship. The archdiocese issued a public apology to the woman, and criticized the priest’s actions.