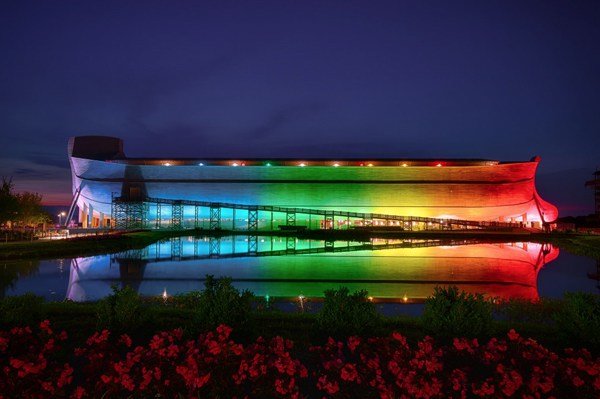 WILLIAMSTOWN, Kentucky, July 25, 2017 (LifeSiteNews) — One of the universal symbols in human history has been hijacked and must be reclaimed, according to the Creation Museum’s Ken Ham.

“As Christians, we need to take the rainbow back and teach our young people its true meaning,” Ham announced on Twitter.

A sister attraction to the Creation Museum is the “Ark Encounter” exhibit, a 510-foot long, 85-foot wide, 51-foot high replica of Noah’s Ark. The huge ship is lit up every night in rainbow colors to remind folks that the rainbow was God’s promise to mankind.

The @ArkEncounter is lit permanently at night with a rainbow to remind the world that God owns the rainbow & is a sign of His covenant pic.twitter.com/U0dmKnXV2v

Ham quotes the Bible to teach that the rainbow conveys God’s commitment and love for mankind thousands of years before it became a symbol of sodomite “pride.”

Not surprisingly, homosexuals have criticized and mocked the Ark’s rainbow lighting.

“This is Ken Ham’s sad attempt to take back the rainbow symbol from the LGBTQ community,” the Orlando Weekly blogged, calling it “bizarre” and a “gay boat.”

Architect John Gidding issued a flurry of angry tweets. “Will you have a gay animal couple in there?! Penguins are overplayed — I say make the dinosaurs you have in there gay! JurasSICK!”

“Sadly, people ignore what God intended the rainbow to represent and proudly wave rainbow-colored flags in defiance of God’s command and design for marriage,” columnist Todd Starnes wrote. “But the rainbow was a symbol of God’s promises before the LGBTQ movement — and will continue to be after that movement has ended.”

Ham explained that the Ark is rainbow-lit to “remind the world that God owns the rainbow.” The idea started last Christmas. In February, Ham announced, “We’ve decided to make the rainbow lights a permanent feature” in the “Ark Encounter” exhibit.

Ham’s organization, Answers in Genesis, has produced a colorful children’s book, “When You See a Rainbow,” to reclaim the original message.

“It is vitally important that children remember the true history of the rainbow as a symbol of God’s promise to Noah and the world after the Great Flood,” an online explanation of the children’s book states.

Ham has been saying this for quite a while. In 2007, he noted that though the rainbow has been hijacked as a symbol of pride in sin, it is actually God’s sign of the judgment of sin and His promise of grace.

The rainbow is a reminder God will never again judge the wickedness of man with a global Flood–next time the world will be judged by fire pic.twitter.com/K568yMnNsP

“We need to take back the rainbow and worship the One who invented the rainbow, and every time we see it be reminded of its true message,” Ham’s blog post explains.