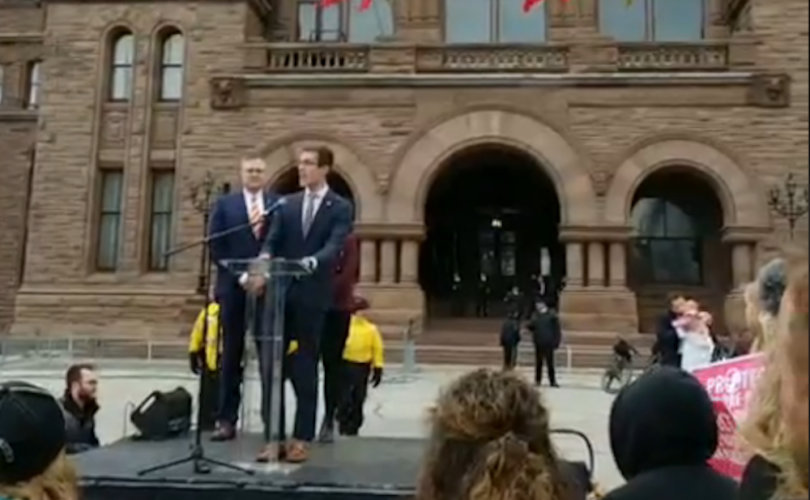 MPP Sam Oosterhoff at the 2019 March for LifeFacebook

TORONTO, Ontario, May 13, 2019 (LifeSiteNews) ― Three Ontario members of provincial parliament risked the wrath of the mainstream media by speaking at the Toronto March for Life.

Will Bouma, MPP for Brantford-Brant; Christina Mitas, MPP for Scarborough Centre; and Sam Oosterhoff, MPP for Niagara West all appeared onstage outside Queen’s Park, the Ontario legislature, to speak to pro-life witnesses gathered for the May 9 Toronto March for Life. All are members of the ruling Progressive Conservative Party of Ontario.

Oosterhoff was the highest profile of the pro-life politicians, having been, at 19, the youngest MPP ever elected in Ontario. Now 21, Oosterhoff gave a stirring speech in front of Queen’s Park, beginning with praise for those attending Toronto’s first March for Life and taking “a stand for the most vulnerable of Canadians.”

“This year marks a sad occasion,” Oosterhoff said. “For 50 years Canadian preborn children have been under attack. The human rights of the littlest citizens of our province and our country have been ignored and their lives taken without their choice.”

“And the consequences have been devastating,” the young MPP continued. “Look around these streets … Over 4 million children are not on the streets of our cities. Millions of Canadians are not working. They’re not raising families. They’re not attending school or participating in communities. Millions of lives lost, and how many more are yet to die?”

“And this is why we march. We march to give a voice to the voiceless, to speak for those who can’t speak for themselves.”

Oosterhoff underscored the need to to help vulnerable abortion-minded women as well as the unborn.

“Support those who are going through difficult situations,” he continued.

“Help those who have an unplanned pregnancy. Offer a helping hand to a young mother who’s looking desperately for options when there only seems to be one. Be pro-life today and every day. Not just May 9, not just at the March for Life, but every day of the calendar, be for life.”

Oosterhoff then remarked on the youthful energy of the contemporary pro-life movement in Canada.

“I can see just looking at this crowd that the momentum is shifting,” he said.

“The pro-life movement is young. It is increasingly energetic, and it is becoming more and more diverse,” he continued.

“This is because for so many of us, especially young people, we are survivors. We have survived 50 years of abortion in Canada, and we pledge to fight to make abortion unthinkable in our lifetime.”

After the spontaneous cheering of the crowd, Oosterhoff added:

“We pledge to open the eyes of the nation to see the lives of the preborn children as equally valuable. And for that, thank you for fighting. And never, ever, ever give up. Life is worth fighting for.”

Afterward, Oosterhoff was mobbed in the halls of Queen’s Park by mainstream journalists eager for a story to discredit the Conservative government of Premier Doug Ford. Oosterhoff did not back away from his strong pro-life stance.

“I’ll always speak for children who are too young to speak for themselves, who have no voice. I’ll always be a voice for the voiceless.”

According to the Toronto Catholic Register, Bouma told the March for Life that “It’s OK to stand for life.”

“We are not anti-abortion; we are pro-life,” he stated.

Mitas, who was pregnant when she ran for office, revealed to the crowds that she had been encouraged to abort her baby as it would interfere with her political career. The little girl, now three months old, was also onstage, and Mitas said she could not imagine life without her.

“When over 100,000 babies are aborted every year, something’s gone terribly wrong,” she said of the national carnage.

Mitas also cited the murder of Arianna Goberdhan, who was nine months’ pregnant with unborn daughter Assara when they were both killed by Goberhan’s estranged husband, Nicholas Baig. Baig was charged with Arianna’s murder but not Assara’s death. The MPP encouraged the crowd to sign the federal petition to pursue (special) charges against people who murder pregnant women.

“There are a lot of (life) issues going on both federally and provincially,” she said. “I urge you to keep yourselves briefed on this and to stand up for these issues.”

After questioning by pro-abortion MPPs and the mainstream press, a spokesman for Ontario’s Progressive Conservative government stated that the abortion issue would not be reopened.

To thank the MPPs for their brave pro-life stance, please contact: