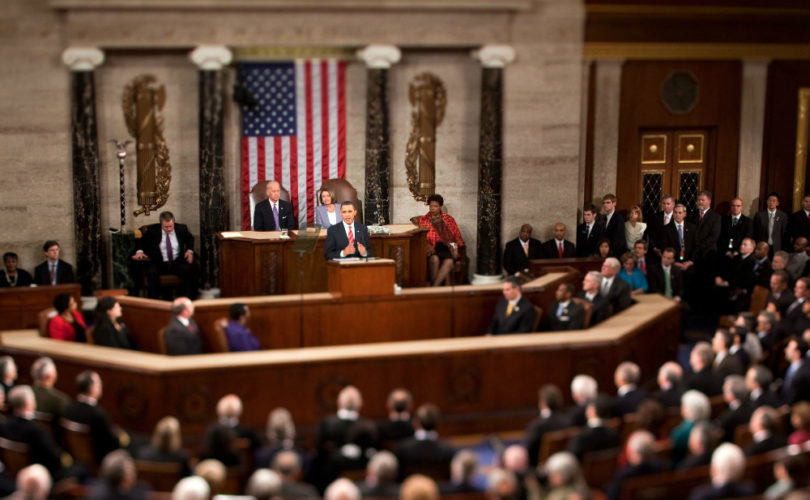 WASHINGTON, D.C. — President Barack Obama affirmed that “as Americans, we respect human dignity” and that “we are a people who value the dignity and worth of every citizen” – before recommitting to “a woman's right to choose” during last night's State of the Union address.

In a speech that stuck primarily to economic themes – including new incentives for women to leave home and enter the workplace – the president took time to assert his support for abortion-on-demand and his international advocacy of homosexual rights.

His sixth speech on the nation's health was the first to address a Congress dominated by the Republican Party, whom he urged to shun “the base” and embrace the most controversial aspects of his health care proposals.

“We still may not agree on a woman’s right to choose,” he said, “but surely we can agree it’s a good thing that teen pregnancies and abortions are nearing all-time lows, and that every woman should have access to the health care she needs” – an apparent reference to the HHS mandate that employers provide employees with “free” birth control, sterilization, and abortion-inducing drugs.

Under the Obama administration, the CDC has consistently promoted the use of abortifacients to further reduce abortion rates, saying that increasing the use of long-acting reversible contraceptives (LARCs) such as “intrauterine devices and hormonal implants” is “an important way to reduce the number of unintended pregnancies and consequently the number of abortions performed in the United States.”

House Speaker John Boehner, who looked laconic during much of the 59-minute address, applauded at the reduction of abortions and continued applauding the allusion to the HHS mandate.

The abortion references riled Family Research Council President Tony Perkins. “While pointing to a decline in the number of abortions, he failed to mention that the taxpayer funding of abortion within ObamaCare, which violates the conscience of millions of Americans, threatens to reverse this decline,” he said.

Rather than curtail abortion-on-demand, which has claimed 56 million American lives since 1973, Obama stated that “no challenge poses a greater threat to future generations than climate change.”

Both of Obama's statements on upholding human dignity referred, instead, to safeguarding Islamic terrorists and sexual minorities. “As Americans, we respect human dignity, even when we’re threatened,” he said, “which is why I’ve prohibited torture, and worked to make sure our use of new technology like drones is properly constrained.” He added that “the vast majority of” the world's Muslims “share our commitment to peace.”

Americans, he said, “condemn the persecution of…people who are lesbian, gay, bisexual, or transgender” around the world.

President Obama and his foreign dignitaries have promoted the normalization of homosexual behavior and the redefinition of marriage as cornerstones of U.S. foreign policy, in the process straining relations with African nations and other traditional societies in the process.

“We do these things not only because they’re right, but because they make us safer,” he said last night.

He said he wanted America's “future generations to know…that we are a people who value the dignity and worth of every citizen – man and woman, young and old, black and white, Latino and Asian, immigrant and Native American, gay and straight.”

President Obama also wants to make it easier for mothers to leave their young children in day care. Saluting “universal childcare,” he highlighted a proposal for universal preschool, as he did in 2014 and 2013. He proposes giving families up to $3,000 a year per child to pay for day care as part of a series of enticements for stay-at-home mothers to join the workforce. “It’s time we stop treating childcare as a side issue, or a women’s issue, and treat it like the national economic priority that it is for all of us,” he said.

NARAL Pro-Choice America thanked the president for the proposal:

Defying calls for triangulation or moderation, Obama instead cautioned Congress against “always looking over your shoulder at how the [Republican Party's conservative] base will react to every decision” and “refighting past battles on immigration.”

In an address that began five minutes late, Obama proposed “free community college,” encouraged the increased use of electronic medical records, determined to get tougher with Russian President Vladimir Putin over his foreign policy toward Ukraine, and quoted Pope Francis' general support for diplomacy in the context of Obama's hope to normalize relations with Communist Cuba. He once again promised to close the terrorist detention facility at Guantanamo Bay.

In addition to the official Republican response from Iowa Sen. Joni Ernst, Sens. Rand Paul and Ted Cruz and Congressman Louis Gohmert offered their rebuttals, and a host of officials offered their own reactions.

House Speaker Boehner derided the speech as a series of “veto threats and unserious proposals” that amount to no more than “good political theater.”

RNC Chairman Reince Priebus said instead of greater economic regimentation, “we should let families and states make decisions that are right for them.”

Sen. Jeff Sessions, R-AL, said, “Tonight President Obama stayed the course of tax, spend, borrow, regulate, and add to the debt. This policy has hammered working families, whose average inflation-adjusted income has fallen a stunning $4,200 since 2009.”