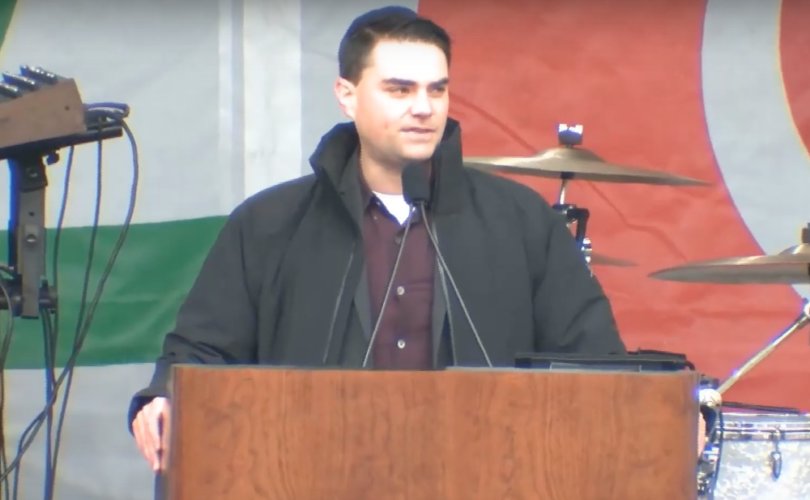 WASHINGTON, D.C., January 18, 2019 (LifeSiteNews) – In addition to podcasting live from the 2019 March for Life, conservative commentator Ben Shapiro also delivered the first speech of the rally Friday to formally kick off the annual pro-life event.

“America was founded on the promise of God-given rights, chief among them the rights to life and liberty,” Shapiro said. But while once America's children were her most prized group,” then something happened. We decided to erase them […] we lied to ourselves, and then we built walls around that lie.”

“We pretended these were not human lives at all, but disposable balls of meat,” he continued, after detailing multiple scientific truths of fetal development denied by the abortion lobby. “We told ourselves we were virtuous for our lie. We reversed good and evil.”

“Maybe they're right. Maybe we today here are not in line with the rest of society,” Shapiro said. “To which I say, good. So were the abolitionists. So were the civil rights marchers. So were the martyrs in Rome and the Jews in Egypt. Righteousness doesn't have to be popular; it just has to be righteous.”

The conservative commentator then assured the crowd that, despite the mainstream media's best efforts, their stand for life would not be forgotten.

And most of all, God. The God who built and preserves nations, who brings life and maintains it, who stands with those who suffer most at the hands of evil. He will remember us too. He will remember America and he will bless her. God will bless us, because we are the guardians of His most precious creations. We stand between America and the darkness, and we will march until that darkness is banished forever, and all of our children can stand together in the sunlight.

Shapiro's remarks follow an hour-long live podcast of his popular show earlier in the day, from the March for Life stage. During that podcast, he took the time to address a litany of common pro-abortion arguments, interviewed Vice President Mike Pence, and predicted that the pro-life movement would ultimately prevail.

LifeSiteNews will be covering the 2019 March for Life throughout the day. Readers can find a full list of events by clicking here and watch the March live by clicking here.