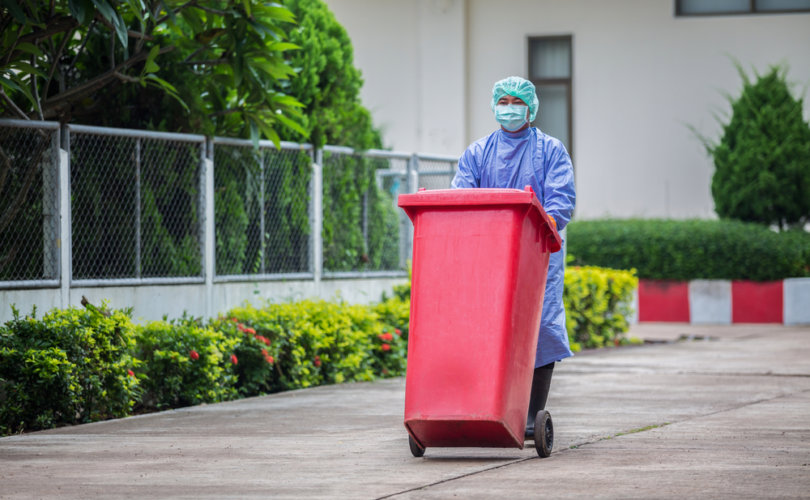 COLUMBUS, Ohio, August 28, 2018 (LifeSiteNews) – The pro-life group Created Equal is launching a new series of videos Wednesday exposing the grisly reality of abortion from a unique perspective: firsthand accounts from the truck drivers responsible for picking up babies’ remains from abortion facilities.

The first of three upcoming videos “exposing the dirty deeds of the abortion industry” presents audio from a former Stericycle driver who took fetal remains from an unspecified abortion center “at least twice a week” from October 2016 to June 2017. Stericycle is a medical waste disposal company that helped dispose of fetal remains for Planned Parenthood, and claimed in 2017 to have stopped accepting any aborted babies.

The driver describes how the staff would send someone to meet him at a nearby gas station when pro-life protesters were in front of the building. “I didn’t feel good myself doing it because it’s wide open in the public,” he says. The video shows nondescript plastic bins, cans, and cardboard boxes being loaded into the back of a truck.

The man explains that between disliking “a lot of things they was doing” and the fact that his employer “wasn’t honest with me from the beginning,” he was eventually driven to quit his job. That was apparently a common experience, because he estimates he was “about the seventh guy in two years” who did the same.

“Every time I rolled by that place, I got a chill on the inside, so I just, I didn’t want to deal with them no more,” the ex-driver said.

As he describes accompanying nurses who he watched pull fetal remains out of freezers and then pack them in red bags and taped boxes, the video shows the freezer of a standard refrigerator filled with objects in red and blue plastic bags. On one shelf, the “waste” is sitting right next to a Minute Maid juice container.

“And it smells, so what’s frozen in blood, and you can see it, and it makes you want to puke?” he asks. At this point, the screen transitions to bloody, close-up images of aborted babies’ hands, legs, faces, and more. “And you turn your head because you don’t want to see her stick it in the box and take it up.

“So what else are you all pulling out? It’s a woman’s clinic. A baby,” he said.

The driver explains that aborted babies marked for incineration are sent to a “big oven they had up in their facility” to be disposed of, a part of the process he “dreaded.”

The video is part of Created Equal’s Project Weak Link, which was launched in 2016 on the premise that the abortion industry cannot function without medical waste companies helping them dispose of large number of children’s bodies they accumulate.

“We are all one incinerator away, or one incineration company away, from being closed,” Michigan abortion chain owner Renee Chelian said at a 2014 National Abortion Federation conference. “I had five months’ worth of fetal tissue in my freezers” before Stericycle came along.

Citing testimony from former drivers and a wealth of footage captured by eyewitnesses, Created Equal alleges that Stericycle continues to collect dead babies from abortionists despite their public denials.

“Unless Stericycle refuses to enable abortion facilities in collecting, transporting, and disposing of fetal remains, as well as the instruments used to kill them and other waste, we will never stop exposing them to the public,” Created Equal president Mark Harrington declared. “Stericycle needs to dump the abortion cartel altogether by cancelling all contracts with abortion clinics or face continued public exposure and bad publicity.”

Created Equal urges pro-lifers to call Stericycle CEO Charles Alutto at (847) 607-2004 to demand that he “stop lying about his company’s involvement in the abortion holocaust,” and “stop enabling abortion by transporting and disposing of aborted babies and the instruments used to kill them.” Complete contact information for Stericycle’s various departments can be found here.