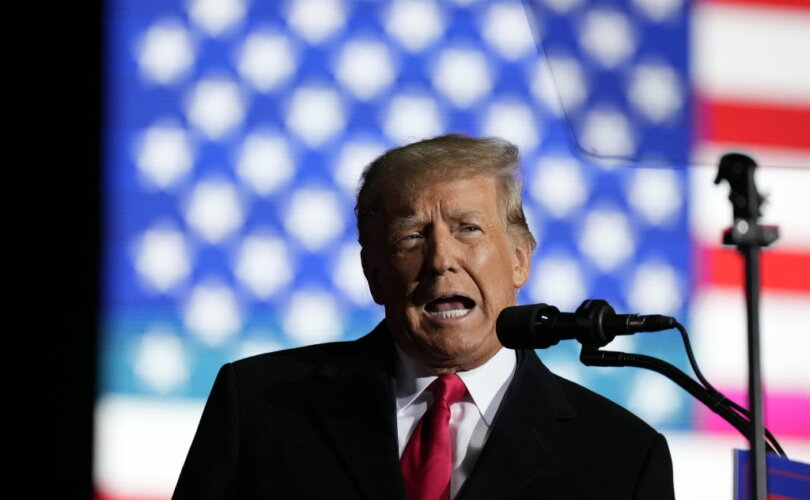 Former U.S. President Donald Trump speaks during a rally at the Dayton International Airport on November 7, 2022, in Vandalia, OhioPhoto by Drew Angerer/Getty Images

VANDALIA, Ohio (LifeSiteNews) — On the eve of the 2022 midterm elections, former President Donald Trump announced Monday that he would be making a “very big announcement” on November 15, widely believed to be his bid to run in a 2024 presidential campaign.

Speaking to supporters at a rally in Vandalia, Ohio, on Monday night, Trump thwarted speculation that he was about to announce a 2024 presidential campaign that evening. Instead, he revealed he would be making a “very big announcement” next Tuesday.

But not to detract from tomorrow’s very important, even critical election, and I would say, in the strongest way, it’s a country-saving election…

I’m going to be making a very big announcement on Tuesday, November 15, at Mar-a-Lago in Palm Beach, Florida.

“We will fight for America like no one has ever, ever fought before,” he stated, naming the GOP candidates he has endorsed in the current midterm elections.

In characteristic style, Trump urged those at the rally to remain “loyal” to “America.” “As long as we are confident, united, and loyal to the cause, the tyrants we are fighting do not stand a chance because we are Americans and Americans yield to God, and to God alone,” he said.

Americans head to the polls today in the midterm elections in what is widely expected to produce a “red wave” for the Republicans, amid soaring inflation and a widespread cost-of-living crisis. The elections are deemed pivotal, with Democrats looking to implement a number of anti-life and anti-family policies, should they flip two Senate seats and keep their narrow majority in the House.

As LifeSiteNews reporter Raymond Wolfe wrote: “Democrat victories on Tuesday could destroy America as we know it, allowing Democrats to legalize abortion up to birth, outlaw dissent from the LGBT agenda, institutionalize election fraud, and abolish religious freedom for millions of Americans.”

Trump’s announcement came just days after Axios reported that he was likely to announce his 2024 bid on November 14, six days after the midterms. The Axios reporter who broke that story then tweeted that his sources were indicating Republicans of “varying degrees of closeness to Trump are anticipating [an] accelerated announcement based on his recent private comments.”

Based calls/texts all morning, Trump/Vance rally in Ohio will be v closely watched by Rs. Speculation has reached a point of absurdity at this point but many Rs of varying degrees of closeness to Trump are anticipating accelerated announcement based on his recent private comments

Trump also confused observers last week when he made a public swipe at Florida Gov. Ron DeSantis, styling the governor as “Ron DeSanctimonious.” DeSantis is comfortably ahead of his midterm, Democrat challenger Charlie Crist for the state’s governorship.

While also widely tipped to make a 2024 presidential bid himself, during a debate with Crist last month DeSantis refused to say if he was going to run for president in 2024.

While Trump’s accomplishments for the pro-life cause are numerous, the former president is also not without significant political baggage.

Trump-appointed Supreme Court Justices Neil Gorsuch, Brett Kavanaugh, and Amy Coney Barrett all voted to strike down Roe v. Wade in Dobbs v. Jackson Women’s Health Organization, ruling that there is no constitutional “right” to abortion and that states may pass their own pro-life laws.

Trump also withdrew the U.S. from the globalist Paris Climate Agreement and at the beginning of the global coronavirus outbreak, in April 2020, withdrew American funding from the pro-abortion World Health Organization, a United Nations entity that is heavily tied to communist China.

On Trump’s watch, though, the U.S. endured devastating lockdowns to “slow the spread” of COVID-19 – lockdowns overseen and orchestrated by government bureaucrats like Anthony Fauci and Deborah Birx who were essentially unpunished by Trump.

The extreme turmoil of 2020 – forced-masking of toddlers, economic ruin thanks to closure of “nonessential” businesses, devastating learning loss from school closures, riots, inhumane hospital policies that forced people to die alone and banned fathers from being in the delivery room as their children were born – occurred under Trump’s watch, as did “Operation Warp Speed,” which accelerated the development of mRNA injections that in 2021 were then forced upon many Americans as a condition of employment or societal participation.