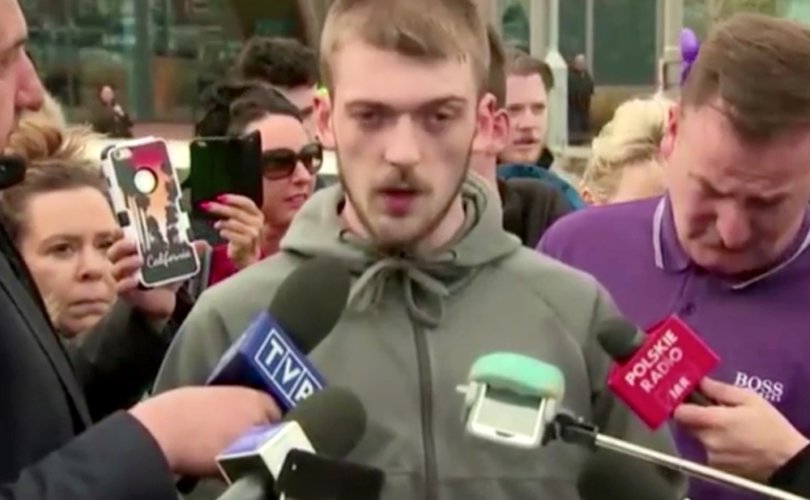 LIVERPOOL, June 18, 2018 (LifeSiteNews) — The father of late toddler Alfie Evans has broken his silence to say that the full story of his death will be exposed soon.

Tom Evans posted a message on Facebook to tell supporters that he and Alfie’s mother will be informing the world of what transpired in the five days between Alfie’s ventilator being torn from his lungs and the boy’s death.

“It’s been 1 month and 2 weeks since our gladiator was [taken] away from us, deprived, neglected, mistreated and respected!” Evans wrote on June 16.

Evans stressed that Alfie’s doctors at Alder Hey hospital, who in 2017 began a protracted court battle for permission to end the child’s life, were proven wrong by the child’s resilience once he was removed from life support.

“I would like to remind the world [that] those [doctors] told me and Kate and all the courts [that] Alfie wouldn’t last longer than five minutes!” he wrote.

“He survived a further five days and fought hard. He should have been [given] respect, care, decency.”

Evans referred to a recent disclosure, thanks to a freedom of information inquiry, that Alder Hey Children’s NHS Foundation Trust had paid over £145,000 in legal bills in its quest to bring the child’s life to an end. He described the hospital’s actions as murder.

“They paid £143k on murdering my son and taking our lives away from us,” he wrote. “We are not done! We are angry, upset, distraught, and truly heartbroken.”

Sarah Evans, Alfie’s aunt, had broken the news of the tax-paid legal bill on June 15.

“Over £145 to kill my nephew?!” she wrote. “We had a hospital. We had the money to take him elsewhere. We had the plane ready. We had Alfie fighting, and they paid this to kill him? Ask yourselves why.”

She expressed her disgust over the conditions under which Alfie’s close-knit, working-class Liverpool family had to visit him and their inability to save him from the state.

“We had no chance of saving our warrior Alfie when we had 60 plus police officers guarding that hospital,” she stated over Facebook. “We the family got our bags checked when we went to visit Alfie, as well as being escorted by police down the corridor to see him…A nurse had sit outside to watch us like we were criminals, as well as 3-4 police outside Alfie’s room, 3 outside the ward and 2 at the end of the corridor, as well as all the exits.”

Sarah Evans, too, hinted that the full story of Alfie’s death at the hands of the hospital will be disclosed.

“They [did] wrong, and the truth will be out soon,” she declared.

Alfie had “meant the world” to his parents, Tom Evans said in his recent Facebook message, and they hoped to make “more memories” with him in heaven.

“Me and Kate will never come to terms with it and will never accept Alfie’s death or cause of death,” he wrote. “But there is one thing that keeps us going and that’s our belief and faith that we will meet our angel again in the future, so we cherish the times we have had with him and look forward to the future to making more memories with him.”

They refused to give permission, and argued that Alfie’s difficulty in breathing on his own was due to an overdose of sedatives.  Undeterred, the hospital went to court to argue that ending treatment was in the child’s best interests. On February 20, 2018, Mr Justice Heydon of the UK Supreme Court ruled that it was in Alfie’s “best interests” to discontinue treatment, to be removed from his life support, and to receive palliative care at Alder Hey.

Alfie’s parents appealed the decision before the UK Court of Appeal and the UK Supreme Court before pleading their case to the European Court of Human Rights this March. The ECHR ruled that their appeal to take their son elsewhere in the European Union was “inadmissible” and that the child’s rights under the European Convention on Human Rights were not being violated. The court also refused to block Heydon’s decision that Alfie’s doctors could remove the boy’s life support.

On Friday, April 20, the UK High Court denied Alfie’s parents’ final appeal that they be allowed to continue caring for their son and ordered Alder Hey remove his life support on April 23. The child died on April 28 at 2:30 A.M.