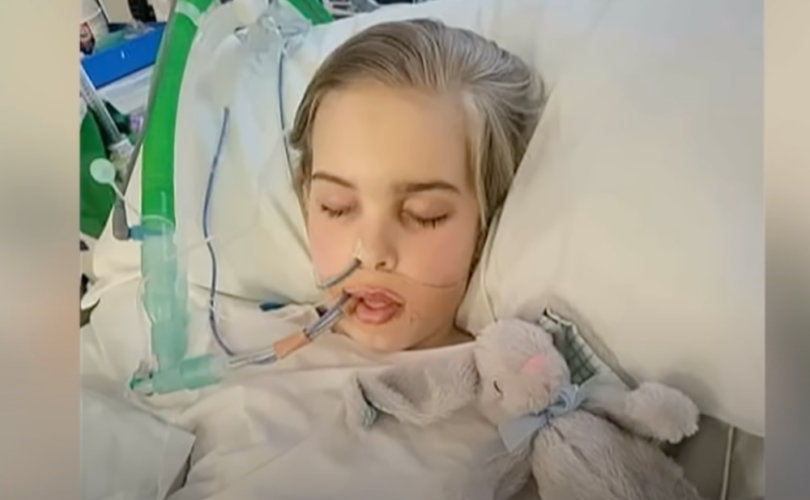 (Christian Concern) – On Monday at the Royal Courts of Justice in the U.K., Mrs Justice Arbuthnot gave permission for a London hospital to remove the life-support for 12-year-old, Archie Battersbee.

Handing down judgment in the Family Division of the High Court, Mrs Justice Arbuthnot, ruled that “on the balance of probabilities” Archie had died. On that basis, she authorised:

“The steps I have set out above are lawful,” the Judge added.

This is believed to be the first time that someone has been declared “likely” to be dead based on an MRI test.

Supported by the Christian Legal Centre, Archie’s parents, Hollie Dance, 46 and father, Paul Battersbee, from Southend-On-Sea, have been fighting a High Court legal battle since their son was found unconscious with a ligature around his neck in what is believed to be a tragic accident in April.

They had asked hospital bosses and the courts for Archie to be given more time and for him to have more medical tests to assess whether his condition improves before making the decision about withdrawing his life support.

Doctors, however, have insisted they believe it is “highly likely” that he is already “brain dead” and asked the Family Division of the High Court to assess the situation and rule that it is in Archie’s “best interests” to die by removing life support.

When asked whether there was sufficient evidence for a reliable diagnosis of death in Archie’s case, Professor Shewmon replied “absolutely not.”

In submissions heard at the High Court last week, Bruno Quintavalle, acting on behalf of Archie’s parents, said the circumstance of this case have never come before an English court.

“That the court should declare, in the absence of any certainty, that death has occurred is an extremely serious issue,” he said

“If he is declared dead but actually isn’t dead, the consequences couldn’t be more grave,” Mr Quintavalle warned. “If someone is alive when organs are harvested (for donation), then that act of removing a beating heart will kill them.”

Mr. Quintavalle argued that for the court to give a declaration of death, in the absence of a brain stem test confirming such, would mean expanding the legal definition of death and be a “trespass on Parliament’s authority.”

He urged the court to adopt the criminal standard of proof: beyond reasonable doubt.

Following the judgment, Archie’s mother, Hollie Dance, said she was “devastated and extremely disappointed by the judge’s ruling after weeks of fighting a legal battle when I wanted to be at my little boy’s bedside.”

The medical expert opinion presented in Court was clear in that the whole concept of ‘brain death’ is now discredited, and in any event, Archie cannot be reliably diagnosed as brain-dead. I feel sickened that the hospital and the Judge have failed to take the wishes of the family into consideration.

I do not believe Archie has been given enough time. From the beginning I have always thought ‘why the rush?’ His heart is still beating, he has gripped my hand, and as his mother, I know he is still in there. Until it’s God’s way I won’t accept he should go. I know of miracles when people have come back from being brain dead.

“This case raises the significant moral, legal and medical questions as to when a person is dead. What does this ruling today tell us about where our society is at?,” asked Dance.

“We intend to appeal and will not give up on Archie,” she said.

Andrea Williams, chief executive of the Christian Legal Centre, who are supporting the family’s legal case, called the ruling a “devastating moment for Archie and his family.”

“The idea that death can be declared on the balance of probability is frankly ludicrous. Life is the most precious gift that we have. This ruling sets a troubling and dark precedent,” warned Williams.

“This case has raised significant moral, legal and medical questions as to when a person is dead. Archie’s parents do not accept that he is dead and are fighting courageously for his life.

“They will not give up now and intend to appeal. We will continue to stand with the family and continue to pray for a miracle.”

Since Archie went into hospital, his sister Lauren has started an Instagram page where people can follow Archie’s journey.

A keen boxer and gymnast, Archie has received videos of support from Celebrity boxers like David Haye and Ricky Hatton and Gold medallist in gymnastics Max Whitlock.

Over 70,000 people have signed a petition calling for Archie to be given more time.

A Gofundme for Archie has also raised over £20,000 so far in donations, which the family say could be used to fund Archie receiving treatment abroad.