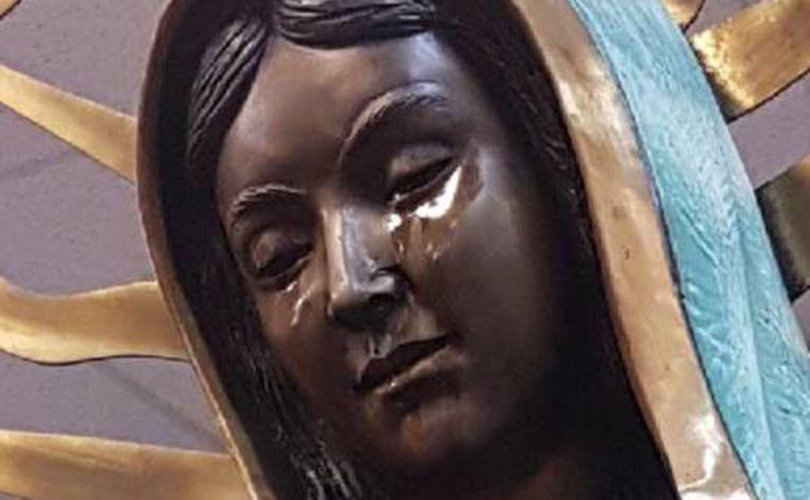 Weeping statue of the Blessed Virgin Mary in New MexicoFacebook

HOBBS, New Mexico, September 12, 2018 (LifeSiteNews) — The New Mexico diocese investigating a “weeping” statue of the Blessed Virgin Mary says it can find no natural cause for the phenomenon.

The “longer process” now is to discern whether the phenomenon is “from God or from the Evil One,” Bishop Oscar Cantú of the Las Cruces diocese said in an August statement.

“The devil can sometimes imitate holy things in order to confuse us. So we must be prudent and vigilant.”

Parishioners at Our Lady of Guadalupe Church first reported the bronze statue of their parish’s namesake weeping rose-scented tears on the feast of Pentecost in May.

Since then, local media reported “thousands” of people have flocked to the mid-sized city on the state’s eastern border to venerate the statue.

Bishop Cantú initiated an investigation, sending diocesan chancellor Fr. Enrique Lopez and vice chancellor Deacon Jim Winder to Hobbs to examine the statue, which had been made in Mexico and been in the parish a year.

“So far, we have not discerned natural causes for the statue’s emitting of liquid,” the bishop wrote.

The investigators collected samples of the fluid, which witnesses said had formed “a puddle” on the floor below the statue. They also reported that “more tears appeared” when they wiped the statue’s face.

“This would be quite similar, chemically, to the Sacred Chrism” — olive oil that is mixed with the perfume balsam when it is consecrated, he explained.

The investigators discovered only cobwebs in the statue’s hollow interior and nothing “that could create liquid.”

They interviewed eyewitnesses and the statue’s makers, who testified it was cast in bronze from a wax mould, which “completely melts away,” leaving “no possibility of wax remaining in the bronze statue as it cools and dries.”

Cantú pointed out that the Church must exercise caution before making a definitive pronouncement.

“If the cause of the phenomenon is supernatural, we must discern if it is from God or from the devil,” the bishop said.

“I remind you that the Church believes in the existence of fallen angels, who at times try to trick us. We renounce the devil, however.”

He said looking at “the fruits of the phenomenon” is essential for proper discernment.

“Thus, the investigation is not yet complete so as to make a definitive pronouncement. The Holy Spirit and the Church will guide us in that respect.”

He also noted the distinction between public and private revelation.

Catholics are “obliged to hold to the teachings of public revelation,” which includes scripture and tradition and ended with the death of the last Apostle.

But they are not obliged believe in private revelation, such as apparitions, which “only reaffirm and highlight what Christ has already revealed in Scripture and Tradition.”

Cantú has been appointed auxiliary bishop of San Jose, California, but wrote that he hopes to visit and celebrate Mass at the parish before he leaves for his new post at the end of September.

A new bishop has not yet been appointed for Las Cruces diocese, which is in southern New Mexico and formed in 1982.

Here is the full text of his letter, which is published in the September/October edition of the diocesan newsletter Agua Viva:

As a prelude to this report, I wish to say a word about revelation from God. The Catholic Church recognizes an important difference between public revelation and private revelation. Public revelation includes Scripture and Tradition. As Catholics, these two are the bedrock of our faith, and it is the Magisterium (bishops in union with the pope) that is the authentic interpreter of revelation. Private revelations include apparitions and messages of Mary, the saints, or of Jesus himself that have occurred after the death of the last apostle. With the death of the last Apostle public revelation ceased. While Catholics are obliged to hold to the teachings of the public revelation, we are not morally obligated to believe private revelations. No new information regarding our salvation is to be gained from private revelations. The messages of private revelations only reaffirm and highlight what Christ has already revealed in Scripture and Tradition. Thus, Mary and the saints always lead us back to Jesus and to the Church. This is why Mary instructed St. Juan Diego, “go to the bishop,” and “build a temple.” While miracles have occurred in the history of the Church, they always lead us back to the fundamentals of our faith: the Church, the sacraments, prayer, and confession.

While the investigation of the phenomenon at Our Lady of Guadalupe Parish in Hobbs, NM, regarding the statue of Mary, is not yet complete, I wish to offer a progress report.

On Sunday the Solemnity of Pentecost, the statue of Our Lady of Guadalupe appeared to be crying. Parishioners observed liquid emitting from the eyes of bronze statue. The liquid was reported to have emitted three times: on Sunday, the Solemnity of Pentecost; on Monday (the next day), the Feast of Mary, Mother of the Church; and on Saturday, the Feast of the Immaculate Heart of Mary.

Fr. Jose Segura, the pastor of Our Lady of Guadalupe Parish, called me immediately to report what he and parishioners were observing. He sent me video of the occurrences.  I subsequently asked our chancellor, Fr. Enrique Lopez, and vice chancellor, Deacon Jim Winder, to initiate an investigation. They traveled to Hobbs, physically examined the statue, collected samples of the liquid emitted from the statue, and began to gather verbal and written testimony from eyewitnesses. The company that fabricated the statue was interviewed.

The statue is made of bronze. As the hollow interior was examined, nothing was found on the interior that could have created liquid. There were cobwebs in the hollow interior. In interviewing the owners of the Mexican company that produced the statue, they informed us that the process of creating the statue involves a wax mold, upon which the liquid bronze is poured. In that process, the temperatures are so high that the wax completely melts away. Thus, they assured us, there remains no possibility of wax remaining in the bronze statue as it cools and dries.

The liquid samples collected from the statue were sent to a lab for chemical analysis. Two distinct methods of analysis indicate the same outcome: the liquid is olive oil with a scented mixture. This would be quite similar, chemically, to the Sacred Chrism. The three oils blessed each year for use in our sacraments and sacred rituals are all olive oil. The one oil which is consecrated, the Sacred Chrism, is mixed with balsam, a scented perfume as it is consecrated.

The first phase of the investigation is to determine if the phenomenon can be explained by natural causes. So far, we have not discerned natural causes for the statue’s emitting of liquid.

If the cause of the phenomenon is supernatural, we must discern if it is from God or from the devil. I remind you that the Church believes in the existence of fallen angels, who at times try to trick us. We renounce the devil, however. When we renew our baptismal promises during the Easter Season, we are asked three questions: “Do you renounce Satan? And all his works? And all his empty show?”  We respond, “I do,” to each of the three questions.

The discernment of whether it is a phenomenon from God or from the Evil One is a longer process. The devil can sometimes imitate holy things in order to confuse us. So, we must be prudent and vigilant. This discernment takes much longer, as we must look at the fruits of the phenomenon. The fruits of the Holy Spirit are mentioned by St. Paul: charity, joy, peace, kindness, goodness, generosity, gentleness, faithfulness, modesty, self-control, and chastity (Gal. 5:22-23).

Thus, the investigation is not yet complete so as to make a definitive pronouncement. The Holy Spirit and the Church will guide us in that respect.

I wish to thank Fr. Segura, the parish staff, and the parishioners of Our Lady of Guadalupe for their prayerful disposition and hospitality to visitors in the face of such an unexpected occurrence. I will plan a visit to the parish before I leave for San Jose, so as to pray and celebrate the Eucharist with the parish community.