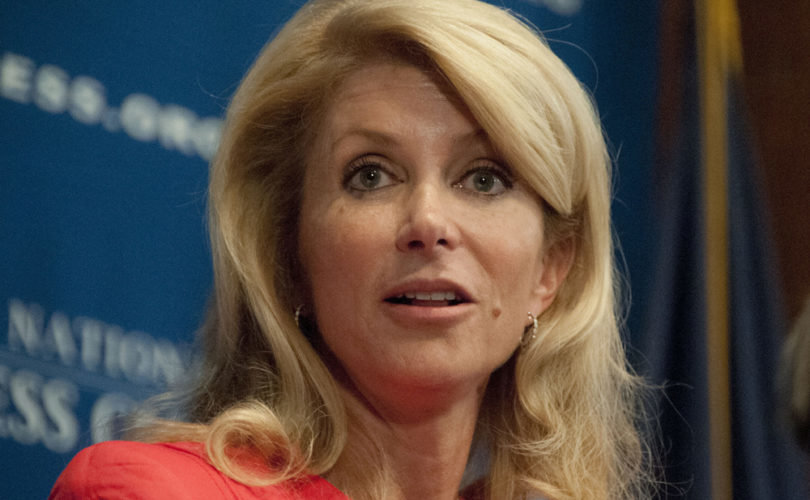 Republicans have vowed not to hold any hearings, much less vote, on any candidate named to the court by President Barack Obama.

On the call, Davis said this “obstruction” hurts the nation at large.

“Never in the history of the U.S. Senate have we seen such obstruction as we’re seeing here,” Davis said.

“The reason, of course, behind the obstruction is simple,” she continued. “Republicans do not want President Obama to pick the next justice.”

Senate leaders have said the American people should be able to select the president who will appoint the judge, making the election a referendum, in part, on the balance of the court.

That's what worried Davis. “The integrity of the [Affordable Care Act] and Roe v. Wade are at stake here, and it's certainly the case…that the GOP is cheating the American people out of having a full court to decide on these issues of national importance.”

Davis shot to national recognition by obstructing a Texas bill designed to assure that abortionists meet more rigorous health and safety standards, and to protect children capable of feeling pain from abortion after 20 weeks.

After her 11-hour filibuster and other legislative obstruction ran out the legislative clock, she declared victory. Ultimately, then-Governor Rick Perry called the legislature back into session, and it passed the bill, which he signed into law.

“Over half of our clinics in the state have closed,” Davis said Wednesday. That case is before the Supreme Court, with oral arguments tomorrow morning.

Davis has played a less significant public role since she lost her bid to become governor against Greg Abbott by a landslide in 2014. She recently held a moving sale – offering people the opportunity to purchase a replica of her pink tennis shoes, as well as designer clothes from Gucci and Chanel.

Meanwhile, Senate Republicans today reiterated they would not hold hearings for any Supreme Court nominee until after a new president is sworn in next January. Senate Majority Leader Mitch McConnell and Sen. Chuck Grassley met with Obama, Joe Biden, and their Democratic counterparts inside the Oval Office and said they could not be moved.

Sen. Grassley wrote a post for SCOTUSblog emphasizing the Senate's constitutional role as a co-equal branch of government.

Sen. Grassley contrasted Justice Scalia's use of original intent with President Obama's statements that his appointees would draw on their experiences to interpret the Constitution as a living document whose meaning is subject to flux.

“The American people deserve the opportunity during this election year to weigh in on whether the next Justice should apply the text and original meaning of the Constitution, or, alternatively, his or her own life experiences to changing times to advance his or her own sense of what would be 'just decisions and fair outcomes,'” he wrote.

Wendy Davis: I aborted my baby girl ‘out of love’ (video)
Why I called Wendy Davis ‘Abortion Barbie’ and stand by it: pundit