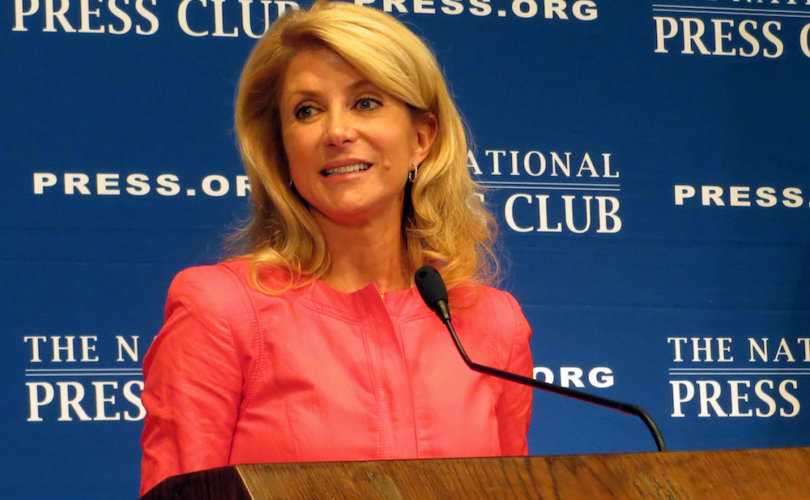 The Notre Dame College Democrats invited Davis, and the event was also sponsored by the University’s Progressive Student Alliance, Notre Dames, Women in Politics, bridgeND, and the Department of Gender Studies.

The Notre Dame Gender Studies website advertisement for the event called Davis “a modern-day Texas heroine” who had filibustered “devastating legislation seeking to limit women’s access to abortions and reproductive healthcare in the state of Texas.”

The Cardinal Newman Society, which defends faithful Catholic education, offered a strong rebuke over the invite. Director of Communications Adam Wilson told LifeSiteNews, “Catholic universities betray their fundamental identity when they give public opponents of Church teaching a campus speaking platform. They also betray their students and the Catholic families that expect the get what they paid for: a consistent Catholic identity.”

Davis’s talk, “Rising Up: From Single Mother to Harvard Law, How Every Woman Stands to Make a Difference,” relied on the well-worn argument of pro-abortion activists that women need abortion and contraception to succeed in life.

Davis also used her appearance to tout Planned Parenthood by perpetuating its image as a women’s healthcare provider, saying that one of the most important opportunities that allowed her to get to where she was in life that her mother and grandmother had not, was access to the abortion giant.

“It was my access to the only healthcare that I had for four years, at a Planned Parenthood clinic near my home,” said Davis. “That clinic provided me my woman care, my cancer screening and diabetes screening. But it also was a place where I could get counseling.”

The Texas bill Davis filibustered in 2013, SB5, was intended to prohibit abortion past the point of pregnancy when it’s been proven that children can feel pain. The legislation also expanded safety regulations for abortion providers and facilities.

The vote was not delayed by Davis’s filibuster, but rather by a mob of abortion activists protesting and screaming at the statehouse. Then-Texas Governor Rick Perry called a special session, and the bill was ultimately passed.

Davis told Notre Dame students there her choice to abort her unborn child in the wake of an adverse medical diagnosis was made out of love.

“[I was] post-20 weeks of pregnancy of a much-wanted pregnancy that I had waited years to have, and … our very much-wanted child was suffering from a fatal fetal brain abnormality,” she said.  “What we were told was that if our child survived delivery, which she would likely not, that she would live a life of tremendous suffering — if she lived long at all — and we made a decision out of love.”

Davis said her own late-term abortion is what triggered her notorious 11-hour filibuster at the Texas statehouse in 2013 against a proposed ban on most abortions after 20 weeks.

“That was my decision to make; it wasn’t a decision that a legislature made for me,” she said. “The issue of [abortion] is not to impose our ideas on other people — particularly when we may not understand the position a person is in, and the decision she is making.”

In a post on the Davis event the Cardinal Newman Society (CNS) pointed to documents on abortion exceptions from Catholic pro-life apostolate Human Life International (HLI) in response to Davis’s contention that she aborted her child out of love.

Abortion of children because of their disabilities is “nothing more than eugenics, discrimination of the basest kind,” the HLI text said.

“Even if a baby will die shortly after she is born, what is a more civilized response — to hold and love her in the short time she has on this earth, or cut her apart with a vacuum curettage machine?” HLI’s statement continued. “It is easy to love the perfect; but how much we are willing to give to the imperfect is the true measure of love.”