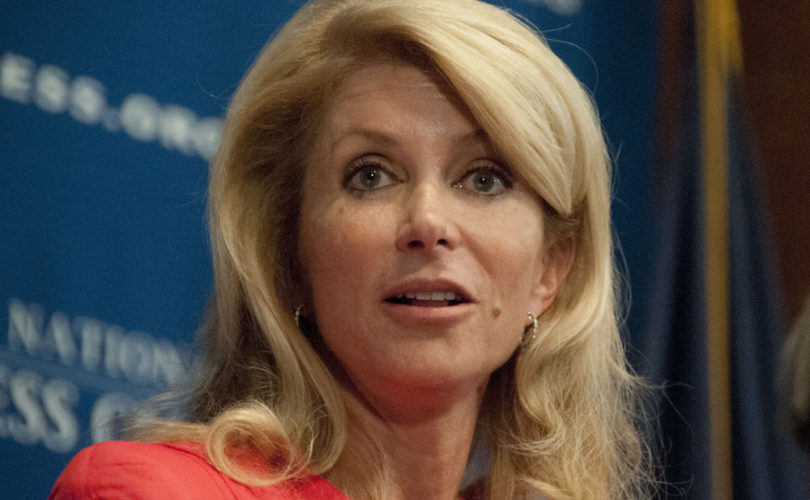 Abortion made Texas gubernatorial candidate Wendy Davis a national figure, and launched her candidacy for governor. Now, in a new book out this week, Davis says that she has had two abortions in her life.

The first, done in 1997, was for fetal defects Davis says left the baby suffering, and would likely have ended in the baby's death. So she and her then-husband decided abortion was their best choice, according to the Democratic Party nominee.

In the book, Davis says the decision created “an indescribable blackness [that] followed [the abortion]. It was a deep, dark despair and grief, a heavy wave that crushed me, that made me wonder if I would ever surface. … And when I finally did come through it, I emerged a different person. Changed. Forever changed.”

It has also been reported that Davis aborted another baby, this one an ectopic pregnancy that Davis has previously said endangered her life.

The baby in the 1997 abortion was named “Tate Elise,” and the other baby was “Baby Jacob.” Davis and her ex-husband have two older children.

The New York Times reports that in the book, Davis says aborting Tate was a horribly difficult decision. “In our doctor’s office, with tears flowing down both our faces, Jeff and I looked at our baby daughter’s beating heart on the sonogram screen for the last time,” she wrote. “And we watched as our doctor quieted it. It was over. She was gone. Our much-loved baby was gone.”

Yesterday, one day before the book arrived in Fort Worth, with the nationwide launch tomorrow, Davis told supporters, “I am proud of my life's journey and I'm proud to share it with Texans because I trust Texans to understand and see in my story, someone who will fight for them.”

Numerous studies have shown that Davis' “deep, dark despair and grief” are common after women have abortions. For example, studies in in 2006 and 2008 found links between signs of mental illness, such as increased levels of counseling, depression, and increased marijuana use, and past abortions.

A large Chinese study that examined nearly 7,000 women found that having an abortion within the prior twelve months led to a 97 percent greater chance of depression in the following pregnancy. And a 2013 meta-study done in Italy determined that there were greater chances of depression, substance abuse, and post-traumatic stress disorder for women who had an abortion compared with women who bore their children or miscarried.

Davis is losing in her race against the Republican nominee, pro-life Texas Attorney General Greg Abbott, by a dozen points according to the Real Clear Politics average of polling.