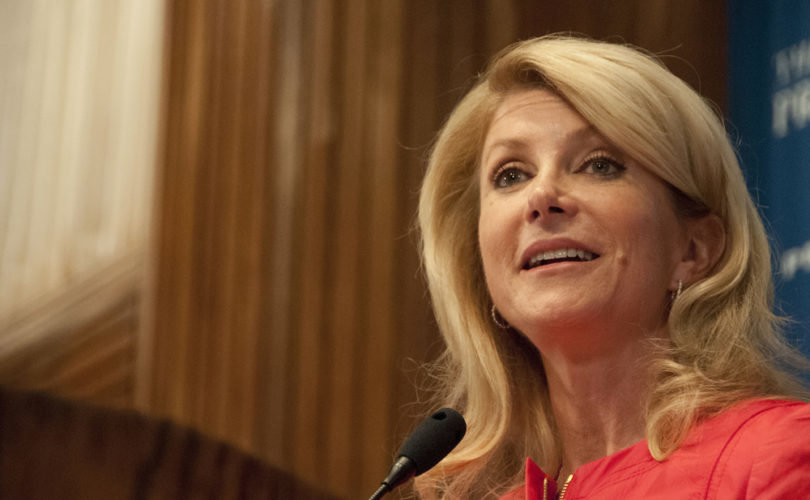 “We will not be blackmailed by the president's 30 pieces of silver,” Lt. Gov. Patrick said. “I believe it is the biggest issue facing America since prayer was taken out of schools.”

But Davis told Evan Smith, the editor of the liberal Texas Tribune, that legislators would vote against any proposal requiring transgender people to use the intimate facilities of their biological sex.

“I’ve seen bad things die a quiet death,” Wendy Davis said. “I'm hoping this will be among them.”

Although she has been an outspoken advocate for abortion-on-demand – saying that abortion is “sacred ground” and stating that she chose to abort her unborn baby girl “out of love” – she has become increasingly vocal in support of the homosexual and transgender political agenda.

In April, she co-authored an op-ed in The Advocate saying that pro-life laws and opposing transgender bathroom bills are both part of the same “War on Women.”

“Seeking to legalize anti-LGBT discrimination and restrict access to lifesaving reproductive health care” – by which she meant abortion-on-demand – “are undoubtedly…part of a singular war” waged “against the rights of people that voter base simultaneously hates and fears,” she wrote.

In 2013, she supported a San Antonio city ordinance establishing special rights for transgender people in its non-discrimination policy, effectively elevating “gender identity” to the same status as such immutable characteristics as race and biological sex.

“I look forward to a Texas where we see that in every city in the state,” Davis said at the time.

When given the chance to weigh in on the matter, voters in the heavily Democratic city of Houston rejected that city's transgender bathroom ordinance by a landslide last November.

Yet Davis, who lost her 2014 race for governor of Texas by a blowout, has remained one of the most high-profile spokespeople in support of abortion after the point that the child can feel pain.

Davis endorsed Hillary Clinton last September and stumped for her on the campaign trail, where the former first lady is still locked in a tight battle with Senator Bernie Sanders of Vermont. On May 20, Davis attended a Clinton fundraiser in Austin, taking along her one-month-old granddaughter, who got a picture with Clinton. Between campaigning and fundraising for Clinton, Davis founded a new feminist political organization, Deeds Not Words.

Wendy Davis: I aborted my baby girl ‘out of love’ (video)