Wendy’s founder and my family asked Congress to make adoption more affordable 25 years ago. They did

'That was quite a day for us, and remains one of the proudest moments of our lives.'

WASHINGTON, D.C., January 17, 2020 (LifeSiteNews) – Twenty-five years ago, on January 18, 1995, my wife, Valerie, our 13-month-old adopted son, Michael, and I joined Wendy’s Founder and CEO, Dave Thomas, in asking Congress to make adoption more affordable so that more children might find their way into the homes of loving parents.

The measure –– a provision in the Contract With America for a $5,000 tax credit for adoptive families–– passed, and President Bill Clinton signed the bill into law.

That was quite a day for us, and remains one of the proudest moments of our lives.  Later that year we welcomed Michael’s newborn baby brother, Christopher, to our family. And although the adoption bill was signed into law too late for our family to derive any financial benefit, we are thrilled that the tax credit has put adoption within reach of so many other families across the U.S. who otherwise might not be able to afford to adopt. 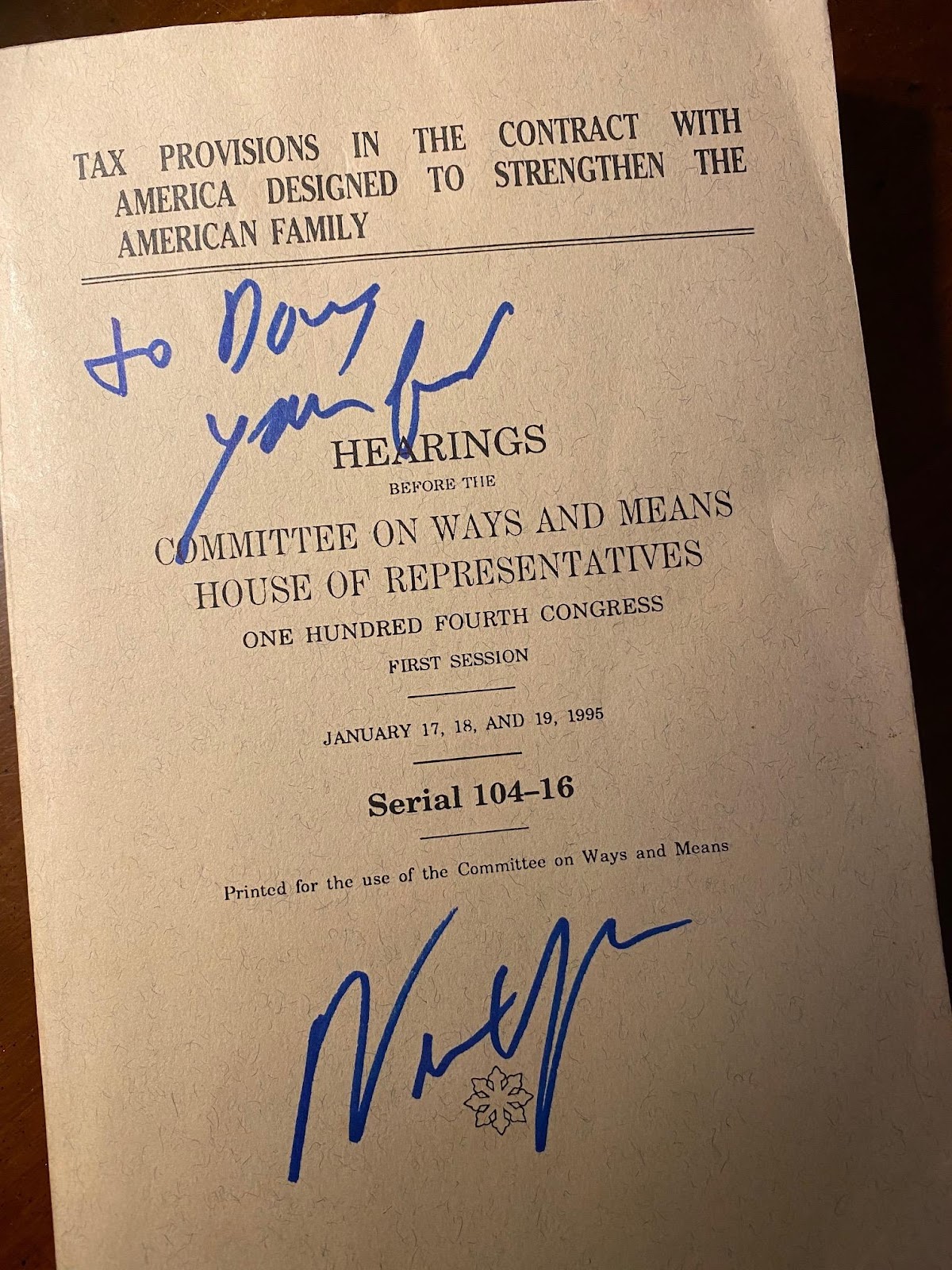 Then-speaker of the House, Newt Gingrich ––the mastermind behind the Contract With America and a driving force behind its adoption provision–– autographed our copy of the Congressional Record containing our testimony. Photo:  Doug & Valerie Mainwaring

I was deeply moved by Dave Thomas’ testimony as he explained why the subject of adoption was close to his heart:

I know first-hand how important it is for every child to have a home and a loving family.  I was born out of wedlock and adopted when I was six weeks old. I never knew my birth parents. Life wasn’t easy ––My adoptive mother died when I was five, and my father remarried and moved from town to town looking for work.  But without a family, I would not be where I am today.

Dave Thomas shared a copy of the text of his testimony with us. Photo: Doug & Valerie Mainwaring

Dave went on to persuade the members of Congress sitting before us as only he could do, making an unassailable common sense, pragmatic argument for making adoption more affordable and less bureaucratic.

These paragraphs were in bold lettering in his notes:

In closing, for all the young boys and girls waiting in the system to be adopted, I ask you to remember this:  It’s not their fault. They can’t change their situation … They can’t solve their problems by themselves.  But together as partners in business, government and local communities, we can make it easier for these children to become part of a loving family.

Adoption gave me a proper start in life.  Let’s help parents adopt a special child. They grow up to be special people. 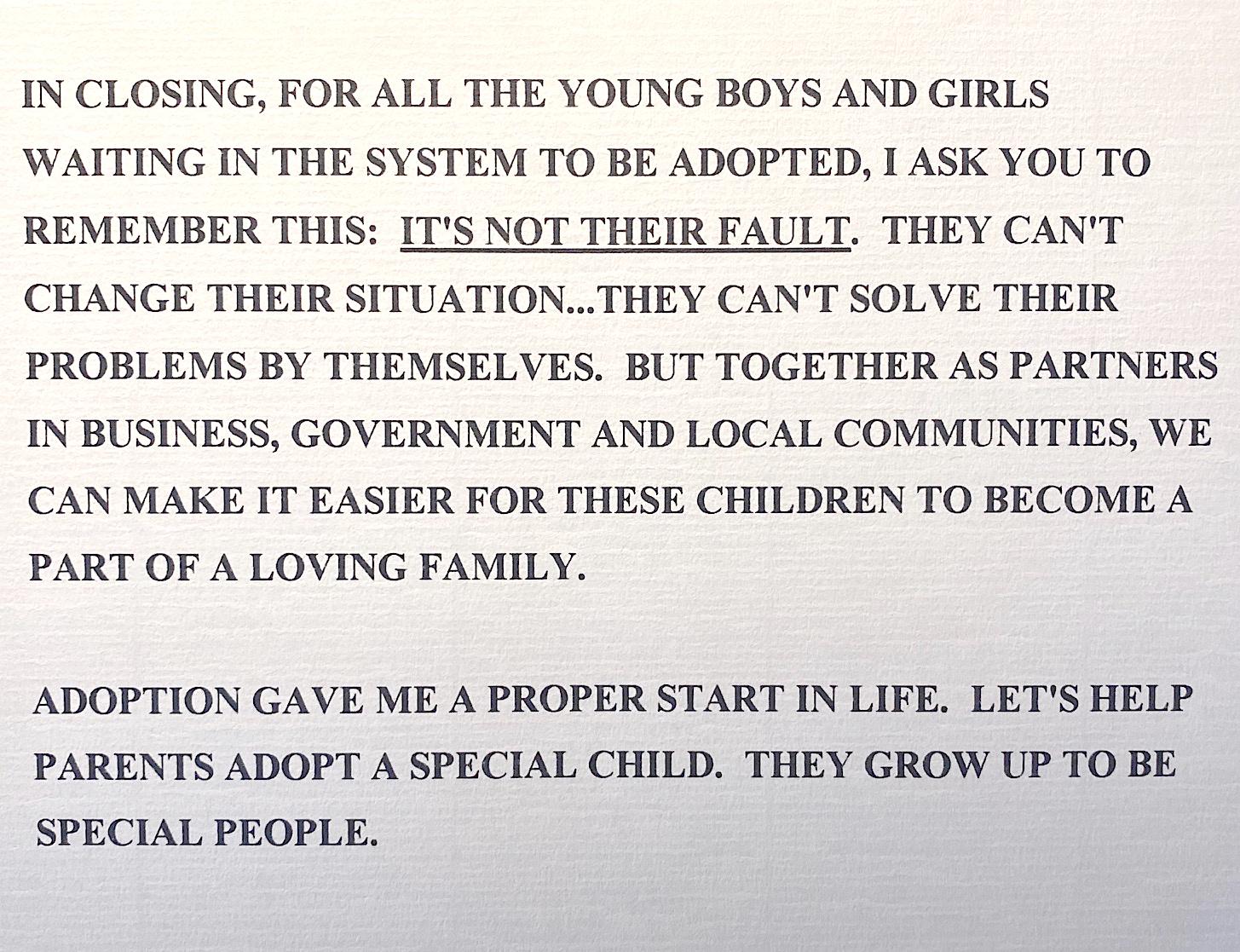 In the weeks leading up to our testifying before the House Ways & Means Committee, Valerie and I were briefed on what to expect by Bill Pierce, President of the National Council for Adoption, and others.

I was naive back then, and was shocked when we were told that some Democrats in Congress essentially viewed adoption as the “enemy of abortion” and might ask us “nasty questions” during the Q&A following our testimony.

I wondered, “How could anyone be against adoption?”

One of the questions we were warned might be put to us horrified me:

You talk about a tax credit for your child:  Wouldn’t it be cheaper to provide federal funds so his mother could have terminated the pregnancy?

Up until that point, it had never occurred to me that an elected member of Congress might have preferred to have had my son ––sitting next to me on my wife’s lap as we testified–– killed in his birth mother’s womb rather than be present with us in that hearing room.  Yet we were advised that at least one member of that committee thought that way.

That was enough to permanently transform me into a committed pro-life activist.

In anticipation of writing about this anniversary, I wrote to the current CEO of the Dave Thomas Foundation for Adoption, Ms. Rita Soronon, a few months ago hoping to schedule an interview with her about the organization’s achievements over the last 25 years.

She agreed. I decided, however, not to go ahead with the interview when her assistant advised me that there were two topics that would be off-limits:  1.] The Foundation’s choice to not take a stance for or against abortion and 2.] The Foundation’s support of adoptions by homosexuals.

Those were the two topics I was most curious about.  I realize these issues are radioactive for a secular organization like the Dave Thomas Foundation which aims to serve as broad a public as possible, but I had hoped to find out if Dave Thomas himself would have supported those positions.

That said, in the corporate world, Wendy’s stands in sharp contrast with the vast number of well-known corporations actively funding abortion.  The organization’s dedication to helping kids who are typically more difficult to place ––those who are older, have special needs, or are part of a sibling group–– to find their way into loving families before they “age out” of the system is filling a desperate need.

In particular, the foundation has developed Wendy’s Wonderful Kids program which has proven to be up to three times more effective at serving children who have been in foster care the longest ––a true God-send for children who might otherwise enter the world as young adults with the scary proposition of having no permanent family.

To understand the position that these kids are in, and witness how their lives are changed by the Dave Thomas Foundation, watch this short video.

In an age where corporations threaten to pull out of states that seek to limit abortions within their borders; and where a movie actress can shamelessly tell the world that she won her Golden Globe Award thanks to having aborted her child ––and then have the room full of Hollywood celebs and moguls erupt into applause–– Wendy’s stands alone in its commitment to adoption.

If you want to see which major corporations give money directly or indirectly to Planned Parenthood, the group 2nd Vote has compiled a list which can be found here.

By the way, when the Adoption Tax Credit was about to be signed into law, Valerie and I received a call from a member of First Lady Hillary Clinton’s staff, inviting us to attend the signing ceremony at the White House.

When we were told that our young sons ––who were the reason for our effort to help get the law passed in the first place–– would not be allowed to attend, we declined without regret:  “No, thanks. We’d rather stay home with our boys.”