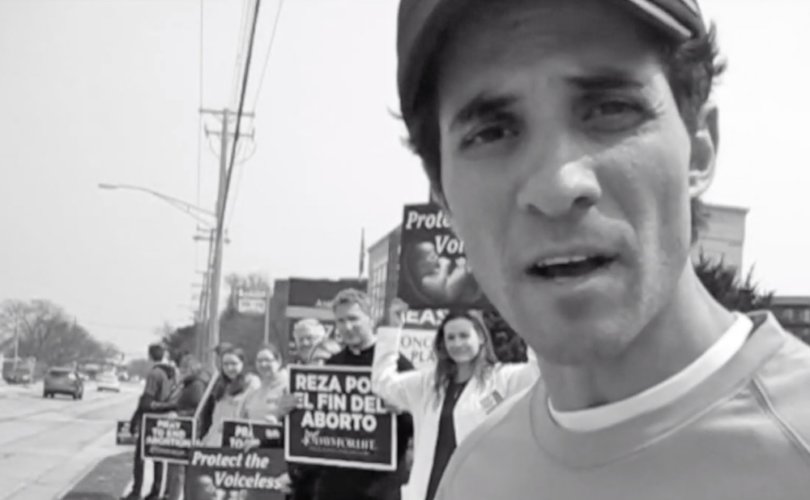 CHICAGO, Illinois, June 12, 2020 (LifeSiteNews) – A Catholic dad in Illinois, dismayed over Cardinal Blase Cupich placing severe post-pandemic restrictions on the resumption of public Masses in the Archdiocese of Chicago, has launched a public campaign to have churches fully reopened.

Joe Lazar, a father and pro-life activist, has launched a campaign called “Reopen my Church.”

“Catholics in the Archdiocese of Chicago are being persecuted by our local leadership in an unprecedented fashion,” Lazar said to LifeSiteNews, pointing out that it is Cardinal Blase Cupich who is ultimately responsible for the severe restrictions that, in effect, result in the faithful being denied the Sacraments.

“Cardinal Cupich has ignored nearly every attempt by credible Catholic leaders in Illinois to dialogue further on the subject,” Lazar said, adding that “if action is not taken, it is a matter of time before reverent devotion in the densely Catholic city of Chicago will be dissolved” and will become an “unrecognizable practice.”

A petition that Lazar launched online states: “The Catholic Mass must be restored to a level commensurate with grocery stores and pharmacies as soon as possible! Please let your bishops know that you cannot quietly accept the ‘inessential’ status of the Sacraments in Illinois by signing this petition.”

“As many in the world today grapple with concern over death, Catholics are unable to receive that which our Lord Himself stated is necessary for eternal life,” the petition, which can still be signed online, states.

“The decision to extinguish the Sacraments, while nearly every material good remains available, renders the Sacraments inessential by default. This goes against everything the Catholic Church has taught us regarding the Sacraments,” the petition continued.

Addressed to the auxiliary bishops in the archdiocese of Chicago, the petition concluded with a number of questions:

Are the Sacraments essential, or not? Are we willing to be misunderstood, shamed, and even persecuted by society for our devotion to Jesus Christ? Will we accept the fact that our elected state leaders have clearly made material goods essential and constitutionally protected religious practice inessential, and even, potentially punishable? Will we use this time as an opportunity for bold evangelization through personal witness, or choose to quietly capitulate?

The petition urged Catholics “to trust in Jesus Christ, regardless of what it might cost us as individuals.”

In a video, Lazar recounted how events in the state of Illinois, as well as in the archdiocese of Chicago, unfolded amid the coronavirus pandemic.

On March 20, Governor Pritzer, a Democrat, stated in his stay-at-home order, “Pursuant to current guidance from the CDC, any gathering of more than ten people is prohibited unless exempted by this Executive Order.” Since religious services were not mentioned in the document, public Masses, albeit with only a very small congregation, would still have been possible.

Cupich had not only suspended public Masses, however. He also told his priests that all baptisms “must be postponed.” Even “emergency” baptisms, where the child is in danger of death, required the “permission” of the local ordinary.

Already on April 22, several Catholic leaders had asked Cupich in a letter “to get back to a real, present Mass and to receive Jesus in the Blessed Sacrament.”

“In some dioceses parking lot Masses have been authorized. Many of our churches are large enough that we could easily follow the social distancing protocols and advise those at greater risk to refrain from attendance,” they pointed out.

“Perhaps you have a plan in mind already,” the Catholic leaders were hopeful.

Just over a week later, on April 30, Catholics in the Windy City formed the St. Charles Borromeo Society for the purpose of reopening the churches in the archdiocese.

Cardinal Cupich refused to meet with the group, letting his flock know that “after careful review and consideration, the Cardinal regrets that this is not an opportune time for such a meeting.”

Joseph Scheidler, one of the Catholic leaders who had sent the letter on April 22, asked, “When would be an opportune time? We are desperately in need of spiritual leadership during this pandemic and that is sorely lacking in the Archdiocese of Chicago.”

On May 13, Cardinal Cupich published his guidelines for reopening Catholic parishes.

“Phase I allows for parishes to reopen for Baptism, Reconciliation, Weddings and Funerals with a limit of 10 attendees,” Cupich declared. “Phase IA allows for parishes to reopen for private prayer and adoration with a limit of 10 attendees. Given the training schedule noted above, it is anticipated that all parishes, if they choose to do so, could be opened by May 23 for Phase I and by May 30 for Phase IA.”

Most parishes are currently in Phase IA. For those parishes to move on to Phase II, which would allow for the resumption of public Masses, they would have to “apply for certification to offer daily and Sunday Mass.”

Parishes are required to prepare and submit “a detailed proposal for implementing Phase II,” including maintaining “an on-going procurement program for safety and cleaning supplies” and developing “logistical procedures in accord with the guidelines of the Plan to manage more frequent and larger services that cover actions before, during and after the rites.”

Very few parishes have implemented Phase II, according to the video. During Phase II, the reception of Holy Communion on the tongue, the traditional practice of the Church, is banned.

Lisa Bergman, one of the founders of the St. Charles Borromeo Society, wholeheartedly rejected the guidelines, saying Cupich’s remarks were laced with “secular wisdom.”

“Cardinal Cupich has blithely yielded the Authority of the Church and subjugated the primacy of her worship to laws of man which are being successfully challenged by other denominations,” she said.

“This monstrous triple betrayal of Christ and His Church, from beginning to end, normalizes the narrative that the Church is secondary and must abase itself as though it were merely a place of recreation,” Bergman added.

Meanwhile, already on May 2, several pastors ministering to Romanian Christian congregations in the Chicago area had told Governor Pritzker that they were going to defy his executive order limiting religious gatherings to only ten people.

“Please be advised that, beginning on May 10, 2020, our congregations will resume in-person church gatherings, and we will no longer adhere to the 10-person limit or the other unconstitutional restrictions comprised within your orders,” the pastors wrote.

Governor Pritzer, in turn, was forced to remove all restrictions on religious services following various lawsuits. Supreme Court Justice Brett Kavanaugh, who was nominated by President Donald Trump, ordered Pritzker to respond to one particular lawsuit by May 28.

Before that deadline, Pritzker issued new non-mandatory guidelines for churches and other places of worship. The guidelines continued to recommend social distancing, face masks, and limited attendance, as well as excluding singing, refreshments, and close physical contact, but church leaders were free to implement them as they saw fit.

In spite of Pritzker’s new guidelines, the archdiocese of Chicago under Cardinal Cupich has failed to update his plan for the resumption of public Masses.

As lay Catholics, led by Joe Lazar, said in their petition, “Essentially, a shorter earthly life with an undying devotion to the Lord through the Sacraments is more essential than a longer life, which is void of a metaphysical reality.”