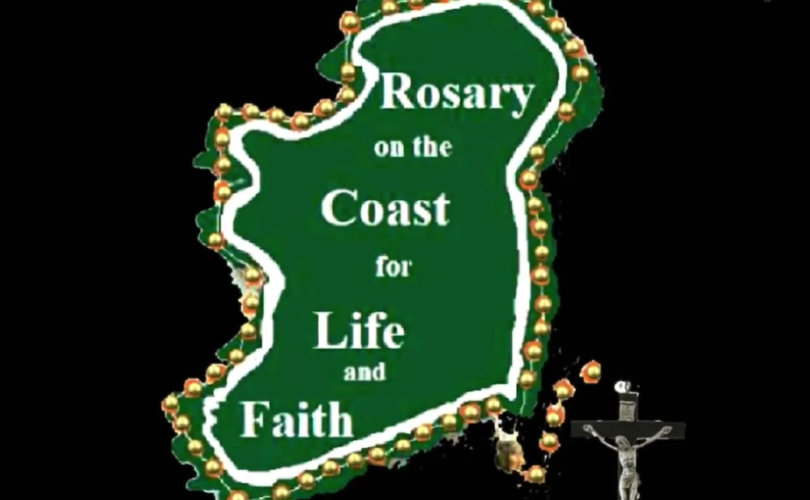 CORK, Ireland, October 31, 2017 (LifeSiteNews) — A small group of young people and a self-described “dinosaur” are organizing a mass recitation of the rosary that will stretch around Ireland’s coasts, spiritually uniting Northern Ireland and the Irish Republic in their shared love of life and faith.

The Irish “Rosary on the “Rosary on the Coasts for Life and Faith” will take place around the island’s coastline on Sunday, November 26, 2017, the Roman Catholic feast of Christ the King. Those who gather will be praying for a renewal of the Christian faith in Ireland and for the preservation of the pro-life laws in Northern Ireland and the Republic.

“We’re in a life and death struggle,” organizer Kathy Sinnott (the self-described dinosaur) told LifeSiteNews, “both in the North and the South.”

An erosion of the Catholic faith in Ireland has led to a proposed referendum that may overturn the constitutionally protected right to life of the unborn person in the Republic, and pressure from the more secular mainland has threatened the unborn in the North. Already the London-based UK government has announced plans to pay for the abortions and travel expenses of Northern Irish mothers. Northern Ireland is the only part of the UK with strong pro-life laws.

Sinnott told LifeSiteNews that she and her four young fellow organizers, Ann-Marie, Lisa, Mike and Catherine, were inspired by three things: “the situation we’re sleepwalking into;” the Polish and Italian border rosaries; and a national consecration of Ireland on December 8.

“We felt that no one was doing anything [in terms of public prayer]” to avert a pro-abortion disaster across Ireland, Sinnott explained.  Although the Irish pro-life movement has been working very hard, she believes what is needed now is some “spiritual pushback.” In recent years, Irish pro-life organizers have been trying to minimize outward expressions of Catholic faith during pro-life demonstrations. However, Sinnott says Irish pro-lifers are beginning to understand that “we can’t do it alone.”

“In Ireland, we’re finally realizing that it’s a spiritual battle — and this time there’s no more ground to be lost,” she said. “This time it’s abortion on demand — if not at once, then down the road.”

The organizers of the Rosary on the Coast for Life and Faith expect “tens of thousands” of people to amass at the coast on November 26. They hope there will be 53 locations: one for each Hail Mary in a single rosary; 37 have already been confirmed. The service will begin at 2:30 p.m. so that people can get off the dangerous coastal roads by Ireland’s early nightfall.

The group chose November 26 for their coastal prayer service because Ireland was the first country to be consecrated to Christ the King. According to the organizers’ press release, ”acknowledging Christ as King has relevance for the spiritual, social, cultural, legal and political life of Ireland.”

So far, four bishops have signaled their interest and willingness to help, Sinnott told LifeSiteNews. One has already said he will attend the Rosary on the Coast.

Anyone who can travel to the coast of Ireland and pray the prayers of the “Rosary on the Coasts for Life and Faith” program, with at least one or two other people, should contact the organizers to tell them where they are going. “Once your location is published, others will come,” they promise.

ROSARY ON THE COASTS FOR LIFE AND FAITH PRAYER PROGRAM