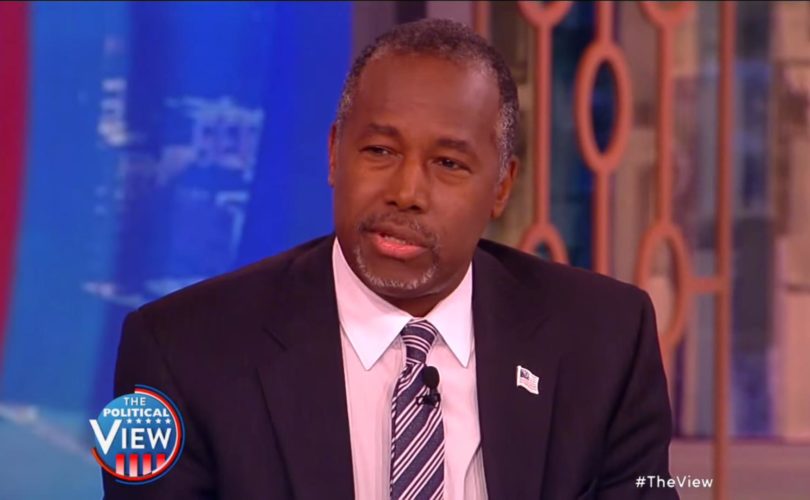 NEW YORK, October 9, 2015 (LifeSiteNews) — Republican presidential candidate Ben Carson explained his views on abortion during an appearance on ABC’s The View on Tuesday.

When co-host Whoopi Goldberg asked Carson to explain what he meant by saying there’s “not a war on women, but there may be a war on what’s inside of women,” he replied:

We’re killing babies all over the place. I’ve spent my entire career trying to preserve life and give people quality of life, even operating on babies in the womb, operating all night long sometimes on premature babies. And I get to meet those people when they’re adults, and productive adults.

“There is no way you’re going to convince me that they’re not important, that they’re just a mass of cells and we can do anything to them,” he added.

Goldberg then asked Carson if he was empathetic to women who have to make what she called a “horrendous decision” about whether or not they can “bring a child into the world.”

“I’m very empathetic,” he answered. “What I have said is that this is a job for us in the private sector. What we need to do is make sure that we provide adequate daycare centers for these mothers so that they can get their GED, their social security, their bachelors degree, their masters degree.”

When Goldberg said that her question referred to women who simply make the decision to abort, Carson replied:

“Let me tell you a fact: A lot of those young girls who are having babies out of wedlock, when they have that first baby, they stop their education, and that child is four times as likely to grow up in poverty. We as a society have an obligation to do what’s necessary to stop that cycle from occurring.”

Carson was then pressed by co-host Joy Behar to state “how important” birth control is to the Republican party to help stop the cycle from occurring.

“Are you against birth control also,” she asked.

A CNN poll in August indicated that Republicans most trust Carson and Mike Huckabee to handle the issue of abortion. However, a series of statements from Carson's campaign and from Dr. Carson himself raised questions about the clarity of his pro-life views about when life begins, how RU-486 works, and his views on experimenting with aborted fetal tissue.

Earlier in August, the Carson campaign defended his decision to refer women to abortionists if the child suffered from fetal deformities. Carson had told the Baltimore Sun in 1992 that “as a physician who does not believe in abortion, when faced with a patient who has severe medical problems, I would refer someone for an abortion.”

Also in August Carson defended using aborted babies' cells for research, calling it “foolish” to refuse to use the tissue from a tissue bank regardless of where it came from.

Also in the same month, Carson when asked in a Fox News interview when life began replied “certainly when the heart starts beating,” and said that rape victims should be administered the abortifacient RU-486 as part of a trip to the emergency room.

However, in a subsequent interview with ABC, Carson clarified that he believes life begins at conception, and that he was only saying that most people can agree that life certainly begins by heartbeat. “What I believe is life starts at conception. I’ve said there are a lot of people who think that — that [life begins] at the heartbeat,” Carson said. “And I think most people can come to the conclusion that once you have a heartbeat, that you clearly have a living organism.”

In a subsequent statement his campaign said, “Dr. Carson believes abortion is not acceptable after conception.”

Rick Santorum refuted Planned Parenthood on ‘The View’ in the sweetest way possible (video)
The View cast defend Bill Maher after he called Trig Palin ‘retarded’
‘The View’ takes on the sonogram law: as told by an unborn baby