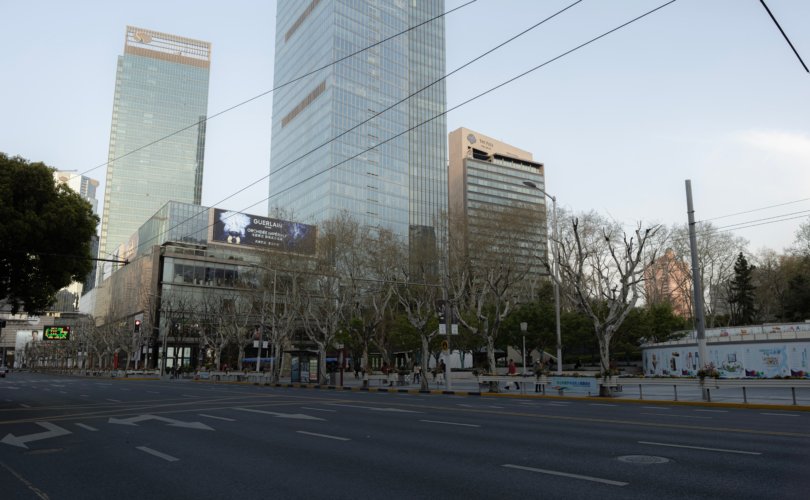 SHANGHAI, China (LifeSiteNews) — During Chinese vice premier Sun Chunlan’s recent visit to Shanghai, she was met with the cries “There’s no food left!” and “We’re starving to death!” from locked-down residents shouting from their apartment windows.

A video posted by district residents reportedly shows that Sun, surrounded by local officials, cameramen, and police vehicles, showed no reaction to the shouts from the apartment-bound residents, many of whom have been under lockdown since at least March 17.

Official city lockdowns were recently enforced for the eastern half of Shanghai beginning March 28, and for the western half of Shanghai beginning April 1. However, according to American lawyer and Pudong resident Jared Nelson’s recent tweets, his apartment community and most others in Shanghai had already locked down by March 18, with “no one allowed in or out.” On March 17, he had shared that 80 percent of his company’s staff were in some kind of home lockdown.

He had tweeted March 9 that although “compliance” with COVID measures was “still high,” there were “worries” due to what he said was the “largest spike we’ve seen during the pandemic in Shanghai” of COVID-positive tests.

Since April 1, Nelson described his difficulties obtaining food by ordering online, especially certain staple foods like meat and fruit, due in part to lack of stock.

An anonymous Shanghai resident told The Epoch Times about a week ago that on April 1, he received a bag of rice, a small container of cooking oil, and a pack of powdered milk from community officials, noting that the scarce amount of food provided to residents “creates major challenges for big families,” since a family of five or six people could finish all of their delivered food in just days.

On April 2, the day of Sun’s inspection visit, Nelson tweeted, “Day 16 of our Covid lockdown in Shanghai today and food is the key thing on people’s minds. We aren’t allowed to leave home so delivery is the only way. I was up at 6 am yesterday trying to get any kind of delivery, but nothing was available all day. So far, same results today.”

On Sunday, Nelson shared, “We still struggle to find food and drinking water.”

Catholic radio host and apologist Patrick Madrid shared a video taken April 7 in which one can hear people screaming and yelling from their Shanghai apartment windows, after many of them have been locked down for weeks.

In what some have remarked is a “dystopian” scene, a drone has been dispatched in Shanghai to instruct residents, as it flies past the apartment buildings, “Please comply with COVID restrictions. Control your soul’s desire for freedom. Do not open the window or sing,” according to Alice Su.

Without mentioning any acknowledgement by Sun or other government officials of Shanghai residents’ concerns about adequate food supply, The Epoch Times reported that Sun doubled down on Beijing’s “zero COVID” policy upon her visit, with the message: “Unswervingly adhere to the zero-COVID policy and win the battle against COVID as soon as possible!”

On April 4, Sun had ordered the municipal government to “achieve zero COVID in society at large as soon as possible,” excluding quarantine hospitals.

Sun, one of four Chinese vice premiers and a former head of the United Front Work Department, began to relay Beijing’s COVID-related orders to Chinese cities since 2020, according to The Epoch Times.

Shanghai is not the first city with residents who have clamored to Sun about food needs during COVID restrictions. During a December 2021 visit to the locked-down Xi’an city, residents were recorded shouting, “I want to eat!” When Sun visited Jilin City in late March, residents shouted from their apartments, “We have no vegetables!”

According to The Epoch Times, the city of Shanghai issued a notice saying the lockdown would continue until at least May 1.

With about 25 million residents, Shanghai is the most heavily populated city proper in the world.