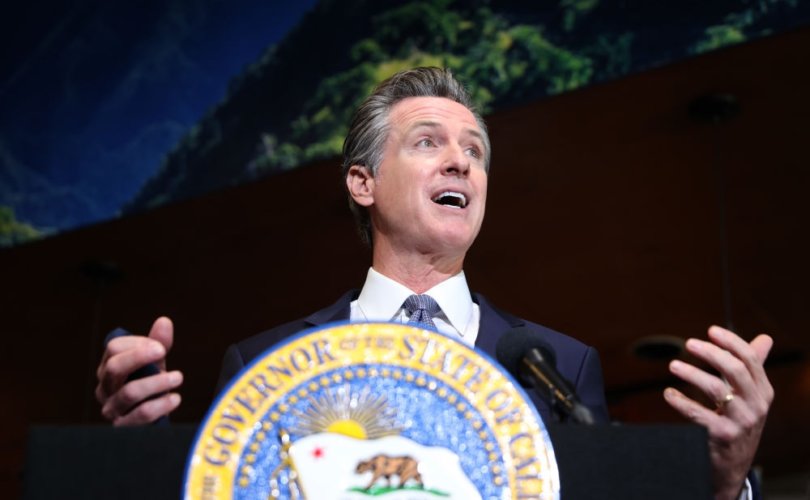 (LifeSiteNews) — Following the monumental overturning of Roe v. Wade by the U.S. Supreme Court on Friday, the leftist governors of California, Oregon, and Washington released a joint statement announcing the launch of a multi-state pact to ensure women can still kill their unborn babies on the West Coast of the United States.

Democratic Governors Gavin Newsom of California, Kate Brown of Oregon, and Jay Inslee of Washington signed the “Multi-State Commitment” Friday declaring that “all people seeking abortion and other reproductive health care services” will find “a safe haven” in their states.

“This Multi-State Commitment affirms the governors’ commitment in response to the U.S. Supreme Court’s unprecedented decision to strip away a constitutional right that has been in place for half a century, leaving abortion regulation to the states,” the statement declared.

The governors observed that the U.S. Supreme Court’s Friday decision to eliminate the federal “right to abortion” by overturning Roe v. Wade (1973) and Planned Parenthood v. Casey (1992) will mean that for “more than half the country, home to 33.6 million women, abortion care is illegal or inaccessible.”

Thanks to the rollback of Roe, states are once more authorized to allow, regulate, or ban abortion within their own borders.

Roughly half of all states are expected to outlaw or seriously restrict abortion now that Roe has been overturned. At least 13 states have trigger laws already on the books to ban abortion outright within 30 days of the Court’s reversal.

On Friday, Texas Attorney General Ken Paxton announced that abortion is now illegal in the Republican-led Lone Star State, and declared an annual state holiday to commemorate the lives lost through abortion.

SCOTUS just overruled Roe & Casey, ending one of the most morally & legally corrupt eras in US history. Praise the Lord.

Abortion is now illegal in Texas.

And today I’m closing my office—and making it an annual holiday—as a memorial to the 70 million lives lost bc of abortion.

Newsom: Saving babies is ‘not the California way’

As Republican-led states move to enact protections for the unborn, Democrat-led states have positioned themselves as “sanctuaries” for abortion, actively welcoming women from pro-life states to travel to kill their unborn babies.

In the Friday announcement, California Gov. Newsom argued that protecting the lives of unborn babies in the law “is not the America we know – and it’s not the California way.”

“The Supreme Court has made it clear – they want to strip women of their liberty and let Republican states replace it with mandated birth because the right to choose an abortion is not ‘deeply rooted in history’,” Newsom said, adding that “California has banded together with Oregon and Washington to stand up for women, and to protect access to reproductive health care.”

Newsom promised he and his fellow West Coast governors “will fight like hell to protect our rights and our values.”

Likewise, Oregon Gov. Brown, the first openly bisexual governor in the U.S., said the killing of unborn babies through abortion is “health care, and no matter who you are or where you come from, Oregon doesn’t turn away anyone seeking health care. Period.”

Characterizing the landmark decision by the nation’s highest court to overturn Roe v. Wade as “disgraceful,” Brown told Americans who are “feeling scared, angry and disappointed” and “everyone who needs an abortion” that they “are not alone, and the fight is not over.”

For his part, Washington Gov. Inslee noted that “The law remains unchanged in Washington state,” but argued that “the threat to patient access and privacy has never been more dangerous.”

“Even in Washington state, Republicans have introduced about 40 bills in the past six years to roll back abortion rights and access to reproductive care,” he said. “The right of choice should not depend on which party holds the majority, but that’s where we find ourselves.”

The statement signed by the left-wing governors went on to highlight the pro-abortion actions undertaken by the governors of the liberal West Coast states over the past several years, including a $125 million package introduced by Newsom to expand abortion access in the Golden State.

Newsom has also made it free to kill unborn babies in California by eliminating copays for abortion, and recently signed a legislative package to bolster abortion access.

To the north of California, Oregon’s 2017 Reproductive Health Equity Act had codified the “right to abortion” into state law. Earlier this year, Oregon invested $15 million to expand abortion access in the state, primarily targeting low-income and rural communities as well as people of color.

In Washington, Gov. Inslee required all health care plans in the state to cover abortion and contraception under the 2018 Reproductive Parity Act.

Despite strong pro-abortion language from the leftist governors of California, Oregon, and Washington, however, not all West Coast politicians have decried the Supreme Court’s ruling.

Today, life wins! Roe was created by a partisan, unelected Court nearly 50 years ago and does not represent the values of our nation. It is past time that the radical Democrat one party rule stop imposing their immoral and dangerous agenda on the American people. https://t.co/orTeTLMXRx

“Roe was created by a partisan, unelected Court nearly 50 years ago and does not represent the values of our nation,” he said. “It is past time that the radical Democrat one party rule stop imposing their immoral and dangerous agenda on the American people.”