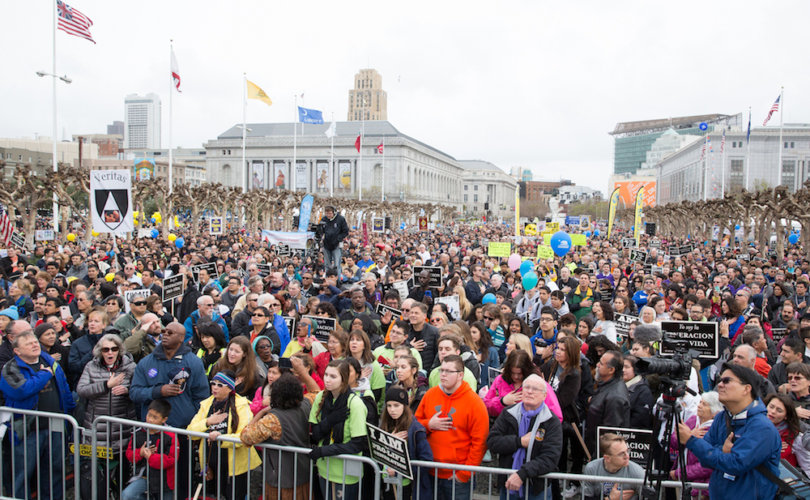 February 2, 2017 (LifeSiteNews) — Nearly 70,000 millennials and members of the pro-life movement filled the streets of San Francisco on January 21 for the 13th annual West Coast Walk for Life in light of the anniversary of Roe v Wade.

Since the Supreme Court decision legalized abortion in the U.S. in 1973, nearly 60 million unborn children have lost their lives.

As the march progressed, protesters appeared behind the secured borders set up by police. Many of them wore bright pink handmade “Pussy Hats” and yelled “My Body, My Choice” and “We won’t go back to the 50s.”

Yet over the noise of the protesters, pro-life marchers linked arms and sang Amazing Grace.

Katie Lodjic attended the march and said it is one of her favorite pro-life events of the year. The atmosphere was electric and filled with hope.

“I was surprised that there were fewer protesters than in years past, but their presence definitely fired up the students who were with me,” said Lodjic, the northwest regional coordinator for Students for Life of America who helped 100 college students come to the march.

Several protesters screamed death threats to the marchers and gave them the finger as they yelled obscenities toward the crowd. Despite the negativity, pro-lifers continued to march and chant, and some even brought instruments to play music.

Peter Yep, Students for Life vice president of communications, attended the march and said the opposition was encouraging for him.

“Even with the presence of the protesters who spewed derogatory hate, we were motivated to stand and march for the pre-born that remain voiceless because of abortion,” he said.

Students for Life of America trains students on more than 1,000 campuses across the country in an effort to bring an end to abortion during their lifetimes, branding millennials as the ‘pro-life generation.’

“We’ve been told so many times that this is the ‘pro-life generation.’ It is not until you go to a march like this that you truly start to believe it,” Yep said.

At one point, protesters organized a rally at the side of the march and played an audio recording through a speaker loud enough for marchers to hear. It was a female voice identifying herself as God. She read 10 commandments that she had created, all of which demanded abortion as necessary healthcare.

Other protesters had “Abortion is Sacred” visibly displayed on their torsos and some brought children wearing “Pussy Hats.”

The march ended miles later and millennials came together for a unified chant: “We Are the Pro-Life Generation!” They applauded the rest of the marchers for completing the peaceful Walk for Life.