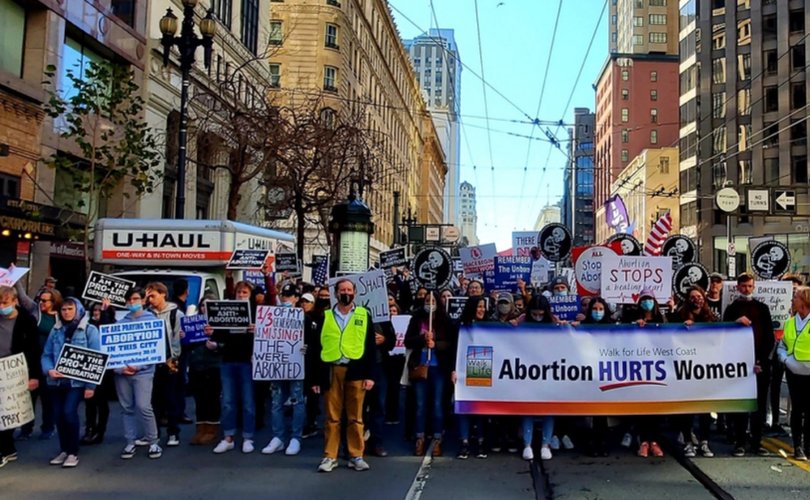 SAN FRANCISCO, California, January 25, 2021 (LifeSiteNews) – The COVID-outbreak along with political unrest did not stop San Francisco pro-lifers from holding the 17th Annual Walk for Life West Coast on the weekend, sending out the message that “abortion hurts women.”

While organizers expected only hundreds to show up at the January 23 walk, they were stunned when almost 2,000 showed up.

“I guess by now I should know better than to sell the commitment of pro-lifers short. I've never been so happy to be wrong,” said Eva Muntean, co-chair of the Walk for Life West Coast.

In the wake of the Washington, D.C. March for Life being canceled this year in light of the January 6 riot at the U.S. Capitol, the organizers of the West Coast walk said they “wrestled with the decision of whether to hold the Walk or create a virtual event.”

“Finally, we concluded that a public witness to the 63 million lives lost through abortion more than justified the risk—it made it our duty,” the organizers stated.

The walk happened on the day following the 48th anniversary of the U.S. Supreme Court’s Roe v. Wade decision that imposed abortion on demand across America. Walk co-chair Dolores Meehan said that it is as important today as ever to witness to life and the harm that abortion causes.

“Many people have voiced their concerns about holding this event given fears of [COVID] and political unrest. As the leaders of this local event, we prayerfully considered all of these concerns. We discerned that continuing to stand as a peaceful, public witness to the harm that abortion has inflicted on our society, is as important today as it has ever been.  We appreciate all of the pro-life warriors who supported us in prayer (from home) this year. Your contribution is essential and your prolife commitment is unquestionable,” she said.

Thanks for joining us Lila!

The day began with a Mass celebrated by Archbishop Salvatore Cordileone and 12 priests at St. Mary’s Cathedral. While the Archbishop had planned to celebrate the Mass outdoors in the plaza to respect current COVID-related prohibitions against indoor worship, a security threat from a leftist activist group a block away at the Chinese embassy forced the pro-lifers to gather inside the Church. “So it was a trade-off between extra step of caution versus keeping people safe cause of the threat of violence,” Cordileone told ABC 7.

Cordileone rebuked Speaker of the House Nancy Pelosi two days prior to the day of the Walk for claiming to be Catholic while supporting abortion.

“No Catholic in good conscience can favor abortion,” he said in a January 21 statement. “‘Right to choose’ is a smokescreen for perpetuating an entire industry that profits from one of the most heinous evils imaginable. Our land is soaked with the blood of the innocent, and it must stop.”

“That is why, as Catholics, we will continue to speak out on behalf of those who have no voice to speak for themselves and reach out to, comfort and support those who are suffering the scars of the abortion experience.  We will do so, until our land is finally rid of this despicable evil,” he added.

Around noon, pro-life walkers gathered at the Civic Center Plaza.

“We could not have a rally, but Walk chaplain Fr. Joseph Fessio, S.J. and the Rev. Clenard Childress spoke from Dolores’s pickup truck,” said event organizers.

Fr. Fessio dedicated the walk to Joe Scheidler, the grandfather of the pro-life movement, who passed away last week.

The Rev. Childress reminded the crowd of the importance of the event.

Meehan told attendees that they are there to witness to the truth that there is help available to those hurt by abortion.

“You are a beautiful remnant. You’re all standing in the breech for women who have been hurt by abortion, for all the kids who have died by abortion and for all those who need our help today,” she said.

The walk began about 12:30 p.m. with the walkers processing down Market Street. Organizers noticed that for the first time in 17 years there was no opposition. While the city is currently not giving permits for outdoor events, the San Francisco Police Department, nevertheless, provided an escort for the pro-life walkers.

Thanks for coming and see you next year!

Muntean said that no matter who has the political power, the Walk for Life West Coast will continue as long as abortion exists.

“We have Walked under three Popes and three Archbishops. Whoever is in the White House, whoever is in the Statehouse, whoever is in the doghouse, we will not falter or fail. We will lovingly and peacefully embrace our responsibilities to the littlest among us and to the women hurt by abortion. If this is what pro-lifers can do in this strange year all I can say is wait till next year,” she added.