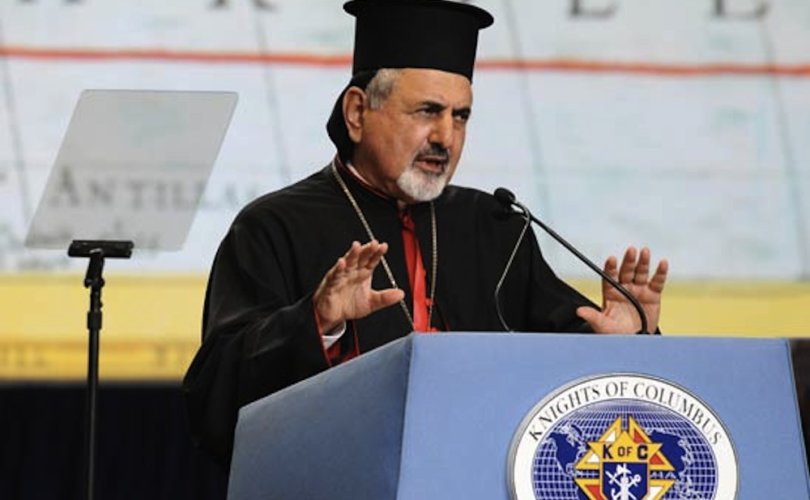 TORONTO, August 5, 2016 (LifeSiteNews) — Developed countries motivated by a need for oil and desire for profits are abandoning their principles to allow Islamic Jihadists to destroy Middle Eastern Christianity, the “cradle” of the faith.

So said the patriarch of the Syriac Catholic Church of Antioch, His Beatitude Ignatius Joseph III Younan, to the annual international gathering of Knights of Columbus here last week.

“We have to understand that totalitarianism based on Islamic creed is the worst among all systems of government. Yes, my friends, the very survival of Christians in the cradle of Christianity is quite in danger,” the patriarch said.

“Why shall we wonder at the rise of the Islamic State or its new ‘Caliphate,’ when these ‘allied rich countries’ – with among the most retrograde systems of government – continue to channel funding and weapons to terrorists spreading hatred and committing barbaric atrocities in the name of a religion?” (This was an obvious reference to Saudi Arabia, America’s chief ally in the Middle East, whose royal family supports radical Islamic believers in return for their endorsement of the Saud family’s rulership.)

In a straight-from-the-heart cry for help for the rapidly vanishing but 2,000-year-old Christian presence in Middle East, Patriarch Ignatius Joseph told the Knights that Saudi Arabia was funding Muslim jihadists to act out a new kind of murderous intolerance, and the Western democracies were letting them do it.

Quoting New York Times columnist Nicholas Kristof, the patriarch said, “For decades, Saudi Arabia has recklessly financed and promoted a harsh and intolerant Wahhabi version of Islam around the world in a way that is, quite predictably, producing terrorists.”

While the West practices separation of church and state in its own countries, he noted, it has been happy to support Middle Eastern regimes that unite Islamic intolerance with government and “do not hesitate to talk about ‘Muslim political parties,’ ‘Muslim Civilization’ and ‘Muslim World.’” Yet the West is unwilling to admit its own Christian roots or “mention anything reminding Europe of its history, which was for millennia permeated by Judeo-Christian values.”

The patriarch noted that the acceptance by the West of political Islam has been dangerously combined with support for Muslim rebels fighting to bring down  Syria, “a country that had one of the most secularized governments in the Middle East” and protected Christians and other minorities.

“We, the Church pastors, kept warning Westerners who pretended to have the right to interfere in Syria in the name of democracy, that fomenting violence would surely lead to terrible sectarian war because of the complex religious and ethnic diversity in Syria. We knew innocent people, primarily Christians and minorities, would suffer most.”

But Western countries ignored Church leaders and “today, Syria is the most dangerous spot on the planet. Half a million Christians are gone. More than 140 churches and ancient monasteries were desecrated, abandoned or completely destroyed. Two Archbishops were kidnapped three years ago. Their fate is still unknown. Clergy are slaughtered. Civilians used as human shields. Most of all, Islamic Wahabism, the worst among radical religious groups, is rising and spreading. It is as we warned.”

A similar Western policy of overthrowing secular, autocratic regimes has resulted in the expulsion, he charged, of “150,000, some 40 percent of all Christians still living in Iraq” two years ago.

The patriarch accused Western leaders of being “naïve and complicit” in this destruction, motivated by fear and greed. They have naively pretended that political Islam is peaceful while being afraid to act decisively when it is violent.

He recited the motto of the Muslim Brotherhood to underline the violence in Islam:

“Allah is our objective. The Prophet is our leader. The Qur'an is our law. Jihad is our way and dying for God is our ultimate desire.”

Patriarch Joseph Ignatius contrasted Western political leaders with the behavior of the Western church. “Church leaders and courageous Catholics from North America and Europe,” he said, “have visited those refugees to alleviate their dire conditions. Like the Good Samaritan, they emulate Jesus, sharing in their suffering, consoling, encouraging and reminding them that the Lord will never abandon them. Even in the worst living conditions, Christians are always messengers of the ‘Hope against all Hope.’”

But Christianity in the Middle East was now “an endangered species that could be wiped out for good. We have to understand that totalitarianism based on Islamic creed is the worst among all systems of government. Yes, my friends, the very survival of Christians in the cradle of Christianity is quite in danger.”

Though he did not offer concrete proposals in his prepared speech, the Crux news organization reported his verbatim comments suggested a change to national policy: “You can’t be allied with regimes that discriminate, or do not accept the religious freedom of non-Muslims. It’s not honest or sincere to be allied to such a regime and to say we have an annual report about religious freedom.” The U.S. government and Congress both produce annual reports on religious freedom.

Robert Spencer, the director of Jihad Watch, told LifeSiteNews: “The patriarch is right. The exhortations to violence against unbelievers come from the very heart of Islam — the Qur'an and the example of Muhammad. The Pope should heed his words and stop retailing politically correct fantasies.”

In related news, a new leader emerged among the militant Boko Haram Islamic terrorist group in Nigeria. Sbu Musab al-Barnawi reportedly told an Arab news agency his group would cease all attacks on mosques but “booby trap and blow up every church that we are able to reach, and kill all those we find from the citizens of the cross.”

But the Sunni Muslim theological center of Al Azhar in Cairo hailed Pope Francis for his comments made while flying home to Rome from the World Youth assembly in Poland denying Islam was a violent religion. “This statement reflects the pontiff's understanding of the true nature of Islam and its teachings of tolerance,” the center said.