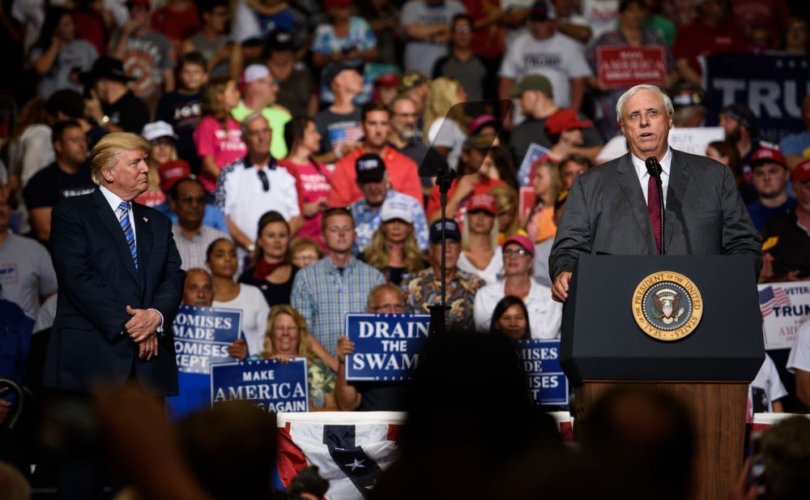 The news comes just days after the Republican-led legislature voted overwhelmingly to pass the measure, which prohibits abortion from the moment of implantation except to save the life of the mother or for babies conceived in rape or incest. Abortionists who violate the law could face the revocation of their medical license or felony charges and up to 10 years in prison.

Gov. Justice, who promised to “always defend the right to life for very unborn child,” affirmed Friday that the bill he signed will protect the lives of preborn West Virginians.

“It has come to my desk, and I want to tell you right now exactly, I have done exactly, what I said I would do, I signed it. It’s done. It is absolutely done,” Justice said, according to local CBS affiliate WOWKTV.

Doctors who break the law will have their licenses revoked. Anyone other than a licensed physician who commits an abortion will face felony charges and between three and 10 years in prison. Women who obtain illegal abortions will not be prosecuted.

As LifeSiteNews previously reported, the measure will only allow abortions when deemed “necessary” to save the life of the mother or, narrowly, in cases of rape or incest. Abortions committed in cases of rape or incest will be legal only if a woman reports the incident to law enforcement and obtains the abortion within the first eight weeks of pregnancy (14 weeks for minors).

The measure will clarify aspects of the state’s 173-year-old pro-life law, which predated West Virginia’s statehood and became dormant after the U.S. Supreme Court created a federal “right to abortion” in Roe v. Wade (1973). The law was reactivated in June after the Supreme Court overturned Roe in Dobbs v. Jackson Women’s Health Organization, but was blocked in July by a circuit judge who declared it would be “inequitable” to allow the old law to be enforced until it was amended.

RELATED: Here’s where abortion is banned or protected in post-Roe America, with interactive map

After weeks of deliberation, lawmakers drafted a bill that easily passed both the House and the Senate Tuesday.

Two pro-life Republican state senators who spoke with LifeSiteNews Thursday said the legislation they passed, and which has since been signed into law by the governor, is much stronger than an earlier draft that left too many loopholes.

State Sen. Robert Karnes told LifeSite the amended bill, which he said will end abortions in the state’s last abortion facility, is “[v]ery positive,” but added that legislators “still need to address several other items,” including prohibitions on advertising out-of-state abortion services.

State Sen. Patricia Rucker told LifeSite “[i]t is the intent of pro-life legislators in WV to continue to tighten our law and do all we can to support mothers and encourage adoption or support so mothers keep their children, in addition to making abortions rare.”

West Virginia has become the second state in the U.S. to successfully pass a nearly total statewide abortion ban following the Supreme Court’s rollback of Roe v. Wade after Indiana did so early last month.