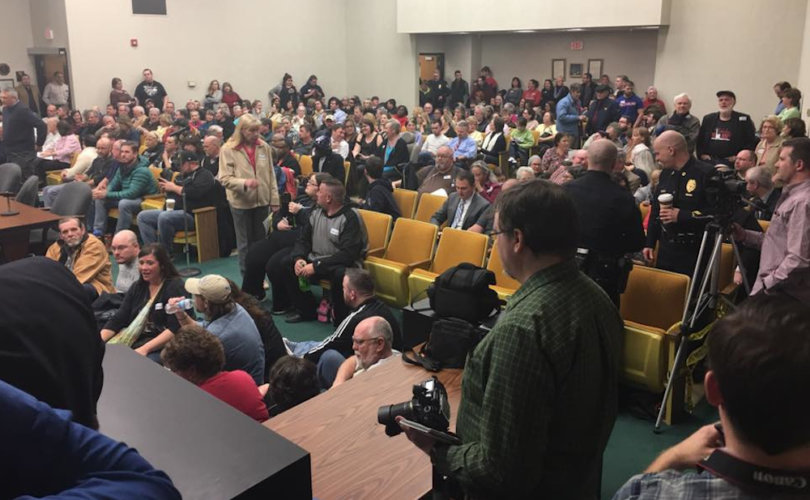 On the agenda was a city ordinance adding “gender identity,” “genetic information,” and “sexual orientation” to anti-discrimination laws covering employment and “public accommodations.”

With all the seats taken in council chambers, Christians and other morally concerned residents — who had only four days’ notice — sat shoulder to shoulder on the floor, crouched against the council table, leaned on the walls, and watched from the lobby.

It was the largest attendance at a city council meeting in more than 40 years, according to city clerk Connie Shaffer.

Attendees said it was a powerful example of grassroots activism. With little time to organize against the surprise transgender ordinance, area pastors, churches and pro-family organizations successfully garnered a massive turnout that ultimately swayed the council.

The meeting, which usually runs 30 minutes, lasted more than an hour.

Parkersburg Mayor Tom Joyce asked council to make the ordinance clearer, noting overwhelming attendee concerns about allowing the opposite sex in changing rooms, showers, locker rooms, and toilets. He noted the proposed wording stated that “public accommodations … does not include any accommodations which are in their nature private.”

Allen Whitt, Family Policy Council of West Virginia president and a resident of neighboring Jackson County, spoke against the proposed ordinance and recommended council “table” it.

In the end, Councilman Dave McCrady said it was clear that his proposed ordinance needed “fine-tuning” and made a motion to “table” it “for further discussion.” Tabling a proposed law simply means inaction for the time being.

The Family Policy Council of West Virginia summarized on Facebook, “With a whole lot a pressure by the good people of Parkersburg, we got a miracle.”

One observer commented that the meeting “shows the revolution is not inevitable.”

In perhaps the pinnacle of the meeting, Parkersburg resident Diane Wooten, a African-American woman, stood up to speak her mind to city council.

“I wanted you to know (that) as a black person, I take offense to all of those who are talking about the Civil Rights Movement, comparing homosexuals and interracial marriage,” she said.  “I take offense at that, because they are two different issues totally. Everyone thinks you ought to (equate) those two things. They are totally different.”

Councilman Jeff Fox said he wants the proposed law back before council soon.

The Family Policy Council warned that the proposed transgender law “could be brought back in the future, so we must watch them like a hawk.”

Andrew Schneider, executive director of the LGBTQ group “Fairness West Virginia,” said at the meeting that the transgender bathroom law sought to obey Jesus' command to “do unto others as you would have them do unto you.”

Parkersburg seems to be an exception to the wave of cities across the nation embracing transgender laws. Four dozen cities in 15 states have added “gender identity protections” since the Supreme Court's Obergefell decree Constitutionalized same-sex “marriage.”

A Republican-oriented city council in Columbus, Indiana, unanimously passed a transgender-enabling law because, as Mayor Jim Lienhoop explained, “Republicans don't speak with one voice on this issue.”

Wheeling, West Virginia, passed a similar “anti-discrimination” ordinance. Democratic Mayor Glenn Elliott said it was a financial decision. “Those of us in the community may not all agree on its morals,” but “not open for debate is that it's good for business.”

Some conservatives say the voice of reason has been bullied into silence by those pushing the gay agenda.