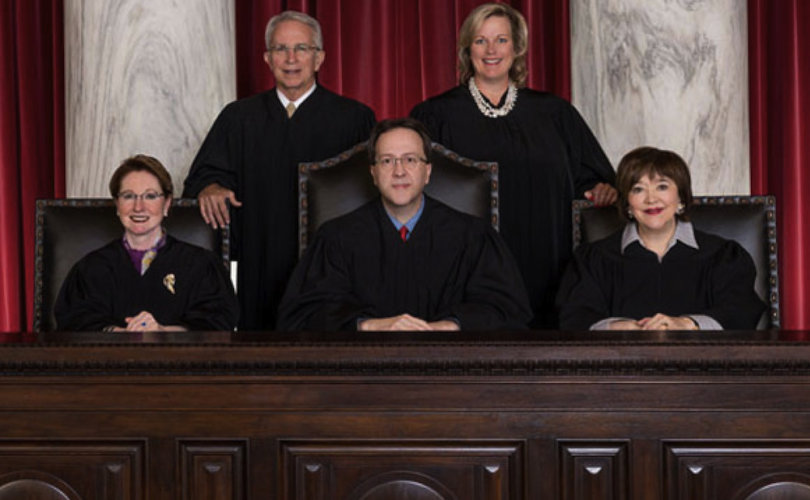 CHARLESTON, West Virginia, May 16, 2017 (LifeSiteNews) — The West Virginia Supreme Court has ruled that laws against discrimination on the basis of a person's sex do not include “sexual orientation.”

The 3-2 decision upholds an originalist view of legislation whereby the judicial system interprets the intent of law and does not legislate from the bench.

Chief Justice Allen H. Loughry II delivered the ruling Saturday, which determined that “where the language of a statute is clear and without ambiguity, the plain meaning is to be accepted.” The ruling takes a strict constructionist view of law, which strikes at the heart of attempts to expand old laws to create a special class of “hate crimes.”

At issue was a 1987 state civil rights law (WV Code 61-6-21b) that prohibited discrimination on the basis of various characteristics, including “sex.”

“The West Virginia Supreme Court’s decision yesterday was a victory for common sense,” the Family Council of West Virginia (FCWV) posted on Facebook. “It will halt some of the biological heresy that left-leaning legislators have been attempting to pass that would give legal status to more than two genders.”

“George Orwell’s dystopian novel titled ‘1984’ depicts a world full of fear and intimidation where the government can permanently redact its citizens for merely thinking the wrong thing,” the FCWV continued. “Congress was frighteningly misguided when they codified the concept that some illegal acts, now labeled ‘hate crimes,’ should be punished more severely because of what the criminal may have been thinking at the time. This politically correct Group-Think has always been wrong-headed, and threatens commonsense liberties of West Virginia citizens exactly the same way that Orwell’s thought police punished people in his novel.”

Butler accepted his punishment for punching the men but appealed the special civil rights discrimination convictions.

That the 1987 law intended “sex” discrimination to mean the binary genders male and female was not disputed. The State instead argued that the court should disregard the “literal sense of the words” in the statute and apply “sex” to include sexual orientation.

In the end, the state Supreme Court affirmed a circuit court’s ruling that the 1987 anti-discrimination law was “unambiguous.” Noting that sex and sexual orientation have quite different meanings, the court verified that justices are “bound to apply the law as it stands” and “cannot expand the word ‘sex’ to include ‘sexual orientation’ within West Virginia Code § 61-6-21(b).”

The majority opinion also included references that tempered its ruling as one against judicial activism and not against anti-discrimination laws:

This West Virginia ruling is the exact opposite of a Chicago appeals court ruling on April 4 that Title VII of the 1964 Civil Rights Act, which bans discrimination on the basis of race, color, religion, sex, and national origin, also covers homosexuality.