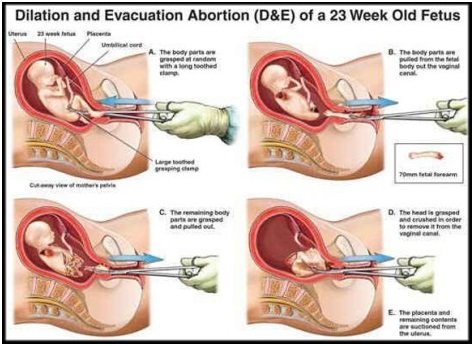 A chart shows how D&E dismemberment abortions are done.

CHARLESTON, West Virginia (LifeSiteNews) — The West Virginia House of Delegates voted 81-18 on Tuesday to ban abortions past 15 weeks of pregnancy, a policy whose fate is slated to be decided by the U.S. Supreme Court in the coming months.

The Associated Press reported that the bill would narrow the state’s current legal abortion window by five weeks and make exceptions for medical emergencies or severe fetal abnormalities, but not for rape or incest.

“If it was up to me, we would ban [abortion] outright,” said Republican state Delegate Adam Burkhammer on the House floor. “But that’s not the bill before us — we’re taking steps in a positive direction.”

Republicans in Arizona and Florida have recently advanced their own 15-week abortion bans, a cutoff point that is the subject of the currently-pending Supreme Court case Dobbs v. Jackson Women’s Health Organization. The Court heard oral arguments in December concerning Mississippi’s similar law.

That ruling is expected to at the very least determine whether or not 15-week abortion bans can take effect at the state level, with many hoping the Court goes farther and finally overturns Roe v. Wade, the infamous 1973 precedent currently forcing the states to allow most abortions. Twenty-two states currently have laws on the books that would effectively ban abortion within their borders upon Roe’s fall, from pre-Roe abortion bans currently not in effect to “trigger laws” designed not to take effect until the Supreme Court overturns Roe.

Oral arguments in Dobbs left pro-lifers cautiously optimistic, with at least five justices expressing some degree of skepticism toward Roe’s legal merit and none of former President Donald Trump’s three most recent additions to the Court signaling sympathy for the ruling. Some conservatives, however, cautioned that cross-examination does not capture all of the factors that go into justices’ decision-making process, leaving open the possibility of a split decision upholding the Mississippi law without ending Roe.