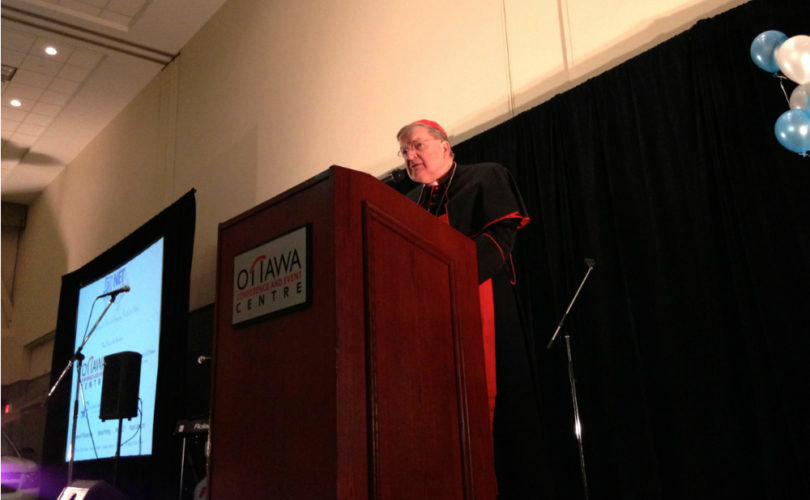 OTTAWA, June 5, 2015 (LifeSiteNews) — Addressing the crisis of culture during his first visit to Canada’s national capital, Cardinal Raymond Burke stressed that defending human life and promoting natural marriage is the foundation of any truly human culture. The West’s preoccupation with death and destruction will not be “transform[ed]” until the “truth about the conjugal union [is proclaimed] in its fullness,” he said.

“The defense and promotion of human life and of marriage and the family is at the foundation of a Christian culture, and indeed, of any viable human culture,” he told about 330 people gathered at Ottawa’s Conference and Event Center to celebrate NET Canada’s 20th anniversary.

The National Evangelization Teams (NET) exist to challenge young Catholics to love Christ and embrace the Life of the Church through retreats consisting of personal testimonies, skits, and music led by small groups of young people traveling coast-to-coast.

In his talk, the cardinal praised NET, saying it is “surely a steadfast and brilliant agent of hope and encouragement to our youth who understand in a particularly poignant way the challenge of living in Christ in our times.”

Burke, recognized by pro-life-and-family leaders worldwide as one of the Church’s foremost defenders of truth, morality, and authentic Christianity, laid out a number of “most grievous moral evils” that constitute what he called the “disordered moral state in which our culture finds itself.”

“For instance, the wholesale murder of the unborn in the womb, justified as the exercise of the so-called ‘right’ of the mother to choose whether to bring to term the baby she has conceived. More and more too, we face the abhorrent practices of the artificial generation of human life and then its destruction at the embryonic stage of development, which are justified as the means to find supposed cures for crippling or deadly diseases.”

He mentioned the direct and intentional killing of the weak and the elderly through euthanasia and assisted suicide, which he said is falsely “justified as ‘respect’ for the quality of their lives.”

Burke topped his list with the attack on marriage from various ideological groups.

“One necessarily thinks too of the ever advancing agenda of those who want to redefine marriage and family life to include the unnatural sexual activity of two persons of the same sex, which is justified as tolerance of so-called ‘alternative forms’ of human sexuality, as if there were a true form of human sexuality other than that intended by God, our Creator and Redeemer, as he has written it in our body and soul.”

Burke called the above “great evils which beset the world in our day,” adding that they indicate a way of living “as if God did not exist.”

“They are a manifestation of sin, [which] at its root is pride – the pride of man who fails to recognize that all that he is and has comes from the hand of God who has created us and has redeemed us from the sin of our first parents,” he said.

Despite the bleakness of the West’s moral landscape, Cardinal Burke said Christians “must be full of hope and encouragement in our mission of building a strong Christian culture in our homes, our communities, and our nations.”

He stressed that “holiness of life,” no matter what situation the Christian finds him or herself in, is the real program of the new evangelization and the only answer to combatting the problems.

Burke elaborated on ‘holiness of life’ with respect to living out the “truth of human sexuality.”

He called practicing the virtues of purity, chastity, and modesty as “the living of the truth regarding human sexuality” and therefore as connected to the “practice of justice.”

“What sense does it make for us to speak of our love of God and of our neighbor when we do not practice justice, when we do not respect the order which God has placed in nature and in our hearts, in our relationships with God and our neighbor?” he asked.

He proceeded to layout an understanding of Catholic sexual morality based on the recognition of the purpose of the sexual act, which he said has been created by God to be legitimately used in marriage for the sake of bringing new life into the world.

“The respect for human life is related essentially to the respect for the integrity of marriage and the family as they come to us from God. The attack on the innocent and defenseless life of the unborn, for example, has its origin in an erroneous view of human sexuality, which attempts to eliminate by mechanical or chemical means the essentially procreative nature of the conjugal act.”

Continued Burke: “The error maintains that the artificially altered act retains its integrity. The claim is that the act remains unitive and loving, even though the procreative nature of the act has been radically violated. In fact, it is not unitive, for one or both of the partners withholds an essential part of the gift-of-self, which is the essence of the conjugal union. The so-called ‘contraceptive mentality’ is essentially anti-life. Many forms of what is called contraception are in fact abortifacient, that is, they destroy a life which has already been conceived, has already begun.”

Burke said that men, women, and society itself suffer destruction when the real purpose of the sexual act becomes lost.

“The manipulation of the conjugal act, as Pope Paul VI has courageously observed, has led to many forms of violence in marriage and family life through the spread of the contraceptive mentality, especially among the young. Human sexuality is no longer seen as the gift of God which draws a man and a woman together in a bond of lifelong and faithful love, crowned by the gift of new human life, but rather, as a tool for personal gratification.”

“Once sexual union is no longer seen to be — by its very nature — procreative, human sexuality is abused in many ways that are profoundly harmful, and indeed, destructive of individuals and of society itself. One has only to think of the devastation which is daily wrought in our world by the multi-billion-dollar industry of pornography,” he said.

Burke emphasized that a return to the 1968 papal encyclical Humanae Vitae is necessary to help promote the Church’s vision for human sexuality. He referred to Pope Benedict XVI who he said “made it clear that the teaching in Humanae Vitae is not simply a matter of individual morality.”

“Fundamental to the transformation of Western culture is the proclamation of the truth about the conjugal union in its fullness and the correction of the contraceptive thinking which fears life, which fears procreation,” he said.

He called the restoration of the respect for the integrity of the conjugal act “essential” to the future of Western culture and the advancement of a culture of life.

Burke went on to speak about the role of conscience as the “infallible guide” to holiness of life, but only a conscience that is “trained to listen to God's voice alone, and to reject what would weaken or compromise in any way our witness to the truth in which he alone instructs us through the Church, through our daily prayer and devotion, through our knowledge of the Saints with whom we have communion in the Church, and through our study of official Church teaching.”

“Today, we must be attentive to a false notion of conscience which would actually use the conscience to justify sinful acts, the betrayal of our call to holiness,” he said.

Concluding his talk, Burke stated that holiness of life demands a daily martyrdom of “public witness to our faith,” even if that witness demands the “shedding of blood.”

“Surely, we face in our thoroughly secularized culture-of-fear some challenge to our faith in the face of the ever advancing anti-life and anti-family agenda of many who are in power in our culture.”

“The hostility, and more pervasively, the indifference to the beliefs we hold most dear, temps us to discouragement and even to avoid the more public witness to our faith. But, the martyrdom to which we are called, and for which we are consecrated and fortified by the sacraments of baptism and confirmation, requires us to offer tirelessly our witness, confident that God will bring forth the good fruit,” he said.

“Given the breakdown in family life and the wholesale attack on innocent and defenseless human lives, and the violation of the integrity of the union of marriage in our society, the call to the martyrdom of witness is even more urgent,” he concluded.