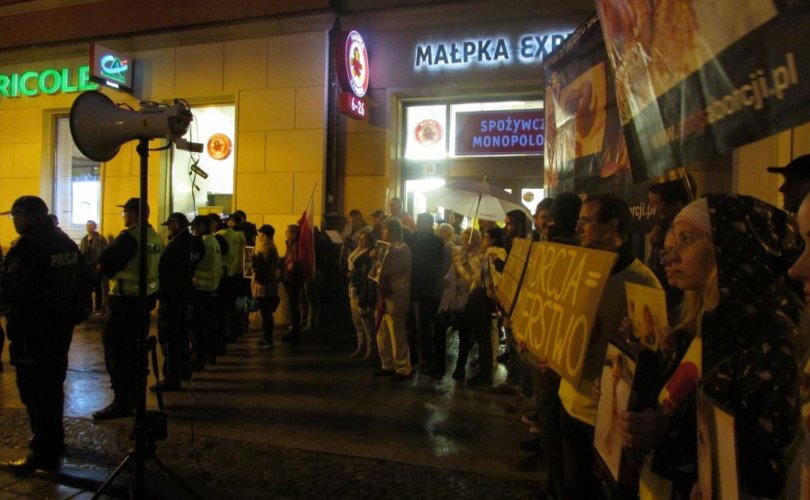 Pro-life activists in Wrocław run a demonstration to counter the pro-abortion 'Black Protests.'Right to Life Foundation

WARSAW, Poland, October 5, 2016 (LifeSiteNews) – The most recent abortion battle in Poland took the form of dueling protests: the pro-abortion Black vs. the pro-life White.

Highly promoted by the English-speaking media, the October “Black Protest” was hardly a unified manifestation for abortion on demand. The demonstration contains anti-government forces ranging from radical feminists to mainstream politicians who lost the last election. Some protestors did not want to see the current law changed at all. Some supported abortion on demand. And some simply used the occasion to attack the ruling party for purely political reasons. The pro-life side’s actions were largely ignored.

The current Polish abortion law, passed in 1993, is often misrepresented by the media and called “very restrictive.” When the woman's life or health is endangered, there are no legal limits as to the time when it can be performed. When the pregnancy is a result of a criminal act, abortion is permitted until the 12th week. Finally, abortion is legal when a doctor believes that the baby has a severe and irreversible handicap or an incurable and life-threatening disease. In such situations, the procedure is legal until the baby is viable. Viability is not precisely defined, but there seems to be general consensus that after 24 weeks the abortion should be considered illegal.

Unfortunately, Polish law allows for the most barbaric abortions. According to official statistics, between 1,000 and 2,000 abortions took place in Poland in 2014. Polish pro-lifers explain that more than 95 percent of them occurred because prenatal testing led the parents to believe the unborn child was sick or handicapped, in most cases with Down’s or Turner’s syndrome. Those abortions are performed when the unborn child is developed, in other words after the 20th week of gestation. According to British data, more than 10 percent of late abortions end in the live birth of a child who is then left to die unattended.

Many members of the Parliament understood the context of late-term abortions when, at the end of September, the lower house of Parliament voted 267-154 to continue the legislative process on a “Stop Abortion” measure and rejected a “Save Women” bill proposing abortion on demand by a margin of 230-173. The pro-life bill would completely ban abortions, only allowing for medical intervention to save a mother’s life.

Among the members of Parliament speaking to defend the children with Down’s syndrome were politicians who have children with this condition. Anna Milczanowska from the ruling Law and Justice Party said during the abortion debate, “It’s not suffering, it’s not a cross to bear, it’s love.” Vice Minister of Justice Patryk Jaki wrote that the abortion debate is about the right to life for children such as his son, proudly publishing his picture.

Unfortunately, many protestors understand neither the current law nor the proposed abortion ban, nor what really is at stake. Also, attacks on the government and the Church are misguided since they did not propose it, but rather a group of pro-life citizens.

On October 1, a group of radical feminists and a few parties which lost in the 2015 elections protested in front of the lower house of Parliament. The left-leaning Civic Platform, the socialists and the communists, who did not win seats in the Parliament, used the occasion to attack the ruling Law and Justice party.

The crowd wearing black protested under the slogan, “Enough joking.” But for the right wing media it become a laughing matter, in part due to its disunity. The Civic Platform MP Joanna Mucha, as a part of the political establishment, was booed during her speech. Joanna Scheuring-Wielgus from the liberal party Modern surprisingly yelled, “Enough of the dictatorship of women!” She corrected herself after someone from the crowd cried, “of men.” But then, she doubled down on Twitter, explaining that she really meant “Enough of the dictatorship of women”, and named some women from the ruling party.

During the demonstration, there were the usual slogans, such as “Freedom, Equality, Abortion on demand,” vulgar messages such as “F*** Off Fanatics!” and obscene posters with the middle finger, mostly attacking the Catholic Church and the government. The “Black Protest” was supported by the staunchly pro-abortion newspaper Gazeta Wyborcza, and a few celebrities. One of them was Nergal, the leader of the metal group Behemoth, known for his promotion of Satanism. Nergal publicly discussed participating in group sex and his need for pornography.

According to one commentator, black is an appropriate color for a proud Satanist, but also for another reason. “Wearing black for abortion is fitting since it’s murder and requires mourning,” commented Polish celebrity and journalist Wojciech Cejrowski.

October 3 marked the second wave of pro-abortion “Black Protests” in Poland, mostly in Warsaw and few other cities. As wpolityce.pl pointed out their size was highly overblown. Before the protest even started, the British left-wing newspaper The Independent wrote, “Poland abortion strike: Nearly 6 million expected to protest restrictive laws.” The headline was quickly picked up by British Metro, writing that 6 million “are protesting.” To put this number in perspective, it would mean that nearly one in six of the country’s entire population was protesting; the U.S. equivalent would be more than 50 million people protesting! When Polish Internet users mocked the number, Metro changed the headline to “thousands.” According to police estimations, there were 17,000 protestors in Warsaw, and 98,000 in the whole country.

The demonstration seems to be losing its own supporters. As wpolityce.pl reported, Polish actress Maja Bohosiewicz, who initially supported the Black protest, backed down after reading the proposed abortion draft. She admitted on Facebook that she had bought into many lies about it, thinking that it included a ban for prenatal testing, or that it would put doctors in jail for saving a woman’s life.

As part of the protest, Polish women were encouraged not to go to work on Monday, an idea borrowed from Iceland’s feminists in 1975. The goal of the Icelandic strike was to protest the wage discrepancy and unfair employment practices, not abortion. Since, as Global Nonviolent Action database wrote, as many as 90 percent of Icelandic women participated in the protest, it had an impact on this tiny island. But what worked decades ago with a totally different goal will have no impact in Poland. Polish feminists will not bring the economy to collapse since they tend to either work in public universities or remotely from home. A large number are college and high school students who are very rarely employed at all.

What’s more, the pro-life side dominates in Poland. It gathered twice as many signatures for their “Stop Abortion” bill than the pro-abortion “Save Women” bill. Also, according to an IBRIS survey, almost 58 percent of women support the abortion ban. The latest CBOS poll from March 2016 showed that 66 percent of Poles answered “yes” to the following question: “Do you think human life should be protected always and in all circumstances from the moment of conception till natural death?”

As a result, the pro-life side is not intimidated by the pro-abortion demonstrations. The Right to Life Foundation counterattacked the Black protests with large posters of aborted babies. The same tactic used by the Life and Family Foundation chased off the pro-abortion demonstration in Toruń. “The White Protest” will last for nine days, with a daily prayer at the Divine Mercy Chaplet at 3pm. People are encouraged to wear white and post their pictures online. There are several pro-life projects on Facebook and Twitter, such as #BiałyProtest (White Protest), #KobietyZaZyciem (Women for Life), #PracujeWPoniedzialek (I work on Monday). On Monday, during the protests, Polish public television showed the anti-abortion movie “Eugenics.” Special Masses for the abortion ban were celebrated that day as well. During the homily, Archbishop Henryk Hoser of Warszawa-Praga said about the abortion debate: “Everything seems to be important: drama, expectations, emotions. Only there is no baby, because the child has no right to live.”