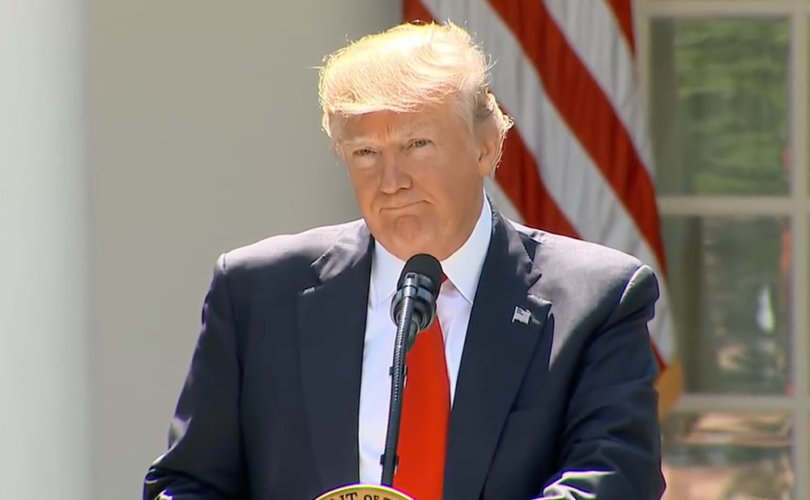 WASHINGTON, D.C., April 2, 2020 (LifeSiteNews) — The White House Correspondents’ Association (WHCA) has announced that it has removed the White House briefing room access of One America News Network (OAN), the news agency that earlier this week highlighted the number of abortions every day in America during a press conference on the coronavirus pandemic.

Politico reports that the WHCA sent a statement out by email yesterday advising that an unnamed news outlet has been removed from its rotation of news organizations that get seats in the White House briefing room, after it allegedly twice violated temporary “social distancing” rules. These rules include not allowing journalists to stand along the sides or back of the room.

“We are writing to inform you that the WHCA Board has voted this evening to remove a news outlet from the rotation for a seat in the briefing room,” it continued. “We did this because a reporter for this outlet twice attended press briefings in contravention of this policy. We do not take this action lightly. This is a matter of public safety.”

The statement did not name OAN, but Chanel Rion – the journalist who asked Trump about abortion earlier this week – was seen standing when asking a question yesterday and an OAN anchor responded to the news on Twitter.

BREAKING: The @WHCA has voted to remove @OANN from seat rotation in the White House briefing room: “We did this because a reporter for this outlet twice attended press briefings in contravention of this policy.” pic.twitter.com/ldqEsFiFWz

According to a report in the Los Angeles Times, Rion was asked by a member of the WHCA to leave Tuesday’s press briefing as she wasn’t scheduled in their rotation, but she refused, saying she was there “as a guest of Stephanie Grisham,” the White House press secretary.

The WHCA is an organization of journalists and other media staff and is independent of the White House, but is responsible for handling access to the White House press briefing rooms. The WHCA’s current president is an ABC News correspondent and its vice president is an Associated Press reporter. Staff from the New York Times, CBS, Politico and the Daily Mail are also represented on its nine person board.

After the news broke yesterday Arizona Rep. Paul Gosar tweeted in support of OAN, saying: “It’s Trump’s briefing room. He could tell the press Corp to pound salt.  #FakeNews media doing what it does. If you can’t beat the competition ban them. Leave @OANN @ChanelRion alone!”

It’s Trump’s briefing room. He could tell the press Corp to pound salt. #FakeNews media doing what it does. If you can’t beat the competition ban them.

While much of the mainstream media have been critical of Trump’s handling of the coronavirus pandemic, OAN has consistently praised his handling of the crisis and Trump has openly thanked them for their “fair” coverage.

Trump’s approval ratings for his handling of the crisis have continued to rise, while a growing chorus of media outlets are complaining that the press should, in the words of the Washington Post’s Margaret Sullivan, “stop live-broadcasting Trump’s dangerous, destructive coronavirus briefings.”

Readers can visit LifeSite’s homepage at 5:00 p.m. EST each day for a link to the day’s live-stream. Press conferences are scheduled to begin then but they often begin later than that.