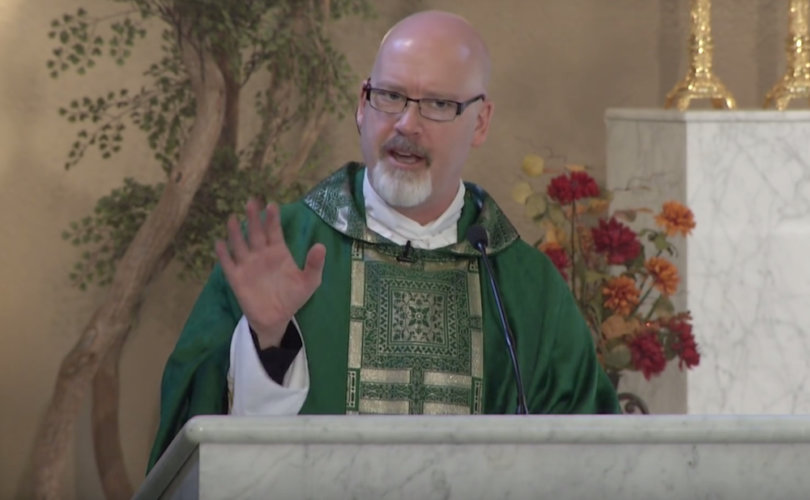 PHOENIX, Arizona, October 30, 2017 (LifeSiteNews) – Just like the Pharisees tried to trap Jesus when they asked him about paying taxes to Caesar, so do self-righteous people try to trap Catholics when they ask them if they believe in gay ‘marriage,’ a U.S. priest said in a homily last weekend.

Father John Lankeit of the Diocese of Phoenix said that just as Jesus went to the heart of the matter when he addressed his assailants, so too must Catholics go to the heart of marriage as created by God when answering questions on gay ‘marriage.’

“When a Catholic is asked, ‘do you believe in gay “marriage,”’ he or she will be labeled a ‘bigot’ if they say ‘no,’ or a dissenting Catholic if they say ‘yes.’ It’s a no-win situation precisely because the question itself is based on a false understanding of marriage,” Fr. Lankeit said during the October 22 homily at Ss. Simon and Jude Cathedral in Phoenix.

“So, the distortion must first be exposed before an accurate answer can be given to the question,” he said.

The priest has offered fervent defense of Church principles in homilies in the past, including telling Catholics last fall they could put their soul in grave danger should they support a pro-abortion political candidate.

Father Lankeit said just as Jesus used the image on the coin to point out what belonged to Caesar, Catholics must point out that men and women are created in the “image of God” and therefore belong to God. Catholics must furthermore point out that God designed marriage to be an icon that “most closely reveals the very identity of God as the most Holy Trinity.”

It’s no coincidence, he said, that the natural generation of a child – a third person – flowing from the natural, physical act of love between a man and a woman, given to each other by God in sacramental marriage, mirrors the fact that the Holy Spirit is Himself the personification of the love — the third person in the Holy Trinity — the actual love of God, the Father, for His Son, and the Son for His father.

“Do you think it is an accident that marriage is the icon – the living icon – placed at the center of human society, that most closely reveals the very identity of God as the most Holy Trinity?” Father Lankeit asked. “And does it surprise you that the devil’s most consistent point of attack against humanity is his attack on the family?”

He said that the State cannot redefine marriage because the State did not define marriage in the first place. God created male and female in his own image and likeness and united them in marriage after the icon of God’s own Trinitarian love.

The priest said that it is not surprising that most of the dissent today from Catholic teaching centers on her teachings on sexuality because “our sexuality speaks deeply of who we are and whose we are.”

The “worldly gospel” that opposes God and the way he created men and women and marriage has “not only been found wanting, it has unleashed hell on earth.”

“When we reject God, we begin to play God,” he said. “And considering how inept we each are at managing our own lives, how incapable we are of maintaining any consistent peace and harmony even within ourselves, how well do we really think we’re going to do in God’s role?”

Father Lankeit quoted Sister Lucia, the eldest of the three Fatima children, who said that the final battle with Satan would be on marriage and the family.

The priest said that the way Jesus handled his assailants has much to teach his followers today how to defend marriage and the family.

“We repay to God what belongs to God not through rebellion and disobedience, but rather by the abandonment of our lives and our very future into His hands with trust and obedience,” he said.

“Since we ourselves belong to God, it’s high time we repaid to Him what belongs to him,” Father Lankeit concluded, “through our faith, through our hope, through our love and through our obedience to him.”