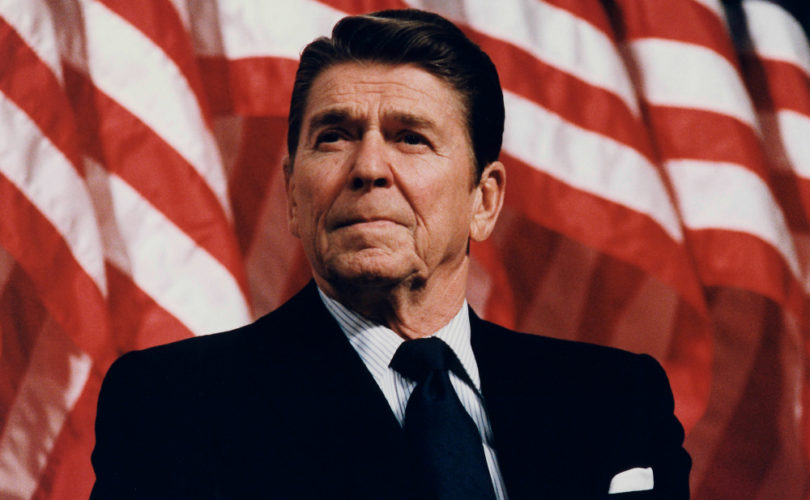 A recent poll named Ronald Reagan the best president since World War II. Even today, 15 years after his death on what would be his 104th birthday, the Gipper casts a long shadow over his successors in both parties, and those who wish to succeed him in his own. As politicians position themselves as “the next Reagan,” it's worthwhile to remember the vision that made Reagan who he was. That is precisely the service rendered by Dr. Paul G. Kengor's 11 Principles of a Reagan Conservative.

The fact that Kengor, a professor of political science and executive director of The Center for Vision and Values at Grove City College, can extract 11 clear principles from Reagan's speeches shows one difference between Reagan and others in high office: Unlike all his successors, Reagan had a clear view of government and was not afraid to articulate it. As Kengor documents, that moral outlook affirmed faith, family, marriage, freedom, and the unborn.

Reagan was the most outspoken of all presidents on his affirmation that life begins at conception and should be legally protected from that moment forward.

His belief in the sanctity of life was long and personal. He saved 77 people from drowning as a lifeguard along the beaches of Rock River in Dixon, Illinois. Reagan and first wife Jane Wyman lost a daughter, Christine, after a premature birth. He understood the issue of saving human life philosophically, constitutionally, and viscerally.

He ignored his advisers views to speak about his firm commitment to life on numerous occasions while commander-in-chief.

“I believe no challenge is more important to the character of America than restoring the right to life to all human beings,” Reagan said. “Without that right, no other rights have meaning.”

In his 1986 State of the Union Address, Reagan called abortion the “wound in our national conscience. America will never be whole as long as the right to life granted by our Creator is denied to the unborn.”

However, his support for the right to life did not confine itself to official functions. Reagan addressed the March for Life every year of his second term, 1985-88, and wrote a pro-life book – Abortion and the Conscience of the Nation – from the Oval Office.

The New York Times, in return, accused Reagan of reducing women to “bondage” and depriving them of “basic liberty.” Plus ça change, plus c'est la même chose.

As an insightful thinker, there was not a stratagem that would advance the pro-life cause that Reagan rejected. During his presidency, Ronald Reagan spoke about fetal pain and “personhood.” In his first presidential debate with Walter Mondale in 1984, Reagan mentioned the prototype for Unborn Victims of Violence Act, which would not become federal law until 20 years later (and rarely be enforced in the next 10). He implemented the Mexico City policy, depriving foreign abortionists of U.S. taxpayer funding.

To be sure, there were disappointments, for Reagan and his pro-life followers. To fulfill a campaign promise to name the first female Supreme Court justice, Reagan selected Sandra Day O'Connor, whose voting record in the Arizona state Senate and as a lower court judge indicated she would support abortion. The head of The Conservative Caucus, Howard Phillips, testified against her, but the Republican-controlled Senate confirmed her, and O'Connor became a dependable vote for Roe v. Wade throughout her tenure on the High Court.

After two pro-life appointments – naming William Rehnquist as Chief Justice and appointing Antonin Scalia – his nomination of Robert Bork unleashed the most vicious and personally negative campaign in modern Senate history…to that time. Ultimately, he settled on Anthony Kennedy, a judge Reagan's lawyers warned held a positive view of Roe v Wade. Ultimately, the swing vote would reaffirm Roe in 1992.

If Reagan opposed abortion, in part it is because he so cherished the notion of family. “It is difficult to overstate the profound importance of the family – mother, father, children – to Ronald Reagan's understanding of America and of conservatism,” Kengor writes.

Reagan called the family “the most important unit of society” and “the social foundation of the state itself.” It is in the home that children are “taught the moral values and traditions that give order and stability to our lives and to society as a whole” – a view he shared, ironically, with Karl Marx.

As president, he asked for the creation of a report to translate family interests into policy. The result – The Family: Preserving America's Future, which was guided by Gary Bauer – was issued in December 1986.

Given his steadfast support of the traditional family, it takes little imagination to guess where he would have fallen on the issue of redefining marriage. “Ronald Reagan certainly never addressed the issue of 'gay marriage,' which was unthinkable in his time, though he did remark (disapprovingly) on homosexuality,” Kengor wrote. “Any politician advocating such a thing in Reagan's time – whether a Democrat or Republican, a conservative or liberal or progressive – would have been hauled off to a lunatic asylum as a public menace.”

But Reagan did say that the definition of family “must withstand the trends of lifestyle and legislation.”

…As did Reagan. Even in his day, 30 years ago, Reagan seemed like – and was dismissed as – old fashioned and out-of-step with the New Morality. Once, during AIDS Awareness and Prevention Month, he called on Americans to “place sexuality in the context of marriage, family, commitment, and maturity.”

While he was personally tolerant of homosexuals – he phoned Rock Hudson with heartfelt sorrow when he learned the idol was dying of AIDS – President Reagan maintained the traditional view that homosexual behavior is bad for cultures and individuals. In March 1980, Reagan told the Los Angeles Times that homosexuality is “an alternative life style which I do not believe society can condone, nor can I.” When the reporter, Robert Scheer, asked for clarification, Reagan continued, “You could find that in the Bible it says that in the eyes of the Lord, this is an abomination.”

Faith in God, the redemption offered by Jesus Christ, and inescapable Divine Providence brought direction and comfort to the 40th president. This is territory Kengor knows well, having written an entire volume on Reagan's religious views, God and Reagan: A Spiritual Life. His present volume includes a beautiful letter Reagan sent as governor of California to the mother of a handicapped child, asking that she remain steadfast in her belief that God has a plan for her and will use her trials to refine her. “It takes a lot of fire and heat to make a piece of steel,” he wrote.

In an age when modern presidents are maligning faith and turning a blind eye to the suffering of the handicapped, Reagan's words ring louder than ever.

His affirmation of faith and life helped cement his conservative views. Kengor notes that Reagan followed Russell Kirk's notion of “ordered liberty,” which holds that the primary level of government should be self-government. Only when that fails does individual freedom yield to the principle of subsidiarity, that every decision be made by the level of government closest to the individuals affected (and also most accountable to the people). A nation animated by faith in God and adherence to the Ten Commandments can coexist with the limited government envisioned by the Founding Fathers; a nation given to caprice will in time prove incapable of governing itself.

This fascinating, if quite short, book also dedicates chapters to Reagan's belief in limited government, anti-Communism, and a strong national defense – with an emphasis on defense. Reagan hoped his top goal, the Strategic Defense Initiative (which liberals derided as “Star Wars”), a purely defensive missile shield, would rid the world of the threat of nuclear war.

One may quibble here and there with the book. For example, Kengor seems to channel Cardinal Roger Mahony more than Ronald Reagan on illegal immigration. The 1986 amnesty deal Reagan signed was supposed to seal the border and prevent all future amnesty proclamations. Reagan's primary immigration concern was allowing refugees from the Soviet bloc to defect. Obviously, no comparable threat exists in the Western hemisphere today.

The book contains more than enough benefits to outweigh its drawbacks. The foreword by Reagan's Attorney General, Ed Meese, is worth the price alone. An appendix contains many of The Great Communicator's greatest speeches: the 1964 Goldwater campaign speech that launched his political career, his farewell address 25 years later, and a photostatic copy of his “Evil Empire” speech showing Reagan's handwritten notes and emendations.

Today, politicians envy Reagan's legacy. The last Republican president (and probably the last president of either party) regarded as a success, Reagan's record did not come from a void but from the clearly articulated philosophy that guided him for decades in public life.

In the 26 years since he left the White House, Reagan's party has tried two terms of “national greatness conservatism” and a failed campaign on behalf of entrepreneurial conservatism mute on social issues. If they hope to recover, his mantle, they could begin by rededicating themselves to his philosophy – including its unequivocal support for the unborn.

You can purchase the book here.