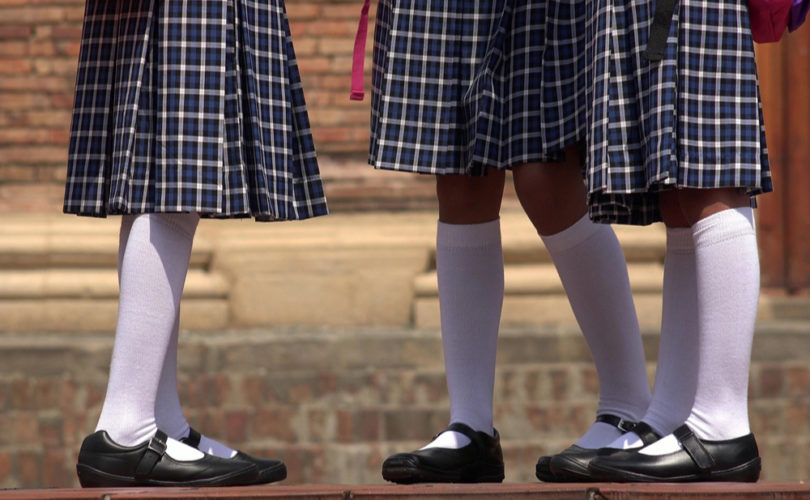 BURLINGTON, Ontario, April 22, 2022 (LifeSiteNews) — The proposal to raise the homosexual “pride” flag outside Ontario Catholic schools pales in comparison to what activists really want: to turn the schools into “safe spaces” where Catholic teaching on marriage and sexuality is forbidden.

“Raising the flag is never going to be enough,” stated Dr. Alexandra Power, one delegate who spoke during Tuesday night’s contentious meeting of the Halton School Board to discuss new LGBT measures for the region’s Catholic schools. “But it has to be the start for right now.”

Student Teia Bodner, who was accompanied by her mother Michela to the online meeting, indicated that both indoctrination into LGBT terminology is on the wish list and that she believes it is in concert with Catholic doctrine:

School boards must lead, encourage and respect all community stakeholders by holding space for difficult but courageous conversations at all levels of the board. It means promoting the understanding of what an Ally is and what personal pronouns mean. This means committees, information sessions, and data collection. It means safe spaces. It means inclusive books in our libraries. It means digging in and doing honest work. It means honest and open Professional Development for ALL STAFF to empower them with credible information so that the 2SLGBTQ+ communities know that we love and support them, as they are Children of God. This is 2021. Let's practice what we preach. Follow the Catholic Social Teachings. Support this motion. [Emphasis added.]

Power went on to say that raising the rainbow flag and creating “signs for our teachers to show our students that they have a safe place to be themselves” will not be enough “until every child, adult, person amongst us feels safe being their own genuine self.”

Apparently equating anything but absolute acceptance as “judgement and hatred”, Power said that “progress is where we have to begin.”

“And progress, like the seeds of change, needs first to be sown,” she continued. “We need to plant this flag, and by doing so, cultivate love, the acceptance of everyone, and that is what is put before you tonight. That option to start somewhere …”

Another delegate at the meeting offered this thought: “Policies that are put in place must include specific measures and explicitly address homophobia. The GSAs [Gay Straight Alliances, LGBT ideology clubs for students] were a great first step. However, they obviously haven’t been enough and a decade has passed since their inception.”

The Halton branch of PFLAG Canada also indicated that have the pride flag flutter proudly outside Catholic schools is only the beginning. The LGBT advocacy group issued a statement after the meeting to say that flying the pride flag and having “safe space posters” in the Catholic schools would be “an important first step” in including “their” community, that is, Catholic students who experience and embrace same-sex attractions or reject their own maleness or femaleness.

“The flying of the flag during Pride month and having safe space posters within classrooms is an important first step toward inclusion for our community in these schools,” PFLAG Canada Halton stated. “We acknowledge the symbolic nature of the flag — it is a symbol of inclusion for our community and flying it at HCDSB [Halton Catholic District School Board] sends a message that 2SLGBTQ+ youth are welcome to be who they are in these schools.”

The organization, which is affiliated neither with the school board nor with the Catholic Church, went on to object to the appearance, at the meeting, of a delegation from a Catholic organization that ministers to people with same-sex attractions who wish to be chaste and remain faithful to Christ, Courage International. PFLAG Canada Halton also lied about Courage by saying it is a “conversion therapy program.”

Courage is not a so-called conversion therapy program.

“We were deeply disturbed that the Board saw no harm in allowing a delegation presentation advocate for Courage International — a known [sic] conversion therapy program that the Southern Poverty Law Center in the US has listed as one of the ten most prominent anti-2SLGTQ+ organizations,” PFLAG Canada Halton wrote, and even described their Catholic rival’s presentation as “a hateful diatribe.”

In fact, the LGBT activist group saw both the inclusion of chastity-promoting Courage and any opposition to the flag-and-signs measures as “a disturbing reminder” that the children the organization identifies as “2SLGBTQ+ youth” are “marginalized within the HCDSB.”

The grim, angry tone of the letter (below) was personified in the grim, angry faces of LGBT activists, young and old, during the Halton Catholic school board meeting.

Meanwhile, the left-leaning, Pride-marching Ontario English Catholic Teachers Association (OECTA), whose letterhead now contains an approximation of the pride rainbow, also called the motion to lift high the flag “just one progressive step we can take as a board to show that we are allies and welcome and accept everyone in our school communities.” In an April 20 letter to the Halton Catholic board’s trustees, OECTA claimed to be writing on behalf of 3,000 Halton Catholic teachers “in support of the motion to fly the pride [sic] flag in June.” OECTA, too, objected to the oppositions to the proposal, saying that they demonstrated “exactly why we need to fly the pride flag in June.” It also suggested that not flying the symbolic flag would be siding with “hate and division.”

OECTA will be flying their “own rainbow-coloured flags in [their] offices as a sign of support to [their] members, students and the community.” This may inspire yet more Catholic parents in Ontario to home-school or make sacrifices to send their children to a private Catholic academy.

Unfortunately, the Diocese of Hamilton, to whose spiritual care the Halton District Catholic School Board belongs, has taken a position of neutrality towards the issue. In an April 16 memo to the archdiocese’s priests, Chancellor Monsignor Murray J. Kroetsch stated that it is not permitted to circulate petitions for or against the LGBT measures in the parishes.

“Furthermore, the motion before the School Board is not to be commented on in the Homily or the Announcements at Sunday Masses,” he wrote.

A source close to the Halton Catholic School Board who would speak to LifeSiteNews only under conditions of anonymity underscored that concerned Catholics must not lose sight of the real issue in the debate: not the flag, but the so-called “safe spaces” where Catholic doctrine must not be pronounced. This, he said, is what the LGBT movement wants for Ontario’s Catholic schools “and every school .”

To make your views respectfully known to the Halton District Catholic School Board, please either apply to become a delegate at the next meeting — May 4, 7:30 p.m. — or contact one or more of these nine trustees: