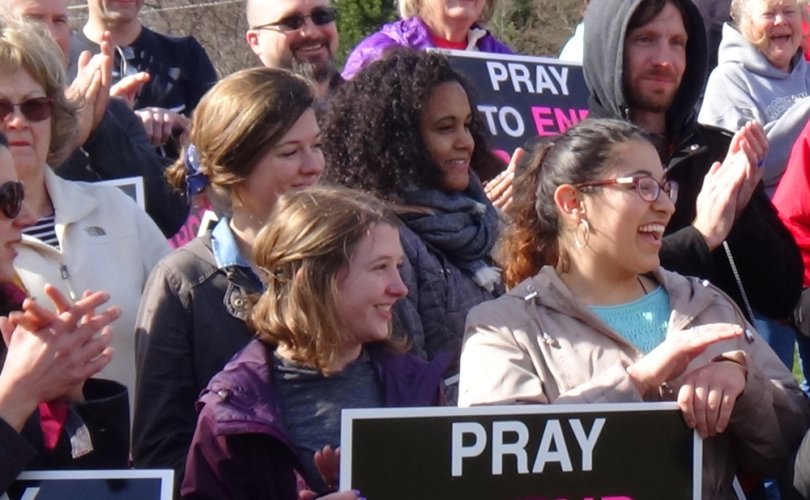 FLINT, April 16, 2019 (LifeSiteNews) – Pro-lifers turned out in a strong presence outside a Planned Parenthood facility in Michigan on Saturday as part of a national campaign to protest the nation’s largest abortion chain.

About 80 pro-life advocates showed up in Flint, Michigan, outside the local offices of Planned Parenthood on the afternoon of April 13. Representatives of Flint-area Right to Life and Black Americans for Life said that participants came from as far as 40 miles away to show their support for the sanctity of human life at all stages and to condemn federal subsidies of the abortion provider.

Matthew Smith, a member of the school board of nearby Davison, Michigan, who is on the board of Flint-area Right to Life, led the crowd in chants outside the facility.

“Life begins at conception. We all have to do our part on this earth to make that known. Because Judgement Day is coming, folks, and we don’t want to be part of the murder that’s taking place here at Planned Parenthood,” he said in an interview with LifeSiteNews.

Smith said that at least seven babies were killed that day at just one abortion facility in Flint.

“The unborn have no voice. We have to be that voice. And that’s why we’re here today,” Smith said. State and national politicians should heed President Donald Trump’s call to defund Planned Parenthood, Smith said. He said that by educating people, especially the young, about the realities of abortion that opposition to abortion may be enlivened. Indicating that high school and college students were present at the demonstration, Smith credited the movie ‘Unplanned,’ which depicts the conversion abortion manager to the pro-life cause, for increased interest.

When asked what pro-lifers can do to convince women who may be considering abortion, Smith said that pro-lifers offer resources to mothers and point them in the right direction to make them successful.

“You have to give them comfort. You have to let them know they are not alone in this fight,” he said. “We let them know, ‘We are with you in this. Your child can grow up to be very successful. You can be a part and watch your child grow up, and we will be there with you to get you on your feet.”

LifeSiteNews interviewed one of the demonstrators, Cornel Lynch, who identified himself as a social worker. He said that he realizes that single-motherhood is difficult, recalling that his own mother aborted his sister out of perceived need. “So many lives have been lost to abortion. Especially here in Flint and in the African-American community.” He asserted that abortion is the “number one killer of African-Americans.” Lynch said that this was the first pro-life rally he has attended, having been encouraged to come after seeing posts on social media.

Nearby, at the Women’s Center of Flint and Saginaw, abortion services are provided five days each week. The center’s website offers financial assistance to those seeking abortion. At the Planned Parenthood facility, “in-clinic” abortions are offered by appointment. There are several abortion providers in the area.

In the zip code served by the abortion center, about 53 percent of the population consists of African-Americans. In 2017, about 41 percent of the population lived in poverty while median income was about $26,000 per year. Flint saw the foundation of General Motors in the early 20th century and was once a thriving city that afforded good incomes to working people. Since the 1980s, the city has been in precipitous decline and noted for crime, outmigration, and a municipal water system tainted with toxic lead.

As cars honked their horns and drivers waved to the protesters, rally goers waved placards and called on motorists to show support. Young protesters told LifeSiteNews that they had come from local high schools, community colleges, and Kettering University.

The local office of Planned Parenthood was brought to Flint in the 1960s by Stewart R. Mott, the scion of millionaire businessman and philanthropist Charles Stewart Mott. The younger Mott was notable for his hefty financial contributions to liberal candidates of the Democratic party, filmmaker Michael Moore, as well as progressives and LGBTQ causes. Mott also traveled throughout the U.S. in support of Planned Parenthood, abortion and contraception. The elder Mott helped to found and shape General Motors, as well as the Mott Foundation, which has been a significant force in Flint for decades.