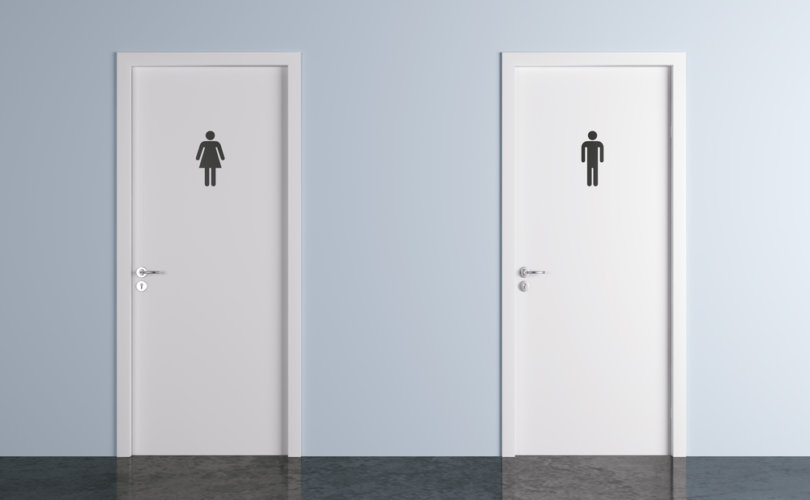 August 5, 2016 (DailySignal) — The U.S. Supreme Court signaled an interest in taking on the transgender bathroom debate on Wednesday, granting a Virginia school system temporary permission to keep its bathrooms separated by biological sex.

In a 5-3 vote, the justices issued a stay in the case involving a transgender student in Gloucester County who is suing his school board to gain access to the boys’ restrooms. The stay halts a lower court’s order that said the school board must allow the transgender teen, Gavin Grimm, into the bathroom that corresponds with the student’s gender identity.

Gavin, 17, was born female but now identifies as a male.

If the Gloucester County school board’s petition for the Supreme Court to hear the case is denied, the stay will terminate automatically, and Gavin will be allowed to use the boys’ bathroom. If the court decides to take the case, the stay will remain in effect until the justices reach a final decision.

The lawsuit alleges that by prohibiting Gavin from using the boys’ restrooms, the school board’s policy violates Title IX, the federal statute that bans discrimination on the basis of sex.

The U.S. District Court in Eastern Virginia initially rejected that argument, and sided with the school board’s claim that Title IX does not protect against discrimination based on gender identity. The U.S. Court of Appeals for the 4th Circuit disagreed, and issued an injunction that required the school to allow transgender students to use restrooms in accordance to their gender identity.

Some in the lesbian, gay, bisexual, and transgender movement downplayed Wednesday’s decision, calling it “just a temporary delay.”

“Across the country, courts and policymakers are recognizing that discrimination against transgender people is sex discrimination,” Shannon Minter, legal director for the National Center for Lesbian Rights, said in a prepared statement. “We are confident that if and when this issue reaches the Supreme Court, the court will affirm that recognition.”

Conservatives, however, call the decision a significant step in their direction.

“It’s significant that the Supreme Court said we’re going to put a hold on that — we’re going to preserve the status quo as it’s always been in society, as it’s always been in schools,” Jeremy Tedesco, a lawyer at the Christian legal group Alliance Defending Freedom, told The Daily Signal. “That boys use boys’ restrooms and girls use girls’ restrooms.”

The implications, Tedesco added, could reach far beyond Gavin and other students in Gloucester County.

In directing schools nationwide to open their showers, bathrooms, and locker rooms to students of the opposite biological sex, the Obama administration cited the Gloucester case.

The Department of Education wrote that its interpretation “is consistent with courts’ and other agencies’ interpretations of federal laws prohibiting sex discrimination,” and linked to the case.

A total of 24 states are now challenging the legality of the administration’s mandate, in addition to dozens of private legal battles playing out nationwide.

“The Department of Education — in all the litigation that’s going on across the country and in their major, chief mandate that they sent out nationally to all the schools saying that Title IX requires schools to allow students of one sex to enter locker rooms and bathrooms of students of the opposite sex — they’re all relying on the Gloucester decision from the 4th Circuit to say that’s required,” Tedesco said. “What the Supreme Court has done is thrown that decision into serious doubt.”

Tedesco, who is involved in several of these challenges, said the decision is “a really important outcome” for Alliance Defending Freedom’s case in Illinois.

In that case, 50 families in the Chicago area are suing the Department of Education and the Justice Department for threatening to take away federal funding if the school does not comply with the Obama administration’s interpretation of Title IX.

Lawyers for the Obama administration, Tedesco said, “have been citing the Gloucester decision over and over again for why they should win.”

Now, he said, “it’s going to be a lot more difficult for them to rely on that case, with the Supreme Court putting the entire decision on hold and calling it into question.”

Gloucester County, located about 140 miles south of Washington, D.C., and just north of Newport News, Virginia, has more than 5,000 students in its eight public schools.

My thoughts on yesterday's “emergency stay” by SCOTUShttps://t.co/RF8zr2cP5W

Josh Block, a lawyer for the American Civil Liberties Union representing Gavin, said he was disappointed by the decision because it will leave Gavin isolated from the rest of the student body.

Gavin was preparing to begin his senior year with a fresh start. He would finally be able to use the restroom without being isolated. Even if the Supreme Court ultimately decides to let the lower court’s decision stand, Gavin will have had to spend most of his senior year forced to use a separate restroom from the rest of his classmates, simply because of who he is.

The high court’s four conservative-leaning justices all voted in favor of the stay. They were joined by Justice Stephen Breyer, who wrote that he granted the stay “as a courtesy” in order to “preserve the status quo.”

Only four justices are needed for the Supreme Court to review a case, making it likely that the bathroom fight could be decided soon.