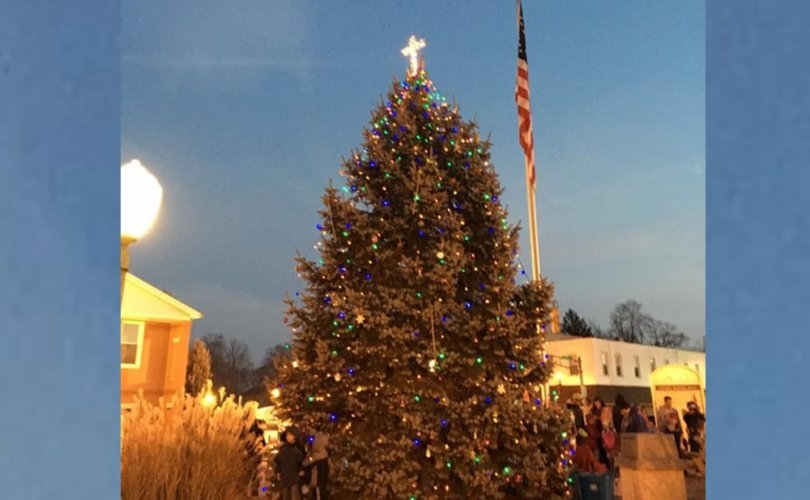 KNIGHTSTOWN, Indiana, December 20, 2016 (LifeSiteNews) — When residents of Knightstown, Indiana, learned to their dismay that council members had caved into removing a large illuminated cross from the town’s enormous Christmas tree after the threat of a lawsuit, they decided there was only one way to fight back. They banded together to put crosses in their windows and in their yards, letting the world know that they would not let “Christ” be taken out of Christmas.

“The Cross will come down, but we can still light the town with crosses,” a local Facebook post  declared. “Look on the bright side, instead of just one cross, we can now have hundreds, we can light them everywhere in town.”

Earlier this month, the town council representing 2,100 residents ordered the removal of the cross after the American Civil Liberties Union (ACLU) filed a suit on behalf of resident Joseph Tompkins.

The suit claims that since the cross is the “preeminent symbol of Christianity, representing the instrument of the crucifixion of Jesus,” it is a religious symbol that has no place on town property.

Tompkins claims in the suit that every day he is “forced to come into direct and unwelcome contact” with the cross on top of the tree as he drives through town. He claims this has caused him “irreparable harm,” which can only be remedied by removing the cross and paying him monetary damages.

But town residents including Tompkins’ relatives had trouble believing the cross was hurting anybody.

Despite reporters not being able to find anyone there who supported Tompkins’ case, officials capitulated to the threat, saying the town could not afford a legal battle that they might lose.

“It is with regret and sadness that the Knightstown Town Council has had the cross removed from the Christmas tree on the town square and is expected to approve a resolution at the next council meeting stating they will not return the cross to the tree,” the town council released in a statement.

When residents realized there was nothing they could do about the removal of the cross, they came up with a plan to blanket the town in crosses.

Residents made wooden crosses that volunteers handed out to anyone who would take one. Crosses soon started popping up throughout the town, in yards, on doors, and in windows. Many of them were illuminated with Christmas lights to shine brightly in the night.

Residents hope to have crosses placed throughout the town in time for Christmas Day.

“Honestly, I would love to see every house in town put a sizable cross on full display,” one resident wrote on a blog.

The resident hopes that having Donald Trump as president — he has stated that America will start saying “Merry Christmas” again — will help restore religious liberty to their town.

“[When] Trump takes office and as Christians, we will no longer fear retribution for saying Merry Christmas or for praying in school, or for keeping God in our pledge,” the resident wrote on a blog.