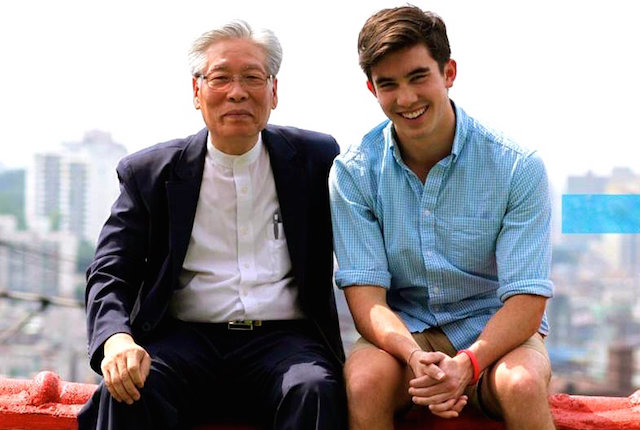 March 3, 2015 (LifeSiteNews.com) — Brian Ivie, 25, grew up in California dreaming about making movies. He loved making homemade movies with his friends and eventually went to school to learn how to make them professionally. He was always on the lookout for that one story that he would turn into a movie that would be his ticket to the Sundance Film Festival and rocket him to fame and fortune.

While flipping through the L.A. Times one morning in June 2011, Brian came across the story of a man in Korea who saved unwanted babies by having a baby box installed on the side of his home where parents could drop them off anonymously.

“That alone was compelling to me, the fact that this existed at all,” he told LifeSiteNews in a telephone interview.

Brian immediately saw the story’s potential. Here was the golden opportunity he had been looking for. He contacted the reporter who put him in touch with Pastor Lee Jong-Rak of Seoul, South Korea, the man behind the drop box.

Six months later he was flying to Korea with a team of friends to film a documentary.

“I went to Korea, planning to use this family to be my golden ticket to Sundance,” he said.

Before leaving, Brian picked up a cheap cross necklace so he could wear it to create “some sort of trust between me and this Pastor.”

“I didn’t really know what the cross meant. I just knew that it was this rallying cry for Christendom,” he said.

Brian had grown up thinking he was basically Christian, but having a real relationship with God was something that he had never factored into his life.

“I just figured I was a Christian because I didn’t smoke cigarettes, and I watched Fox News with my mom. It was a very cultural label for me. It was a very decorative thing, like a decorative cross you put in the house, but you have no understanding of what it is.”

“My understanding of God, because of the media, was very warped,” he said.

When Brian arrived at Pastor Lee’s home in Seoul, what he experienced made him rethink his entire life. In Pastor Lee, Brian encountered a man who had been rescued out of the gutters of alcoholism and rage to do a work that most people would recognize as utterly selfless and heroic.

“He was not a natural born hero. This is an ordinary man who made a lot of mistakes and needed forgiveness, and once he received that and was saved from his own sin and from hell, then he went out and saved and rescued other kids,” Brian said.

Pastor Lee created the baby box because of the number of babies being abandoned on the streets, many of them dying from exposure before help arrived. The baby box would be a safe harbor to welcome and care for these babies. More than 600 babies have now come through the baby box.

“They’re not the unnecessary ones in the world. God sent them here for a purpose,” Pastor Lee says in the film.

Brian returned to California with his footage, but he was constantly haunted by what he had witnessed in Pastor Lee. He felt like something was missing from his own life, but he could not put his finger on it. Then one day while listening to a podcast about why Jesus died, he suddenly realized what that was.

“This podcast was all about how Jesus Christ took our place. When I heard that, it was like a movie through my own head.”

Brian started imagining Jesus suffering in his place for the six years he had been addicted to pornography, for his abusive relationships with girls, and for his loud and violent outbursts of anger toward his friends, girlfriends, and co-workers. He saw Jesus take it all upon himself and suffer for it all on the cross.

“So, I broke down. I started crying. All I could say was: ‘I’m sorry, I’m sorry, I’m sorry.’ Even for a guy who didn’t lead some extreme life — I wasn’t the leader of some Mexican cartel, I didn’t almost overdose on heroine, I didn’t murder anybody in cold blood — but I needed to be forgiven, because I had done some shameful things, especially towards God. I realized all that, and knew that I needed to be saved too.”

“I hated myself for a while. But what changed all that was the Father’s love which said ‘I still want you, and in fact, I want you so much that I sent my Son because I’m willing to give everything for you, even though you don’t deserve it.”

Brian began connecting the dots between his filming in Korea about the drop box for babies and his own need to be saved.

“The drop box symbolized that to me because it’s the place where you are bound up in the dark, totally helpless and incapable of doing anything about it, and you need a father to come pull you out through the laundry room and into the light,” he said.

With his new spiritual insight, Brian traveled back to Korea in August 2012 to retell the story, this time from the perspective of love.

“The goal was to tell the story that I had experienced of the Father’s love as shown through this man, Pastor Lee.”

Brian’s film The Drop Box, released through Focus on the Family and Pine Creek Entertainment, has already won numerous awards at film festivals. It is opening this week in 800 theaters across North America.

Brian now realizes that his biggest mistake in life is thinking he was too good to need God’s forgiveness.

“My hope is that people realize that they need to be saved and that they would see themselves in these kids and God as Pastor Lee. Because to me, he's living proof of a loving God, and God is putting himself on display through this man.”

“What I see in this film is a man who has given up everything in his life for these children who have been lost on the street. I hope what people see is a picture of something much higher than that, which is really God giving everything on the cross for all of us lost people,” he said.

This pastor is saving hundreds of lives with his ‘Drop Box’: Now his story is coming to the Big Screen