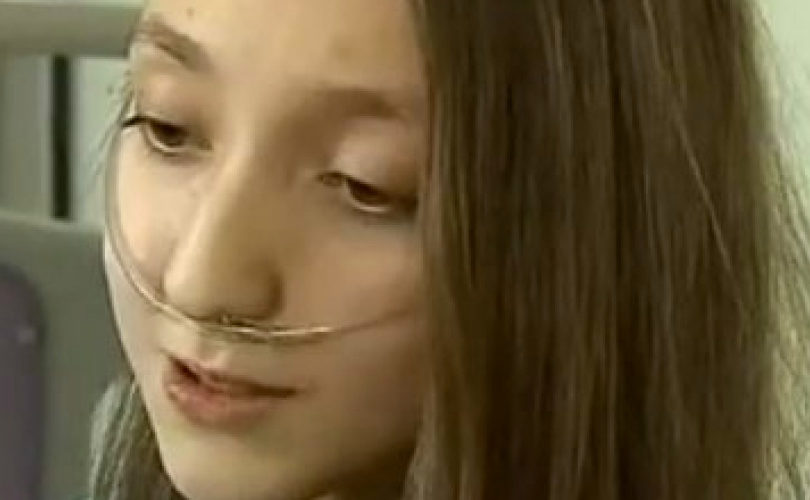 Valentina Maureira decided she did not want to die from euthanasia, but her father says the socialists are twisting her memory to promote the culture of death.

SANTIAGO, May 18, 2015 (LifeSiteNews.com) – “I am Valentina Maureira. I am 14 years old. I have Cystic Fibrosis. I ask to urgently talk to the president, because I’m tired of living with this illness and she can authorize for me [to receive] the injection to fall asleep forever.”

These were the words in a viral YouTube video that sparked international controversy this February. Euthanasia is illegal in Chile.

Valentina got the idea to ask for a lethal injection from Brittany Maynard, a terminally ill patient who moved to Oregon because the state legalized assisted suicide. Maynard died from the procedure last year. But unlike Maynard, Valentina later changed her mind about her request.

“She is now determined to fight for her life and those of other children suffering from her same serious illness,” said her father.

Despite her dying wishes, her dramatic case was used to promote euthanasia in Chile.

Although the government had said last November that euthanasia was not going to be a legislative priority, Senator Guido Girardi from the Party for Democracy – a member of the Socialist International – used Valentina’s case to argue for “people’s right to decide against therapeutic obstinacy…when a person eventually wants to not submit herself to treatments – we are in favor of that.”

Senator Fulvio Rossi, from the Socialist Party said that “Chile must have a law to allow assisted suicide for terminally ill patients who want to die, to avoid the unbearable pain of a terminal illness.”

He had been trying to get in touch with the Senator to obtain help for his daughter’s treatment.

“I am very upset because 20 minutes ago I got a phone call from Senator Guido Girardi’s secretary, and I told him, 'Tell him to call me, because I mailed him last year.' This year, I also sent him letters asking him to please be received by the president. And this person calls me, the secretary. Why now? Why do you want to cling on to my daughter now that she is known worldwide? “

Mr. Maureira had contacted all of the 38 senators asking for help for his daughter, only five replied. He sent 20 letters to president Bachelet during her first term and one more during her second term.

The Maureiras already lost a son to cystic fibrosis, before Valentina was born.

Several national and international outlets picked up on Valentina’s story, after she uploaded her death plea to YouTube.

The president also visited her at the hospital, where Valentina handed her five petitions: a marathon to raise awareness, the building of homes and a hospital for those suffering from cystic fibrosis and to publish a book and a movie about her story, nothing about people’s “right to die.”

Her father, in an interview, lamented that when Valentina was asking for help to live, she was ignored, but when she asked for help to die, the world turned up on their doorstep.

Valentina Maureira died of natural causes on May 14.